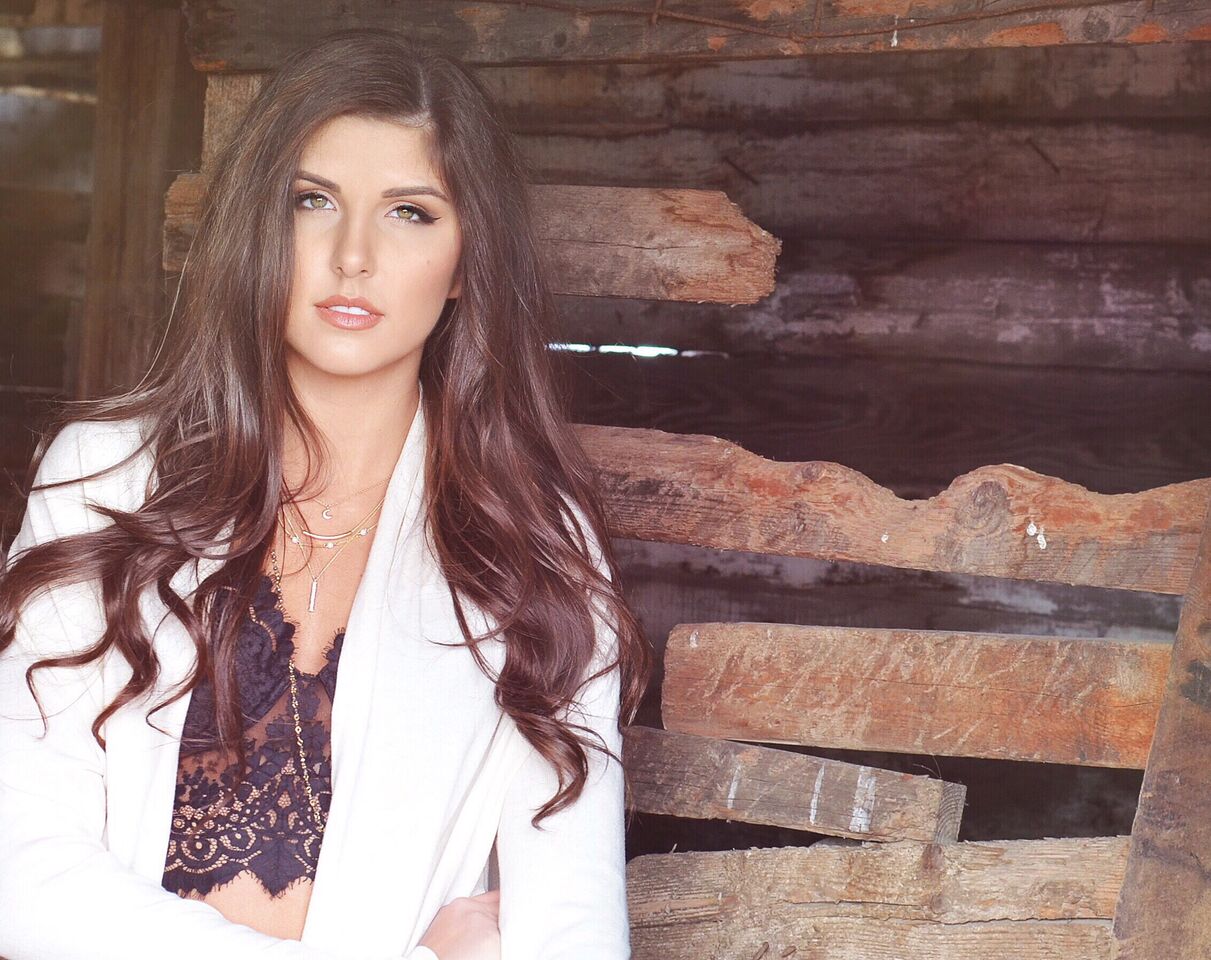 Edmonton AB based country artist, Alee is about to release her debut EP, “Say Hello To Goodbye” through Wax Records on July 10th. In anticipation for this, as well as some upcoming shows, including Canada Day in Saint Alberta, AB, Cavendish Beach Music Festival in Cavendish, PEI and Taste of Edmonton Festival in Edmonton, AB, we were able to ask her a series of questions about her background, her new music, and much more!

If you’re a fan of country music, and have yet to hear about Alee, the time has come that you need to learn more, and I can guarantee you won’t regret it! She’s definitely one of the country stars that are on the rise in Canada, and also a two-time winner of the ACMA Female Artist of the Year award.

At what age did you know you wanted to pursue music as a career path?

By the time I was 6, I was convinced music was my career path. I vividly remember writing in my diary that I was going to be a “pop star” haha! (like most young girls at the time – surrounded by the stylings of Britney Spears, Christina Aguilera, and NSYNC*). I grew up on the stage; dancing, classical piano, and then eventually singing & picking up the guitar. The stage has been my second home for as long as I can remember. It was around 14 that I was seriously using all of those skills to create something on a larger scale than just a hobby… it came together so naturally, like it was the plan right from the start.

You have made a name for yourself in the Country music community, being a two-time winner of the ACMA Female Artist of the Year award and landing a record deal with Wax Records, what has been the highlight of your career up until now?

It has been an amazing journey thus far, and I am grateful for every opportunity that has come my way. There have been so many highlights, from being in the studio, hearing the songs on the radio, shooting videos, playing live shows, and signing to the label (to name a few) – but the one at the top of the list has been hearing back from the fans. Seeing the lyrics to my songs quoted on social media, and the e-mails I receive from them, letting me into their lives, and sharing how my songs have made a difference. That really hits home for me. As a writer (as well), there is nothing that means more.

You will be releasing your debut EP, “Say Hello To Goodbye” with Wax Records on July 10, what can you tell us about the writing process of this album?

There were a LOT of songs written in the past year and a half. I’ll start with that. Narrowing it down to 6 was extremely tough. Each song had it’s own unique sound and creation experience behind it. I am so thankful for the writers who sat down with me to create songs I am obsessed with. Many laughs were had, some tears, and some unforgettable moments, all which I keep near and dear to my heart. It has been an unreal process, and I wouldn’t have changed a thing about it.

You travelled to Nashville to record the EP with Dave Thompson (Lady Antebellum/ Autumn Hill) and also to Toronto with Jeff Dalziel (Autumn Hill), what was this experience like?

Both Dwave and Jeff are incredible. And it was so cool to work with both for this album. With Dwave, recording in Nashville was a complete dream. There’s something about that city that is just so magical, and I swear that bug catches you instantly. It’s like a super power – you can do things in that city that you never knew you had in you. I found that a lot while working with Dwave. As writer, you also hear the songs sounding a certain way in your head when you’re writing them…and it’s safe to say that he nailed that without me having to say a word. That’s true magic. And Jeff?! I can’t say enough about him! It is so cool to sit there and watch him work. It blows your mind. And then there’s that feeling when you hear the song played back for the first time before you sing the final vocal on it… there are no words to describe it, meanwhile you’re trying to hold your face from smiling so big so you can actually sing. I was constantly smiling…laughing…excitement level all the way to 11. Add on the cupcakes and unicorns, and scary movies to end off each day (I’m slowly learning to not cover my eyes/ears) and it is easy to say I had too much fun. These guys truly brought so much to these tracks. I am so proud. I love them…and hope the fans do, too!

Is there anyone else you’d like to have the opportunity to work with in the future?

I’ve got a list…a very long list. A couple producers, and artists to collab with, but songwriters seem to take over. I would love to be in a room and pick the brains of people like Caitlin Smith, Shane McAnally, Ashley Gorley,  and Jaron Boyer, to name a few.

You have released two singles from the EP, “Only The Strong Survive” and more recently “Moonshine”, how has the fan reaction been?

Incredible. I don’t know if there’s a better word for it. I always start the day with a lyric search – and am always surprised by how many new tweets/Instagram/vine posts I find. Both songs have been on stations’ “most requested” lists, and it’s cool to see them on the iTunes Top 200, and the radio charts as well. To have people connecting to music I’ve had a part in creating… that’s special. I think being able to share music is a gift, and one that I don’t take for granted.

Your music video for “Moonshine” has just premiered on CMT, what was the highlight of the video shoot?

A warm shoot location!!! I was beyond excited when LA was confirmed. My first-ever video shoot was outside on the coldest winter night, and then when we shot Only the Strong Survive in NYC it was pretty chilly as well. LA was perfection. The locations were stunning (including iconic shooting location at Vasquez Rocks, and of course, beautiful Joshua Tree). The team was incredible. Overall, it was a long, hot, but amazing day!

You have announced a few festival dates during the summer months, are there more to be released?

It seems that we’re constantly getting ready for more shows. And just when we wrap up, there’s a bunch more that appear. I’m so excited to get on the road with the guys (& Lauren) and share these new songs with everyone… it’s going to be an amazing summer to say the least!

When can fans expect a full Canadian tour?

Hopefully soon!! I don’t know if I can wait much longer to get out and meet everyone.

Currently getting ready for the summer shows, excited to release this album (finally!!), and already writing for the next. It’s non-stop these days…and I love it!

Here at Canadian Beats, we like to include a small portion of questions that may  help your fans learn something new about you, here goes:

What was the first song you ever sang in front of a crowd?

It would have been Adia – Sara McLaughlin, or Evanescence – My Immortal. Bet you didn’t see that coming!

If you were asked to do a duet with any fellow Canadian musician, who would you choose?

Chad Kroeger. Don’t laugh! I think our voices would sound really cool together.

Let’s say you were able to put together a festival, which Canadian bands/ artists would you want sharing the stage with you?

Love promoting Alberta. We’ve got a wicked-talented music scene. With that said… Brett Kissel, High Valley, Tegan and Sara, Ten Second Epic, Michael Bernard Fitzgerald, and Nickelback. Something for everyone.

Driving around with the windows down and the music cranked. If possible, doing the same on a boat!

None for this girl!…Unless you count my “girls like boys who ride in trucks”* temporary tattoo. You can grab one at any of my live shows! * from “Trucks” – This Road Goes Everywhere

I’m the worst at choosing just one, and it seems to change every day. But todays pick is… Buy Me a Boat – Chris Janson. If you’ve never seen that guy live, you need to add it to your to-do list immediately.

I seem to lose all track of time these days… It was either Roch Voisine, or John Fogerty.

Thank you for all of the love and support. This journey wouldn’t be the same without you! Love you all so much, and I cannot wait to see you on the road!