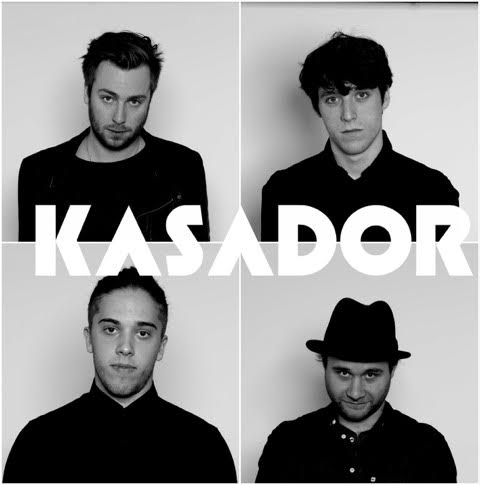 Kingston ON based band, Kasador, has just begun their summer tour. Will Hunter, Boris Baker, Cam Wyatt, Don Pineapple, and Nick Babcock started Kasador in June of 2012, after changing their name and their sound. In 2014 they released an EP titled “Last Summer”. To find out what else Kasador has been up to, check out this interview!

How has the tour been so far?

First few shows have been a good time! It’s been great to try out the new material we’ve been working on the past few months. I find it very nerve wracking playing songs that people haven’t heard, but we’ve had a great response with the new songs. Also had the pleasure of meeting some new bands we really like (Birds of Bellwoods, UKAE, Xprime, The Good In Everyone).

How would you describe your typical show?

I would say that the live show is all about making the songs come to life and engaging with the crowd.  We encourage dancing in a large way, especially with how our new tunes are shaping up!

Are you adding any more tour dates?

Yes actually, we just added Friday June 26th in Toronto at The Great Hall as support for Sea Perry. Really looking forward to that show, such a cool room!

What do you have planned for after the tour?

July we are in the studio for a few weeks. Our goal is to do a 10 song release sometime soonish…maybe… We don’t really have any deadlines, so we just want to take the time and make something we love. We are for sure going to have some kind of single out in the fall.

I started as an acoustic musician touring around Ontario, but I always have wanted to be in a band and realized the songs I was writing needed more musicians. So I posted on a Queen’s University message board (I was in my second year there) saying I was looking for a drummer. That’s how I met Don. Don knew Boris (our bass player). I met Cam (our guitar player) through a cover band we both played in briefly. Boris knew Nick (Keyboard/Piano) through mutual friends and hockey when they were kids. We’ve had a few people come and go, but writing with this most recent lineup has been great and way more natural then some of our writing in the past.

Why did you decide to change your band name and the sound?

We had been playing under my name for a few years, but had been talking about changing the name for a long time and in December finally decided to do it. We are really glad that we’ve changed it, kind of gives us more creative license to try new things as musicians as opposed to presenting our music as one person’s ideas.

I don’t think the name change really prompted any change to the sound, I think we would have developed these new songs under any name. So ‘changing the sound’ isn’t really the way I would describe it. We have been progressing and I’ve been moving away from writing on an acoustic guitar and trying things like piano or focusing more on guitar pedals and tones. Some of the new material is different, but it still sounds like us. I feel like the song parts are just more thought out and layered then our last release. Maybe being under a new name gives us more ‘freedom’ subconsciously, but it was never a deliberate move to change anything to the sound.

What would you say is the biggest accomplishment you have made as a band so far?

I know everyone in the band would probably have something different to say, but I am most proud of 2 things: 1) How quickly we have developed musically to our own sound. Everyone in this group comes from different musical backgrounds, so our sound is some kind of cocktail of different styles. 2) The number of incredible bands we have had the pleasure of playing with and becoming friends with. Canada is a big place and touring is tough, so it’s been incredible to meet bands from different cities and work with them.

Shows, record, repeat. Our focus has for the past few months has been writing songs we love, the end of the summer/early fall will be getting those songs into the live show.

The next few questions are going to be fun for the fans to get to know you better!

If each of the band members were a cartoon character who would they be?

I honestly have spent a long time thinking about this in the past and we have talked about it as a band, but I can’t seem to place these guys as cartoon characters because we are all pretty weird guys in really life.  The only one we can all agree on is Cam, who is Jughead from Archie Comics. He is very laid back; until it comes to food…he is always hungry!

Who would you love to share the stage with the most?

Having seen then last summer and loving all of their records, I’d say Arctic Monkeys. I know a few of the guys would disagree, but they (Arctic Monkeys) are one of my favourite bands and put on a great live show.

If you could play a show anywhere, where would it be and why?

It would be cool to play a major festival, but playing in smaller rooms and getting sweaty with the crowd is where we are most at home right now, so I’ll just say touring in UK and Europe would be the best. Just love that area of the world.

Is there anything else you would like to add and say to the fans?

We are so happy with how our EP was received and to see people coming to shows and singing along to songs. Knowing people appreciate what we do and make our songs apart of their day/evening/life is 100% the best part of the job. And that’s a total band cliché thing to say, but its true. We are really proud of the songs we have been writing and can’t wait to get into the studio.