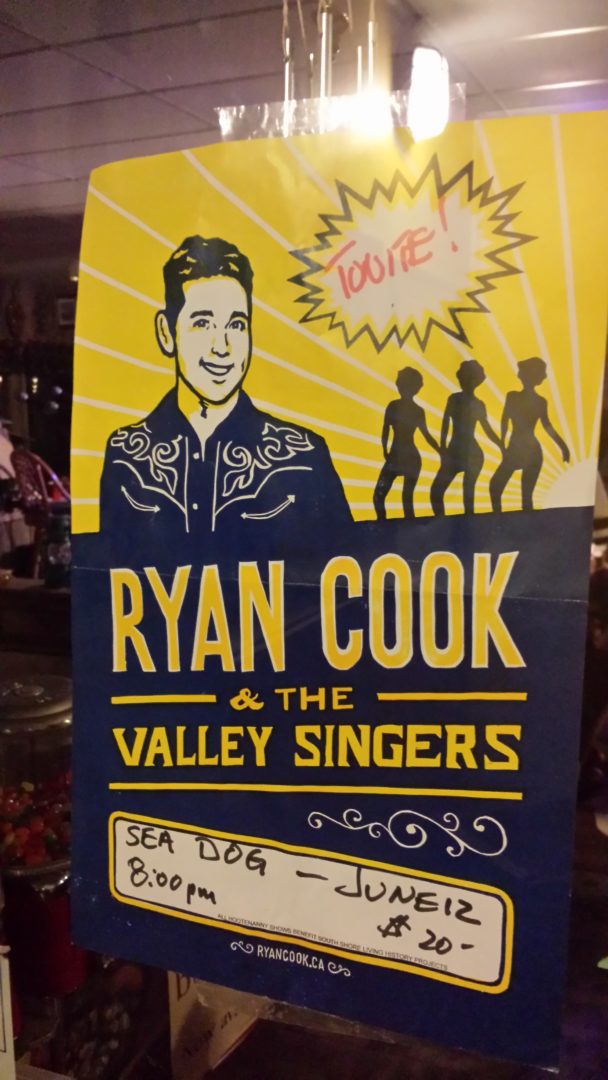 Who: Ryan Cook and The Valley Singers
When: June 12, 2015
Where: Seadog Saloon in Shelburne NS

Back in August, 2010 while attending the Cowboys & Rockstars show at the Yarmouth exhibition, I came across a talented local country artist, Ryan Cook, who was born and raised in Yarmouth, NS. Since that night, I have been trying to get to another of his shows, but there were always circumstances that wouldn’t allow, that is until Friday night, when my husband and I made the trip to Shelburne NS to see Ryan perform at the Seadog Saloon.

The atmosphere at the Seadog Saloon is something that we always enjoy, surrounded in antique nautical décor, and friendly staff…and Friday night was no different, we arrived early and ended up sitting right by the stage, with the company of two women who were a pleasure to chat with, from Scotland. 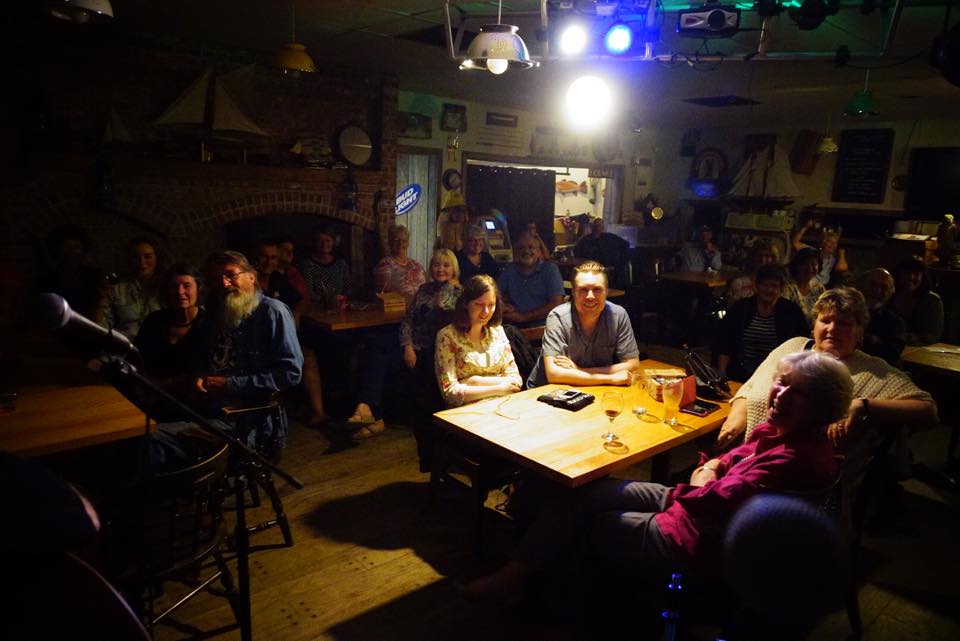 Ryan Cook and The Valley Singers (Ruth Manning & Terra Spencer) took the stage a little after 8pm, with Yarmouth based guitar player, Robin Dellinger. Robin was a special guest that night, because as Ryan states, “We can’t play this close to Yarmouth, and not ask Robin to join us”. It was a treat for all in the audience, which was approximately 35 people, making it an intimate show, which many in the audience referred to as a “Kitchen Party”.

The set list was the perfect mix of original songs and cover songs. In total, they played 22 songs ranging from Ryan’s early songs, to many classic country tracks. I was overjoyed when the second song began, and it was none other than “Sun”, which is off of Ryan’s second album, “Peaks & Valleys”. I found myself singing along with Ryan, as did many others in the audience. The Valley Singers added some extra harmonies to the song, which of course, only made it better.

Ryan made sure to cover all the bases, throwing in some Hank Williams, Merle Travis and Bob Wills, and it was clear he was impressing many, as I heard comment throughout the crowd saying how great he was at covering these classic country songs, at such a young age. 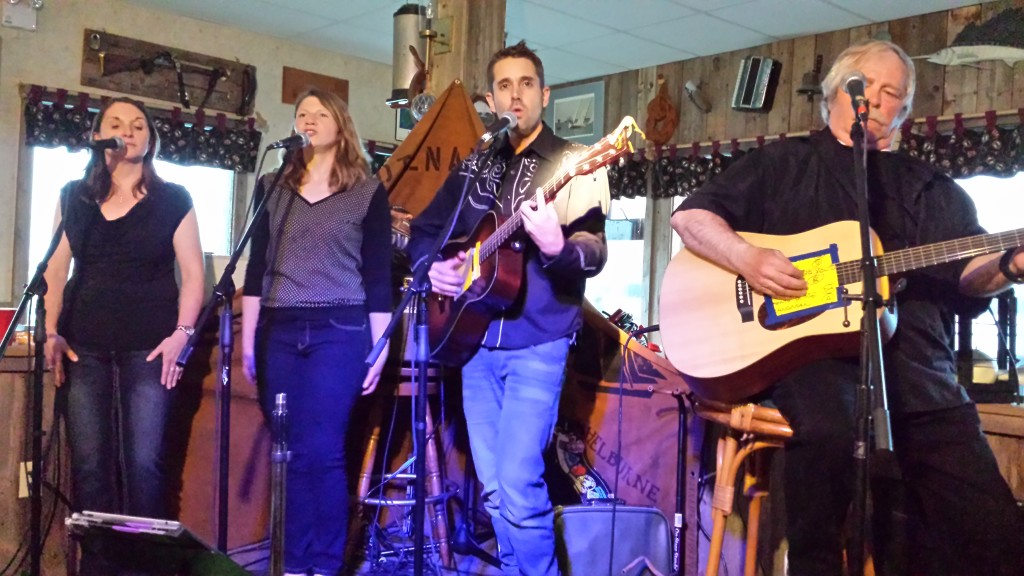 There were also some new tracks played, such as “Some Of That Stuff” which Ryan encouraged the audience to sing along with on the chorus, and of course, we all did. Another new track was “Lil 4 Speed Toyota” which was introduced by saying it was a song about a Japanese beauty….which we came to figure out, was a Toyota!

There was a brief intermission, which gave the audience a chance to chat with Ryan, and buy merch…which I did. On top of this, I was able to get a photo with the man himself, and I had a nice time chatting with him. He was very friendly and down to earth, which you can see while he is on stage as well, always filling in the gaps with brief comedic interludes. 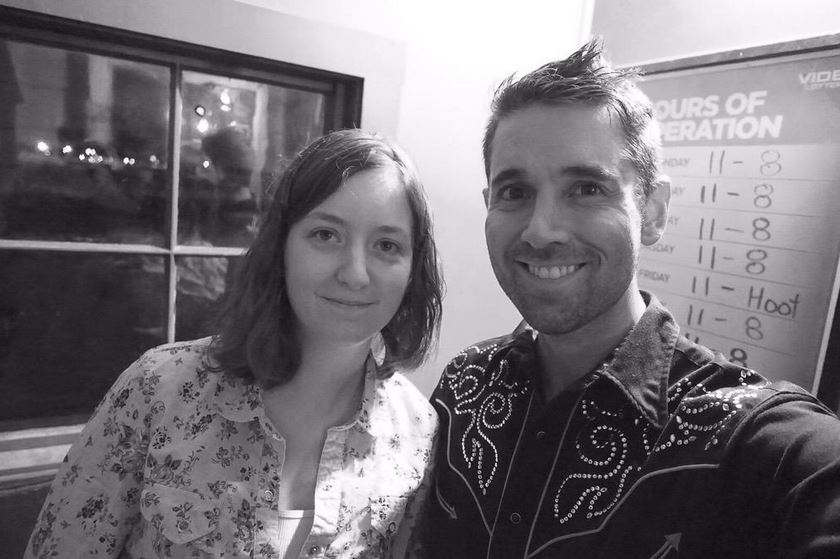 The 2nd set began at 10pm, and Ryan stated it would be longer than the first, and the crowd applauded. Everyone was thoroughly enjoying the show, and we all came to feel like we were closely acquainted as the night went on.

This set was just as awesome as the first, with many more original tracks, including “Wild Side Of Town”, “Gaspereau Valley” and also the track, “Dead Like Me” which Ryan told us was inspired by the classic horror flick, “Night Of The Living Dead”, bringing my husband  to applaud, being a fellow fan.

There were three highlights to the show, one being when Ryan performed one of the songs from “Wrestling With Demons”, the track was certainly a crowd favourite causing many of us to laugh, and have a toe tapping good time. The song I’m speaking of is “Lulu Lemon”, and I was happy to get a video clip of this for you all to see! As you can see, the band was having fun with it, and the crowd was thoroughly enjoying it.

At the end of the show, the band did a medley of classic country tracks, which my husband dubbed, “The History of Country”, and I found quite a suitable name. Some of the artists that were covered during this “extended thing” as Ryan called it was Jimmy Rogers, Dolly Parton, Patsy Cline, Johnny Cash and Nova Scotia’s own Clarence Eugene “Hank” Snow. Everyone in the building enjoyed this and wanted more, and Ryan went along with it, finishing up with the classic Willie Nelson track, “On The Road Again” filling it with some comedic relief, making the room roar in laughter.

I was waiting all night for the next song, which was the song that made me a Ryan Cook fan in the beginning, from his album,  “Hot Times”. Of course, I’m talking about “Pretty Sure” which he always changes up a bit depending where he’s playing, and is definitely one of the tracks I would highly recommend to anyone, whether you’re a country fan or not. 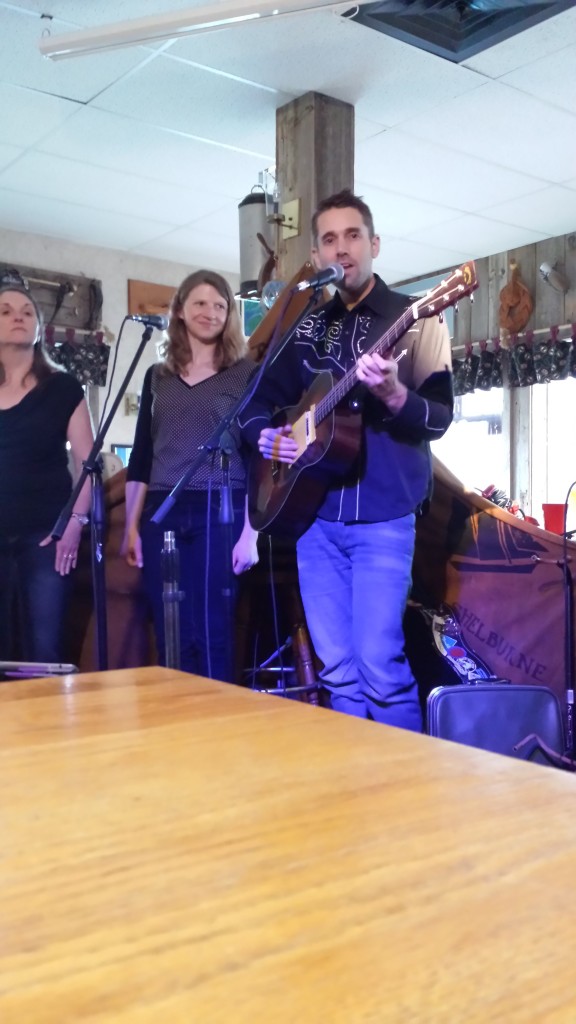 If you ever have a chance to see Ryan Cook & The Valley Singers, you shouldn’t pass it up. It’s a great time, had by all.