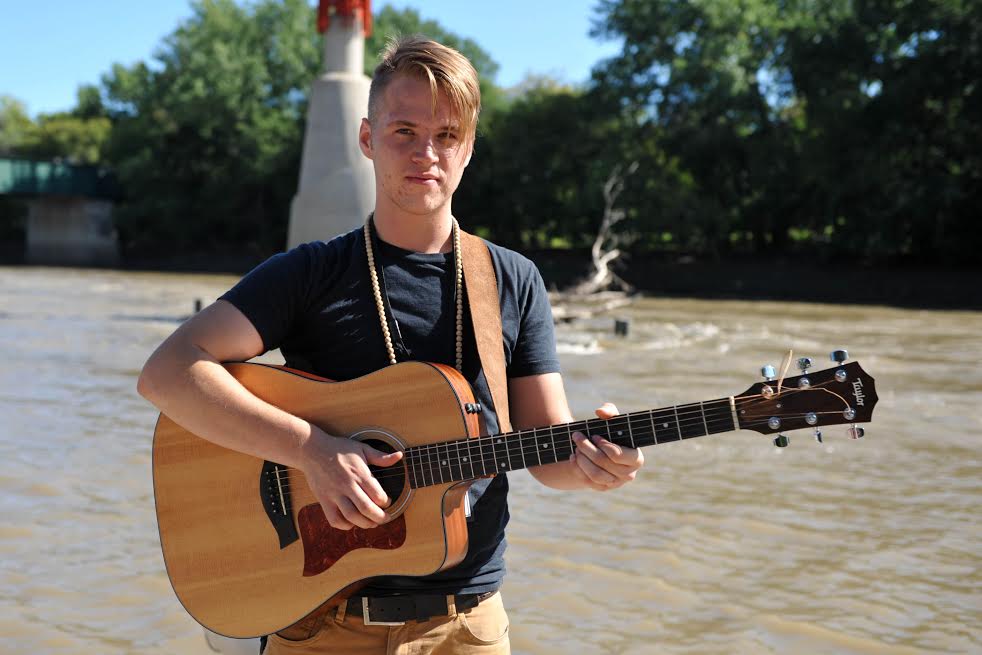 Regina, Saskatchewan based folk artist, Keiffer Mclean  is a force to be reckoned with. He released his album in March 2014, and is to be performing at Café Deux Soleils in Vancouver on June 17, accompanied by bassist, Danny Jones. I had the chance to ask Keiffer a series of questions about his background, his music and lots more. Be sure to read below to learn more about this young Canadian artist.

At the age of 21 you have made quite the name for yourself, at what age did you begin pursuing music?

How has your songwriting changed over the years?

In a sense it’s never really changed. I’ve never limited myself to a formula or particular process. To me; songwriting is solving riddles of the subconscious mind. The songs are already there. You just have to figure out how to get them. It’s kind of like chess; you can’t make the same moves each game without considering opposing shapes and patterns.

Inspiration comes anywhere at all, really. I like to consider myself a thought poacher rather than just a writer. Lots of my ideas come from daydreams. I try and snatch up scenarios from that weird headspace when your mouth is gaping and somebody thinks you are staring at their breasts, but actually you are pondering the old man’s hair cut that floated around like a rain cloud at the gym earlier that day, and I wonder if it’s still going to rain today? Better drive to Ryan’s house because if I bike my seat will get wet and I don’t have a rain coat…

You released your debut full-length album, “Drama in the Attic” on March 18, 2014, how was the response for the album?

I was very happy with the response. People embraced it and helped spread the word, which is usually a good sign. It also got positive attention from some of my favourite mags and stations such as Exclaim!, Top 100 Canadian Singles, and even CBC.

How did you come up with the album title?

I was driving to Calgary for a show. I was somewhere along the horizon and where I was. I happened to be day dreaming, again. I was speculating on the word attic for some reason at all, and it occurred to me that the words “drama,” and “attic,” nidificate within the same word “Dramatic.” The simple epiphany spiraled further zoning out. Basically it translates to “Chaos of the Mind”, which made sense to me as the tunes were a collection mental macramé.

You garnered a great amount of recognition from the album, what has been the highlight of your music career, up until now?

It honestly changes all the time depending on what my circumstances inspire me to remember. Today I look back on touring to New York and back as one of my favourite memories. It was a great feeling being so far from home with an actual purpose.

You have performed at several large festivals, including JUNOfest, Regina Folk Festival, Lilac Festival and many more, can fans expect any festival dates this summer?

Speaking of shows, you have announced a slew of dates on your Jive Turkey Tour, including dates in Saskatchewan, British Columbia & Alberta, can fans in the rest of Canada expect any tour dates in the near future?

Yeah, I’m currently trying to set up some international dates with a company called extreme tours. They have accepted my application as an artist on their roster. Depending on availability I am hoping to get to some funky places like Alaska, Iceland and even Europe.

You will be accompanied by bassist, Danny Jones (Regina Jazz Orchestra, Regina Symphony Orchestra) on these tour dates, is there anyone else you’d like to work with in the future?

Absolutely, I want to work with tones of people. I am currently trying to set up a show with a 12-piece ensemble of classical instrumentation as well as a dancer from Ryerson University, right now!

What can someone expect from a live Keiffer Mclean show?

I like to try and put on an intimate show with lots of twists and turns. I hope to confuse people and lead them into corners of nonsense that will leave them tipping their dunce caps to infinity and beyond. I call the genre ‘Crooked Baritone Folk,” and It usually proves to be a pretty dynamic performance as my songs are a blend of mellow/upbeat tunes.

After my stretch of tours coming up here I plan on purchasing an RV so I can live, travel, write, and perform all over Canada and the US wherever and whenever I want!

If you could give any advice to a young artist starting out, what would you say?

Befriend your local talent. One of the perks of this business is that your competition doesn’t have to be your enemy because art is art right? Help each other out. The music industry is like a small town.

Here, at Canadian Beats we like to include a portion of questions that may help your fans learn something new about you, here goes:

What was the very first concert you ever attended?

If you were able to put together a festival lineup, which other Canadian bands/artists would you want performing along with you?

What is one lyric that speaks to you? (Not one of your own)

“Woke up early feel that itch, what am I doing up in this niche? Do I belong? Who is it that I am? What is it that I’m for? Who’s that in my skin? Has he done much for me? What is it that he says? Does he talk about me? When will I learn not to think of thinking? And think, doing is doing. Doing is nothing. Nothing is doing; while you don’t do.”
-Juan Wauters

If we were to find you on a day off, what could we find you doing?

On my day off you might catch me eating sushi; if I have money that day. Mostly I just walk around aimlessly in my free time. I love to sk8 board and yoyo too! I love to shoot arrows and to try new things. Sometimes I have friends too.

What is your guilty pleasure song?

My guilty pleasure song would have to be “Daddy’s Girl,” by Red Sovine.

To my fans: Welcome to infinity! 🙂