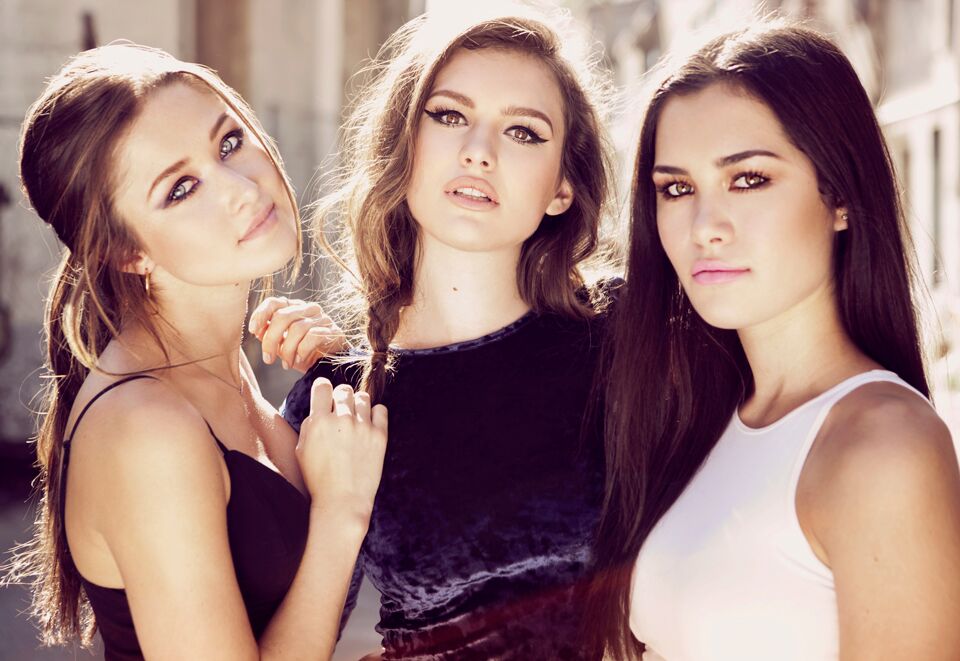 I’ve recently had the opportunity to interview one of the newest bands to sign with 604 Records, The Katherines. The trio is made up of Kate Kurdyak, Lauren Kurdyak and Kaitlyn Hansen-Boucher. They released their debut single, “Cherry Lips” on May 26, along with a lyric video, which you can see HERE!

Find out more about this talented up & coming Vancouver trio now!

How did you choose the name, “The Katherines” as your official band name?

We had a super hard time picking the name. Charlie Kerr of JPNSGRLS actually ended up coming up with the idea for The Katherines and we all loved it.

When did you realize you wanted to take your music career to the next level?

In grade 11 we entered in BC’s Best Teen Band Contest and starting learning a lot about the industry. When we won the contest I had this moment where I was like “Ok, this is what I want to do for the rest of my life. How am I going to make this happen?” Since then it’s just been about trying to figure out an answer to that question.

The three of you have been performing together for years, how is it being in a band with your siblings and best friend?

It’s the best thing you can imagine. There’s something so comforting about having your two favourite people in the world up there with you. We feed off of each other’s energy on stage. Having Lauren and Kaitlyn at rehearsals and in meetings always makes everything feel less like work and more like fun.

Growing up I listened to a lot of classical music because I was learning the violin and played in different orchestras and ensembles. Lauren and my parents are big classic rock people so Fleetwood Mac, Queen, or Aerosmith was always blasting in our house. For me personally I get really obsessed with an artist or an album and listen to obscene amounts of that artist for a month or two and then switch my focus. Whatever music I’m listening to at the time always influences the music I write. My music tastes change a lot but in high school it was people like Coldplay, Arcade Fire, and Damien Rice. Right now I’ve had a lot of The Neighbourhood and K.D. Lang (kind of a weird combination I know) on my playlist but next week it could be something completely different.

You have recently been signed to Vancouver based record label, 604 Records, how does it feel to be part of a record label that is full of so many amazing Canadian talents?

We feel so lucky. The best part about being on 604 is the other artists. There is such a tight-knit community of people, everyone supports each other and collaborates.  Some of the coolest people we’ve ever met have come out of our association with 604.

You will be releasing your debut full-length album, “To Bring You My Heart” later this year; can you explain to us your writing process?

Usually I’ll sit down at the piano or pick up my guitar and just start writing and see what happens. I almost always write lyrics and melody at the same time. Sometimes I’ll be in bed or in the shower and a lyric or a melody hook will just float into my head and I’ll record it immediately on my iPhone. Those are usually the best and fastest ones to write, the ones that come out of some weird in-the-moment inspiration. I also really enjoy the music that comes when I am co-writing with someone. You can really tap into someone else’s energy and that chemistry, you always end up putting together work that is different than things you create on your own.

You have worked with many talented musicians on your upcoming album, such as Kevvy Mental (Fake Shark Real Zombie), Tavish Crowe (Carly Rae Jepsen) and Steve Bays (Hot Hot Heat), who else would you love to have the chance to work with in the future?

I keep a list of dream producers in my phone. Ryan Tedder is a big one. I love OneRepublic and he’s been behind some of my favourite hit songs to come out of the pop world in the last decade. Linda Perry and Sia are both amazing powerful women in the industry so they’re definitely on that list too. Of the people who are doing well right now it would be a dream to love to collaborate with Hozier or Kendrick Lamar. It would be cool to push my limits and work with someone who does a different thing than we do.

Your debut single, “Cherry Lips” was released to iTunes on May 26, what can you tell us about the song?

I recorded “Cherry Lips” in Toronto last year with Tino Zolfo and Hawksley Workman. It’s a song about one of the girl’s relationships. She was with this guy and they really loved each other and connected, but there was a huge part of him that needed to be free, rebel, and have other experiences. They were good together, but that part of him just wasn’t conducive to a relationship. “Cherry Lips” is about having to reconcile with that.

You premiered the official music video for Cherry Lips on May 22 when you hit the stage for the first time as a trio at the Biltmore in Vancouver, what was the highlight of the video shoot?

The video shoot was crazy. The whole first night we filmed all of the three-girl stuff downtown. We ended up filming incredibly late at night, and having a camera crew in downtown Vancouver attracted some interesting/crazy people. One of my favourite moments was when Clayton Dupuis (the male lead) and I were filming the scene in the bathtub and I had to answer the door for the pizza delivery guy when I was soaking wet with a camera crew behind me. I think he thought I was absolutely insane and the look on his face the whole time was priceless.

Our lives shows are the place where you’re going to get to know who we are. Each of our individual personalities, as well as the relationship between the three of us really comes out on stage. I also like to introduce songs and talk a bit about what they’re about or the stories behind them. Apart from all of that stuff there is usually a lot of sweaty dancing, so if nothing else come for that!

Do you have any plans for any tour dates to be announced this summer?

We’re really hoping we can do some sort of radio tour this summer and we’re planning on booking some all ages shows as soon as possible.

Will you performing at any festivals over the summer months?

We would love to. We are all big fans of summer music festivals.

Because of my parents, I listened to a lot of Alanis Morissette, Joni Mitchell, Barenaked Ladies, Neil Young, Leonard Cohen and The Tragically Hip growing up. Right now I love Tegan and Sara, First Aid Kit, Patrick Watson, Feist and K.D. Lang. I also listen to a lot of music by local artists and friends. Canadian music is awesome.

My family has been going to the Vancouver Folk Festival ever since Lauren and I were babies so my first memoires of a concert are from that festival. We used to go to all the different stages and dance. I think my first big arena concert was Hilary Duff, then Avril Lavigne. I thought those arena shows were the most amazing thing I’d ever seen.

If you were asked to sing a cover song on the spot, which song would immediately come to your mind?

If I was on the piano I’d play “Come Home” by OneRepublic and if I had a guitar close by I’d play “I Kissed a Girl”. As a band, Lauren and Kaitlyn do a super good mash-up of Britney’s “Toxic” and “Wicked Game” by Chris Isaak.

None of us have tattoos! I don’t know if I’m brave enough to make that big of a commitment to a piece of art because my tastes are constantly evolving.

If you were to put together a festival lineup, who would you want performing with you?

I think my dream line up would be Fleetwood Mac, Lana del Rey, Lorde, Coldplay, The Neighbourhood, ABBA, Of Monsters and Men, Arctic Monkeys, Alt-J, The Killers, Edward Sharpe & the Magnetic Zeros, Eminem, Jamie Cullum, My Chemical Romance, HAIM, and I’d probably have to top if off with Taylor Swift. I got way too excited thinking about that.

All three of us love the water. I always used to pretend I was a mermaid as a kid so probably something water related. I like swimming in lakes and the ocean a lot. I’ll just go out as far as I can and swim around, it’s so peaceful.

You guys make our day. We’re super grateful to all of the people who come to our shows and send us sweet messages. So I guess just thank you so much, we adore you.