By Remington Fioraso on May 28, 2015@https://twitter.com/RemingtonFD 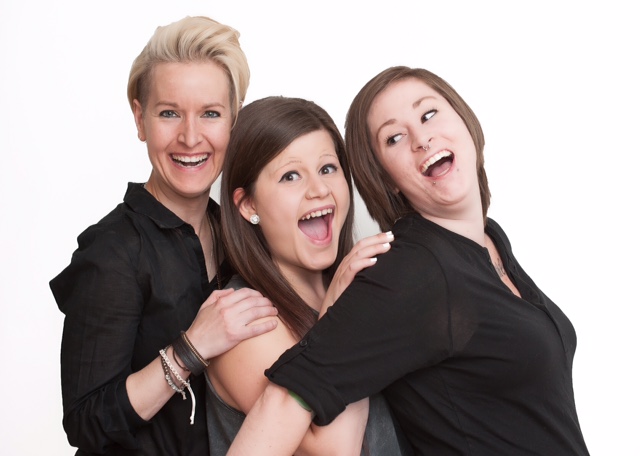 Fancy As Fawk is a pop trio from the nation’s capital. The band is formed of Jenna Taggart, Laurie Stewart, and Sammy-Jo Elderbroom.  Fancy As Fawk released their debut single entitled “Lungs” via iTunes and Youtube on May 5, 2015.

Laurie: I love bands who write and perform good music. Currently I am heavily influenced by the guitar arrangements in The 1975, the catchy pop melodies and fun lyrics of bands like Sheppard and Metric. I am also influenced by female fronted bands who really bring it on their records and their live shows. Bands like Haim and Walk Off The Earth definitely bring give us food for thought and inspire some of our style.

Sammy-Jo: Honestly my biggest musical influence is my Dad. Growing up surrounded by music in my family and playing together was amazing! I also have to give a lot of credit to Mike Bond who taught me guitar and drums for many years. Having people in my life who are passionate about music helps fuel my passion.

Laurie: Jenna and I met in 2005 at the Ottawa Ex where we were both performing in separate acts. I never in a million years thought that we’d cross paths again and form a band of our own. I met SJ at her place of work in Barrhaven where I stalked her for the latter part of year to come and join my band at the time as we were looking for a guitarist. She was already playing in another band and working three jobs so it never materialized until this past year when she finally said yes!

Sammy-Jo:  I met Jenna a long time ago through the music school (Hummingbird Music) we both attended for Jam Clinic. I met Laurie when she was trying to get me to join one of her older bands and would come into Metro (where I worked at the time) to buy random things and go through my cash just to give me business cards and convince me to join.

Jenna: Laurie and I met years ago when we we’re both performing at the Ottawa SuperEx. Sammy Jo and I have been good friends for years.

What or whom are your inspirations when writing?

Laurie: I’ve always been inspired by music that moves me, literally and figuratively. When I was younger, I listened to Wilson Phillips, Cyndi Lauper, Oasis, Bjork, and the Cranberries.  When I started writing songs in my mid-teens on my sister’s guitar, bands like Garbage and Joydrop and Alanis Morrisette where always playing in our house. So my influences are pretty much all of those mashed together. Though many of those bands were alternative and dark lyrically, I still always wrote pop music with catchy melodies and meaningful lyrics, at least to me. Today, I listen to bands like Sheppard, The 1975, and Metric. I really like big choruses and experimentation with synth and guitar sounds, so Fancy As Fawk’s sound also has elements of those styles as well.

How would you describe your sound to those who have yet to hear your music?

Laurie: Our sound is definitely a mix of pop-rock-indie. We write catchy songs with big choruses and generally on the subject matter of things we know to be true for ourselves and the people we are closest to. Our songs are upbeat and generally fun to listen to. We’ve been called a mix of Wilson Phillips meets Kelly Clarkson meets The Fray or The Script. (Also bands that write catchy songs with meaningful lyrics).

Sammy-Jo: Pop music with a twist. We just like to have fun and it comes through in our music.

What was your favourite moment when creating the video for Lungs?

Laurie: One of my favourite moments from the Lungs video shoot had to be when we made a donation drop off to the coordinator of Nelson House in Ottawa. They were somewhat in the dark about what we had planned and they were extremely grateful to receive our donation. They were surprised and very excited and so it felt good to give back to our city.

Sammy-Jo: My favorite moment making the music video is likely the hardest question to answer because there were so many good ones. Laurie getting a can of pop exploding in her face was pretty funny! I also just loved driving around and goofing around in between filming. We had a lot of fun filming the whole thing!

Jenna: Making the whole video was really fun for me but the moment we dropped off the donations is something I will remember forever.

What is next for Fancy As Fawk?

Laurie: We will be finishing up pre-production on our next single and getting ready to play a bunch of gigs here in Ottawa, Montreal, Toronto, London, and St-Catherines. We are also going to be filming a segment for Rogers Daytime 22 on June 3.

Jenna: Getting in the studio to record our second single!

Laurie: I really love Simon Wilcox, not just because we co-write music together sometimes, but because she’s an incredible song writer and musician. She co-wrote Jealous with Nick Jonas and she has had some songs by her project called Cider Sky featured on the Twilight Sound Track.  She has made a career out of her passion for songwriting and is a huge influence on my own career in the field. In addition to Simon, I also really like Lights, Metric, and Daniel Lanois. I grew up listening to Daniel Lanois because my parents had a copy of his record called The Maker, and he’s just had such an incredible career producing for U2 and so many other legendary bands.

Sammy-Jo: Leonard Cohen is for sure one of them! I love his music and his literature! Honourable mentions to Joni Mitchell, Matthew Good, Drake and Deadmau5.

Laurie: Well, I’m a vegetarian and so I eat a lot of salad, but my favourite food right now is the veggie burrito from Burrito Gringo. I can’t get enough. I add just enough hot sauce to the point where my mouth is burning off but I just can’t ever say no. It’s too damn good!

Sammy-Jo: Sushi! All you can eat!

Jenna: I love Italian and Chinese food! Kale chips are also my kryptonite.

Laurie: I don’t have cable because if I did I’d probably never write any songs, BUT I do have Netflix and I am currently binge watching Schitts Creek. It’s so hilarious. Catherine O’Hara makes me laugh so hard I spit out my drink regularly.

Sammy-Jo: This changes often, currently I am watching Game of Thrones which is amazing! Shows that I can always watch and re watch are Friends, Family Guy, American Dad, Will and Grace, Big Bang Theory and Greys Anatomy.

What is the one thing you cannot leave your home without?

Laurie: These days I can’t leave home without a ball-cap. I’m currently in a grow-out phase with my hair and it’s unruly almost all of the time, so I just sweep it under my hat and then I’m good to go!

Sammy-Jo: My keys! Can’t get back in without them!

Laurie: I am a certified scuba diver and I’ve always wanted to dive the Great Barrier Reef, or whatever is left of it. It’s currently dying and being sun bleached. The Australian Government has laws in place to protect it, but people are still polluting it and taking away from it. I really want to get on a live-aboard boat and check it out before it’s too late.

Sammy-Jo: Prague, Ireland and Thailand. All beautiful places with cultures that I want to experience firsthand!

Jenna: California! I’ve wanted to go there since I was a little kid. Would love to check out the music scene and the beautiful weather!

Finally, is there anything else you would like to say to Canadian Beats readers?

Laurie: Thank you so much for supporting Canadian music and smaller bands like ours! We promise to keep the good stuff coming!

Sammy-Jo: We love you! Thank you for your support, it means the world!!

Jenna: Thank you for supporting Canadian Music and sharing your faves!