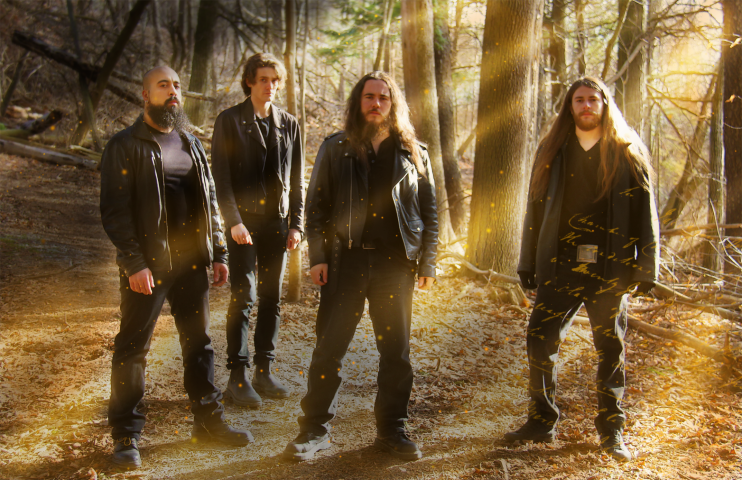 Toronto based Epic Melodic Metal band, Vesperia has announced a string of tour dates across Western Canada this July with some of the dates supported by Winnipeg based melodic death metal band, Laika. The band is also completing a variety of East Coast dates in support of their upcoming EP, “The Iron Tempests'”.

I had a chance to have a chat with the band about their background, the upcoming EP, and the tour. Keep reading to find out a slew of interesting facts about this Canadian metal band.

When did you meet and form Vesperia?

Vesperia came about in 2012 when a few of us put the remains of a previous band to rest. We took elements of the music of that former band and we begun to apply it to the newer style we have now achieved. Over the last couple of years our lineup has changed a little bit, but as of Fall 2014 we now have our current, permanent lineup!

How did you choose the name, Vesperia?

When we were re-imagining the band and style back in 2012 we wanted a new name that would encapture the entity we wanted to become and the scale of what we were aiming for. The name Vesperia, which means ‘Land of the evening star’ came up while we were indulging ourselves with different fantastical ideas of where we wanted to take the band. It suited our tastes at the time, and thankfully the name represents us the best way possible now.

Under “Genre” on facebook, it says “Canadian Epic Melodic Metal”, what made you consider this as your genre of music?

The style we are playing is very much a product of circumstance. We have undergone various changes in our musical direction over the years, having been and played folk metal, death metal, black metal, etc. We still don’t entirely feel that even this description accurately depicts our music, but it is up to the listener to decide. We shall leave it as a subjective case!

You will be releasing your new EP, “The Iron Tempests” later this year, what can you tell us about your writing process?

Well, so far it has been a very laid back process. The last year has been a period of general creative hiatus, so we have had ample time to write all the new music for the next couple of releases. Generally, Frankie (guitars) writes the majority of the song and send it to us. We then adjust and tweak the parts to suit our style and taste. I write all of the lyrics on my travels and within my day to day errands.

Where do you tend to draw inspiration from when writing?

Personally, I draw inspiration from films, listening to all sorts of music, reading, hiking and playing videogames. I have a very wide spectrum of inspiration, so I never try to limit myself, and I feel the other guys operate in the same fashion.

This EP is a follow up from your 2013 full length release, “The Olden Tale”, has your sound changed much over these 2 years?

Yes, absolutely. Our sound has actually evolved dramatically since ‘An Olden Tale’. A lot of the more extreme elements in the music are much more prevalent in the new material whereas the atmosphere is much more epic and fuller. The new songs have a grander scope musically as well as lyrically when being compared to the old material. All of the new music was actually written in the same time frame as one another, so we find the songs all have the same temperament, rather than a range of styles like in previous releases.

You will be heading out on tour in promotion for the EP, including dates in Halifax, Charlottetown & Fredericton, is this your first time playing on the East Coast?

Yes! And we couldn’t be more excited to finally make it out that way. We are planning to make the east coast a regular stop in our upcoming tours.

What can fans expect from a live Vesperia show?

We rehearse as though nothing else exists in our lives, so an incredibly tight live band is what we have become. We try to match our live performance to the lyrical side of the band to elaborate on the ‘storytelling’ element prevalent in our music. There is a huge amount of crowd interaction and we are always trying out new visuals, so our shows are more of an experience than light entertainment.

Xul, Hallows Die, Nordheim, Unleash the Archers, Ancients and waaaay too many more to list!

Here, at Canadian Beats we like to include a small portion of questions that may help your fans learn something new about your, so here goes:

What was the first concert you ever attended, as a fan?

I’d been to many before I was aware that I was a fan and had disposable money to buy concert tickets… so the first I attended as a fan would probably be Iced Earth, Children of Bodom & Evergrey in Toronto. I might be wrong though.

I do! I have two triskeles (circular symmetrical patterns) on either side of my chest. I do plan on getting more!

If you were able to go on tour with any other Canadian band, who would you choose?

Xul and Anciients. Our styles would mix in such an awesome way that each show shown would be a complete musical journey for the audience.

Drinking beer, mead and cider on the patio or BBQing… Or camping. Damn, that’s a hard one.

What is one thing that may surprise your fans to learn about you?

Our guitarist Frankie is a black belt martial artist. So no one better try anything funny!

We love you all and we appreciate every ounce of support. We will be seeing you soon, no matter where you are!