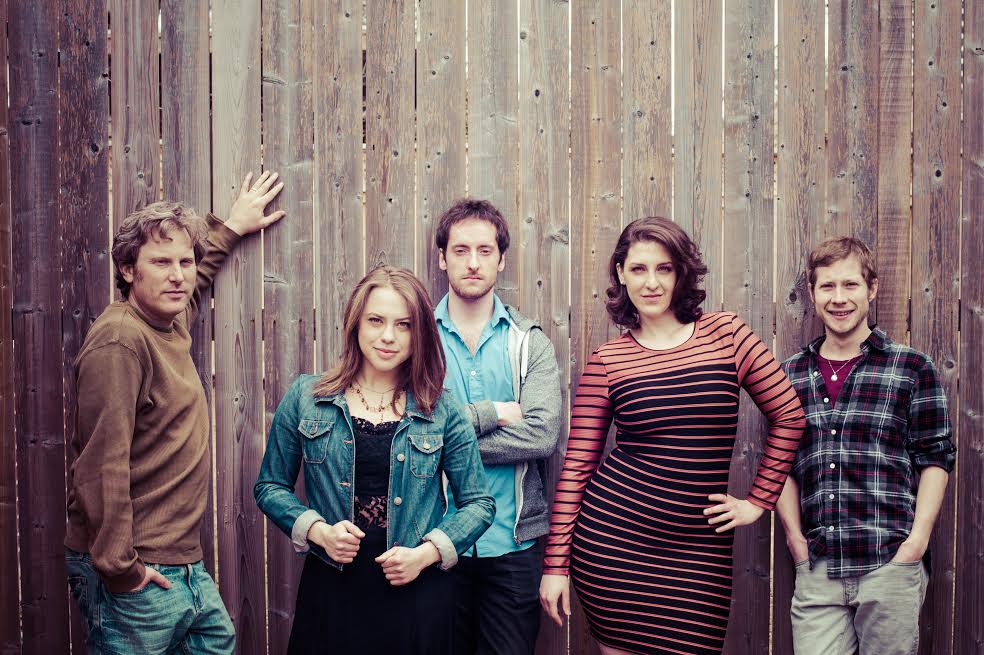 Toronto, ON based Indie Folk band, Crooked House Road has released their self-titled album today (May 26, 2015). If you want to know what we thought of the album, check out our pre-release review HERE!

I had the chance to ask the band a variety of questions about their background, the new album and so much more.

How did you decide to name the band, “Crooked House Road”?

Our original name actually already belonged to a Christian Rock band in the States and several people had gotten us confused, so we knew we had to change it. My boyfriend and I had just spent a breath-taking 4 days on a canoe trip in the remote Algonquin park, and as we were driving home we passed this street sign that pointed down a tiny, dead-end, country road that said “Crooked House Road.” He read it out as we passed it and it just resonated with me. It brought to mind such a clear image and seemed to mirror the music I was writing: rootsy, full of story, raw and imperfect. A week later at rehearsal I proposed the name and it stuck!

If you look at the album art on the CD, all the photos are of an abandoned house in a ghost town in the Namib desert. The lyrics of each song are printed over a different room in this decaying house, so in a way with this album we built a full house, with a story in each room.

Crooked House Road began when I met Mirian Kay at an open mic and we immediately sparked a friendship. She became my musical partner in crime and we began performing my original songs around Toronto along with my old university buddy Tom Mifflin on keys and back up vocals. In a way the Crooked House Road musicians found us: Derek Gray was my upstairs neighbour; Gram Whitty was a substitute musician we brought in for one gig and never let go; and I met Joshua Skye Engel at synagogue playing a show for kids. We went through several incarnations of the band, playing with different musicians: some of which, like Darren Eedens (banjo), make an appearance on the album. But we naturally settled into a groove with our current members. The ones who really worked just kind of stuck.

You recently released your new single, “Mountain”, how has the response been?

The response has been truly amazing. It’s been featured on multiple websites internationally and the feedback has been overwhelmingly positive. We’ve been playing “Mountain” at gigs for a while and it’s always been one of our fan favourites. One thing I love about the response, is I can’t quite pin point a specific demographic for our growing fanbase. I’ve had people write me saying their 2 year old wants to listen to it on repeat and a big percentage of our fans are middle aged and older. I love that I’m writing music that resonates with so many people beyond my generation.

You worked with Current Sessions Productions to release a live video of “Tell Me A Story”, what was that experience like?

It was so much fun. Nicholas Posthumous and his team at Current Sessions are just great people to work with. And I love his concept of capturing bands playing in unconventional locations. It allows us to say something about the music in a visual capacity. I was the biggest bookworm as a kid, so when he proposed filming in Balfour Books it was right up my alley. And with a song like “Tell Me A Story” the fit was too good to be true. It was winter and everyone was freezing from outside, the instruments kept going out of tune and we were under a time limit. But with these guys we just laughed through it and somehow managed to pull it off in no time.

Do you plan to work with Current Sessions again in the future?

I would love to work with them again. We actually shot a second live video with them already for our tune “Racin.” Keep your eyes out for it in a few weeks!

You released the new album on today (May 26), what can you tell us about the writing process behind the album?

The writing process is somewhat unconventional. As a singer/violin player I don’t play an accompanying instrument like piano or guitar that most people use to compose. I write my tunes a ccappella, often starting with the lyrics and then adding a melody, sometimes the other way around. It’s pretty organic. Some songs are written all in one shot in a couple hours and others, like “Red & Gold”, were gestating in my head for months, being written a little bit a time. Once I have a loose structure, Mirian and I meet and we come up with a chord structure and do some more arranging. Then we bring the tune to the band and we workshop it with each musician developing their own parts. But I don’t feel like a song is really complete until it’s been played in front of an audience. That’s the only time you know whether it really works or not.

The album has been produced by Juno winner/ Grammy nominated, Ken Whiteley, is there anyone else you’d love to work with in the future?

I’d love to work with some of the guys from Do Make Say Think. They’re instrumental music blows my mind. It’s the modern day symphony. And I’d love to do a future album that has a bit more of a rock edge mixed in with the folk.

When can fans expect some tour dates?

We have all our upcoming gigs for the next few weeks on our website now and we’re in the process of booking more, focused on Southern Ontario for the summer/fall. A larger Canadian tour is something to look forward to in the future. If you want us to come to your town/city write us!!!

Oh man, there are so many! Recently I’ve been really digging The Highs and local folk singers Georgian Bay. And if I’m in the mood to party I love Lemon Bucket Orkestra. My parents ran a folk dance troupe that I performed with as a kid, so I grew up around traditional Balkan music and dance. Their music feels like home to me.

I have to admit I think it was Christina Aguilera. I was caught up in the pop craze as a kid… I still love a solid pop song. And while we’re being honest: damn that woman can sing!

Dark Day Revue – it’s a revue at the Dakota Tavern hosted by the musicians in ONCE at Mirvish. They use the opportunity play some of their own tunes on their day off. It was a blast watching these amazing talents just jam and have fun. And who doesn’t love 4 fiddles all playing at once?!

If you were able to put together a festival, which other Canadian bands/ artists would you want performing with you?

Let’s say you are able to write a song for any existing television show, which show would you choose?

What is the one thing you can’t leave the house without?

My metropass and … my cell phone.

If you like what we’re doing or want to have us come to your local venue we’d love to hear from you! Write us at crookedhouseroad@gmail.com; find us on facebook or tweet us at @CrookedHouseRd!