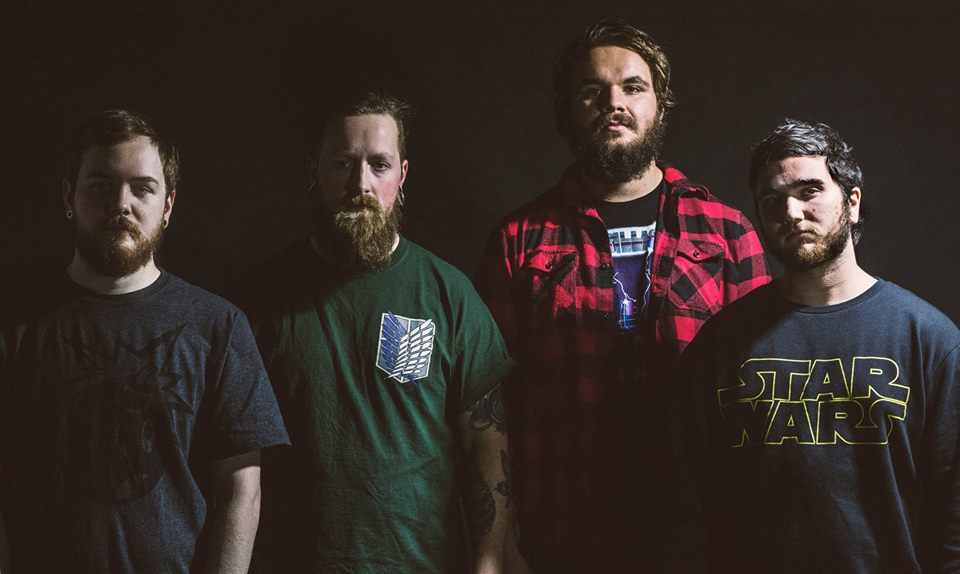 Ontario based Metal/ Hardcore band, Lungless has released their EP, “Inhale” recently, which you can get HERE! We had the chance to ask the band a series of questions about their background, the new EP and lots more, continue reading to find out more about this up & coming Canadian Metal band.

How did you choose the name “Lungless” for your band?

It kind of happened by accident. We were having a hard time coming up with a band name (as most new bands do) and everything we were coming up with was either taken or just very lame. However I (Nick) was texting someone one day and my phone decided to autocorrect a word to “Lungless,” which is weird because the word my sausage fingers was trying to type wasn’t even close to that word. However we decided to roll with it because it was almost a sign and we didn’t have anything else good lined up. With the direction we’ve taken lyrically the name has taken on a whole new meaning for us.

All of use used to play in a band called Constellations. When our singer left we decided to disband and start fresh. We tried out some new vocalists but nothing was really sounding the way we wanted to. After some debating we decided to continue on as a 4-piece with bassist Mike Griffin and myself taking over on vocals. We’re just a really tight nit group and really weird dudes, so finding someone to blend in with us would have been a challenge.

You recently released your debut EP, Inhale, how was the reaction from fans?

Really surprising to say the least. Since this is a whole new band we didn’t know what to expect. However we’ve been hearing really kind things from people all over, so we couldn’t be happier! We’re really proud of this album and knowing people enjoy it is just the icing on the cake.

What made you decide to offer your EP for free on Bandcamp?

It was something we didn’t even think twice about. In today’s world where there is so much music to choose from, it’s almost overwhelming. So if anyone takes the time to check out the music we’ve made, we want people to have it for whatever they think it’s worth. On BandCamp you can download it for free or pay what you want, which believe it or not people are still supporting bands! We’ve received everything from $1 to $50 donations, which is just insane. However the album is also on iTunes, Spotify and Tidal (just so Jay-Z can make a few cents off us).

What is your favourite song on the EP?

That’s difficult, for me the song “Eden” is special for me because it was the first song I wrote for Lungless and it made it onto the album. However, I’d have to say “Glass” is probably my favourite. It’s just got some cool riffs and it’s really fun to play live! We always end with that song and it always gets pretty hectic near the end.

The video for your first single, “Lush” was released on February 13, what was the highlight of shooting the video?

Well it wasn’t an easy video to shoot. We only had one day and limited amount of daylight to work with since it was winter. It was also bitter cold outside. However the location we shot the video at was such a cool place. It was a prisoner of war camp back during World War II and has since been turned into a free-range paintball field. There were so many buildings to explore and so many cool props, like a broken down helicopter. Sadly we didn’t have much time to explore since we had lots of work to do.

You have a collection of shows coming up in Ontario, any idea when fans outside of Ontario will have a chance to attend a show?

Hopefully sooner then later, we’re working on trying to get out to Quebec this summer. The rest of Canada however, we want to do that as soon as humanly possible. We’ve always wanted to tour out east and hit the west as well. We just finished building bunks in our van so our van is now perfectly tour ready. So hopefully we’ll see more parts of Canada soon!

If you were able to head off on a tour with any other Canadian band/ artist, who would you choose? Why?

On an unrealistic level, doing a tour with Nickelback would be sick (judge all you want). However we’d love to shows with Cardinals Pride or Kennedy, both from Quebec. If you haven’t heard of either of them, do yourself a favour and go check them out!

If you were asked to cover a song, which would you choose?

We’ve been trying to pick a song to cover for quite a while but none of us can agree on anything. The best idea we’ve had so far is “Caramelldansen” so I guess that…(If you don’t know what that is Google it).

I don’t know how surprised you may be but we’re actually really weird dudes. I don’t mean creepy weird or anything but just very quirky and nerdy. However that’s most heavy bands.

Nick – I recently saw The Used and Every Time I Die, which was an amazing show. ETID is one of my all time favourite bands and The Used is just phenomenal live! I hadn’t seen them since they opened a really awkward set for Three Days Grace in 2009, so I was happy to finally see them headline their own show.

What is your favourite spring time activity?

Nick – This is almost more of a summer thing but we normally start doing this in the spring, I’m a big fan of beach bonfires. Just really relaxing.

If you call yourself a fan of ours, we’re truly flattered and thank you very much for taking the time to listen to the music we’ve made. If you live anywhere near an upcoming show we’re playing, please come out! We’d love to meet you and chat about whatever you want.