By Remington Fioraso on May 22, 2015@https://twitter.com/RemingtonFD 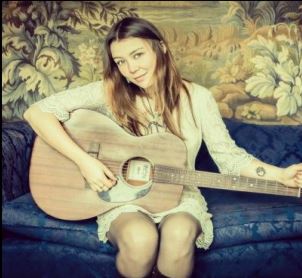 Hailing from Toronto, Annie Sumi is an alternative-folk artist based in North Bay, Ontario.  She released her debut album entitled “Reflections” on April 11, 2015 via Bandcamp.  I had the opportunity to conduct an email interview with Annie so continue reading to find out more about the singer..

At a young age I was exposed to the music of Regina Spektor, Feist, Ingrid Michaelson, the Shins, and a handful of other incredible indie-folk/rock bands, but it wasn’t until stumbling across the lyrical stylings of Joni Mitchell, Bob Dylan, and that uprising folk scene that I really began to understand the political and emotional potential of music.

I have always loved to sing, but as a young girl there was a lot of external pressures around me to become something I had not yet envisioned of myself. In my first year of University, I stumbled into a national contest called Open for Lights, and had the opportunity to bring the Canadian artist Lights to my University and perform as her opening act. I think that was the moment that I realized that music was who I am, and not something I did for other people – it has been a piece of cake since then!

What are your main inspirations when writing?

I take a lot of inspiration from emotional experiences and landscape, but, lately, I have been trying my hand at writing universal songs that encapsulate the present era.

How was the recording experience for Reflection?

Reflections was my first full-length recording experience, and I cannot express how grateful I am for being able to share that experience with the music community in North Bay! My producer, and amigo, Ben Leggett has been such an inspiration and guide throughout this process. When I look at the roster of musicians on Reflections, I am thankful to have been surrounded by such incredible talent and support throughout the entire recording process.

How has the reception been so far for the album?

Man… CRAZY! After releasing the album, I have been overwhelmed by the positive feedback. People that I have known all my life and people I have never even met have been pushing the album. I am currently touring around Ontario, and I cannot believe the positivity coming from new friends and fans from the places I’ve visited so far – I am a lucky girl.

Were there any songs that you were most excited for fans to hear?

The Waltz is my favourite track on the album – probably because it is the newest, but it also captures a style that I foresee my music developing into.

What can fans expect next for you?

Well, I am touring all across Eastern Canada this summer and hitting a few incredible festivals along the way, but, otherwise, the writing is still flowing, and I am hoping the next album is a total knockout!

In typical Canadian Beats fashion, here are some questions to help fans get to know you a bit more.

I really like the old folkin’ classics like Joni Mitchell, Neil Young, the Band, but I have been recently introduced to some killer new musicians like Jenn Grant and Colleen Brown.

The first album I ever purchased was the Dixie Chicks album Home. I sang practically every song on the album, and still throw a few of their tunes into my campfire sets!

Who was the first artist you saw perform?

Wow, it is super hard to say because of how many shows I have been to in this little lifetime – but I think it was Norah Jones at Massey Hall, Toronto. It was this absolutely killer show, and ever since I have been dreaming about playing on that stage. Small steps forward, but a girl can only dream.

How does it feel to be done school?

To be honest, finishing school is bittersweet. I met my best friends up at school, and leaving is always hard for me to do. But my friends and community up in North Bay are so supportive of what I’m doing, and they are happy to see me go off trying to catch the stars. It has been a graceful transition from the intense juggling act of being a student, a part-time worker, and a musician into the equally intense (but exponentially more fulfilling) lifestyle of a touring musician. I am so grateful for the inspirations, influences, and encounters I have been exposed to through my education, but the times are a-changing.

Thank you. There is always thanks in my little heart – thanks to my family, friends, community, to the kindness of strangers and the nameless inspirations that pass with the grace of thoughts onto paper. Thank you for all that you do, and all that you don’t even know that you do. I love you.