By Lindsay Newman on May 20, 2015@https://twitter.com/lindsaynewman_ 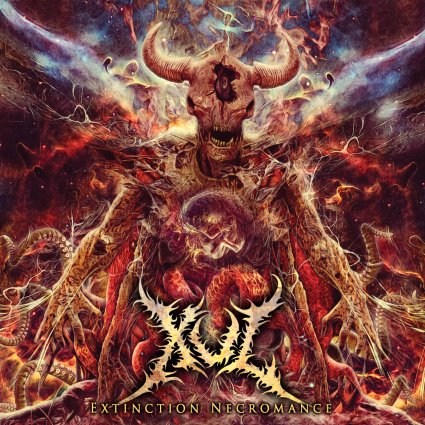 Vernon, BC metal band are about to release their EP “Extinction Necromance”.  Some influences the band has are bands such as, Behemoth, Dissection and Immortal.  XUL are Levi Meyers (vocals), Bill Ferguson (guitar), Marlow Deiter (bass), Wallace Huffman (guitar) and Lowell Winters (Drums).

This EP is something that metal fans would enjoy and even if you’re not a metal fan you will enjoy some of the musical aspects of the EP.  If you’re not a huge metal fan I wouldn’t turn down their sound just yet they added some different musical elements that I really enjoyed and then went into a heavy metal sound.

The beginning of the second track on the EP “Orbit Of Nemesis” had a different instrumental element to the beginning; which made me wonder what the track was going to be late.

I suggest to heavy metal fans out there to check out this EP and to give the band a chance because they have a lot of potential to be something big in the metal scene.