By Remington Fioraso on May 18, 2015@https://twitter.com/RemingtonFD 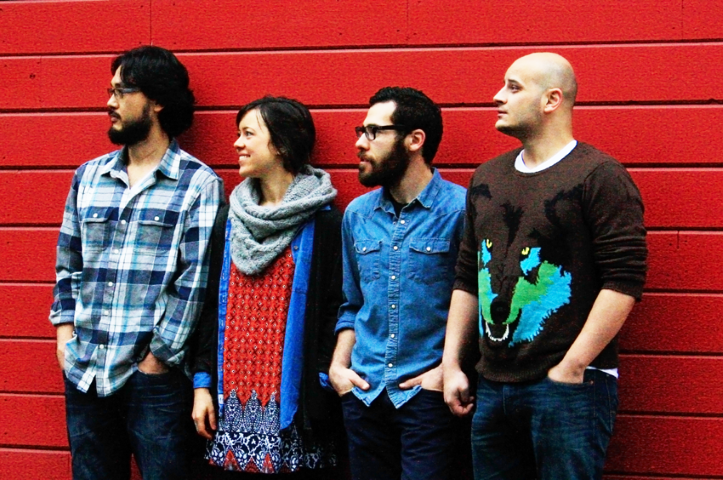 Echo Nebraska is an economical folk-rock band from Vancouver, BC.  The band is formed by Devan Christodoulou, Karen Hefford, Kathy, Kwon, Mike Lauder, Gunn Park, and Andy Schichter.  They released their EP, Send the Ships, on January 26, 2015 featuring the lead single “Hey, Allison.”

Andy: Tons when we were figuring out a sound for the band. Every song we demoed, we would pull ideas from certain artists. ‘Hey, Allison’ was inspired by Fleet Foxes. ‘Chain of Command’ isn’t on the EP but we’ve played it live, has a Paul McCartney ‘Monkberry Moon Delight’ feel to it. Personally, The Beatles are by far my biggest influence, but we can super specific about each song and where ideas came from. We called a song Grizzly Bear for the longest time, because we wanted to emulate them for a song.

Devan: I grew up listening to classic rock artists like The Beatles, Neil Young, Bob Dylan, and a lot of the Laurel Canyon era. They will always be a massive influence to me. But I also draw inspiration from modern bands such as Grizzly Bear, Fleet Foxes, Sufjan Stevens and Radiohead. I could probably make a giant list for you. There’s lots.

Andy: I met Devan and Gunn a couple of weeks after moving to Vancouver. I was working on a record for their other band, Amber Hills. Devan had a bunch of tunes that didn’t fit that style, so we got together to jam and demo out these songs. Gunn was always going to be the bassist in the project. The rest of the members fell in line this past winter/spring. Karen responded to a Craigslist ad. She knew Kathy from School. Mike is someone who I met by recording various bands he’s in.

What inspired you to name the group, ‘Echo Nebraska?’

Andy: We struggled with coming up with a name for the longest time. We were close to the mixing stage when we finally settled on ‘Echo Nebraska’. Devan wanted something with ‘Echo’ in the title, and I had just watched the Alexander Payne movie, Nebraska, and loved the idea of naming a band after a city or state. We were watching a show at The Railway Club (oddly enough, the place where we played our first gig), and decided to combine Echo and Nebraska.

How was the recording experience for ‘Send the Ships?’

Andy: It was a ton of fun, but kind of odd, since we weren’t really a band at the time. We had never played a show, or even announced that we were a band. The intention was always form a proper group, but we wanted to have recorded music first. It all went smoothly since we had very detailed demos prepared in advance. We just needed a better spot to record than my living room.

Devan: It was brilliant. This was the first time that I was able to demo a song before recording. Having that kind of creative freedom is fun, but dangerous at the same time. There’s something to be said about making decisions fast and trusting your instincts. Demoing a song gives you the ability experiment. I suppose you can over think it. Having said that, I think we are going to continue recording this way. It’s just too much fun!

Do you have any memories standing out recording the album?

Andy: We were tracking the lead vocals for ‘Hey, Allison’, and Devan completely destroyed his voice by the end of it. He texted me the next day, saying that his boss had to send him home. He lost his voice and couldn’t speak to clients. You can even hear his voice break in the last chorus.

Devan: Yeah, I remember that. That was so painful. If I had a vocal coach I’m sure they would be very angry at how I chose to sing that. The most memorable experience for me was singing all of the harmonies. I had the harmonies in my head, so it was really nice to finally hear them come to life.

How would you describe your live shows for someone who has yet to see you play?

Andy: I think the songs are digestible enough that there’s a sense of familiarity. When someone watches us, the hope is they can start singing along by the 2nd chorus. There’s also variety in instrumentation. We have three members that play multiple instruments on stage. The set doesn’t risk getting dull.

Devan: I know that our goal is to get people to sing along or dance. At the very least, we’d like people to leave happy and with a song or two stuck in their head.

What has been your favourite song on the EP to play?

Andy: Pilgrim. It’s the last song on our EP, but we’ve experimented opening our shows with it, and it makes for a nice introduction for those who haven’t seen us before. I drench my guitar in trippy effects, so that’s always fun. ‘Hey, Allison’ is also rad because people seem to get a kick out of it.

Devan: Pilgrim for me as well. I like singing Nice Philosophy the most.

What is next for Echo Nebraska?

Andy: Well, we have several shows across BC this summer, which we’ll be announcing shortly. That’s something that’s important for us, being a new band. Just playing a variety of gigs outside of our hometown. We’ll also start demoing new songs for a follow-up to Send the Ships.

Devan: Yeah, we’re going to play a lot of shows around BC. It’s funny, because I have another band Amber Hills that’s been around for about 5 years. Sometimes I forget that Echo Nebraska is a baby. We have a lot of work to do. I’m very excited to start working on new songs. A lots been written and it’ll be interesting to see how we demo as a 6-piece band now.

Andy: My first show was at The Lyric in Kitchener, ON. It was Treble Charger, Eve6 and Gob. My older brother took me. I must have 13 or so. That show got me interested in production, because I was really into Eve6 at the time, and they were atrocious live. It made me notice the wonders you can create in a studio.

Devan: My parents took me to see The Rankin family when I was a kid. I walked on stage and gave Cookie Rankin some flowers and they invited my family backstage. It was a great experience. Years later, I went to Summersault with Smashing Pumpkins, Foo Fighters, A Perfect Circle, Our Lady Peace and The Deftones. That show blew me away.

Andy: The earliest memory I have of going to a record store was picking up Blur’s self-titled album. That might not have been the first one, but I have a vivid memory of going to an HMV and buying that record.

Devan: Tough to recall the very first one. But, I remember getting Jagged Little Pill by Alanis Morissette. I also purchased a lot of Hip hop records in grade middle school.

What is your ‘go-to’ karaoke song?

Andy: Oh man, I wouldn’t subject anyone to hearing me sing… even if alcohol is involved.

Andy: My all-time favourite show is Curb Your Enthusiasm. I can watch re-runs of that and The Office forever. Currently, I always catch the Daily Show and Last Week Tonight. I also love The Walking Dead and Louie.

If you could travel anywhere, where would it be and why?

Andy: I’d love to visit Thailand and Iceland. Iceland looks like the most beautiful place on Earth. Thailand, well, because I love Thai food and would absolutely travel all the way there for a good meal.

Devan: I have family in Cyprus and Ireland, and I’ve been to Ireland before. I’d like to see the other side of my heritage. I have family there that probably doesn’t even know I exist. It might be the only place I can find other Christodoulou’s.

Devan: If you like our music, please share it! Download it for free. And thank you so very much for reading this and caring about us. We love you!

Andy: It’s true about the free thing. I uploaded it to the Pirate Bay.