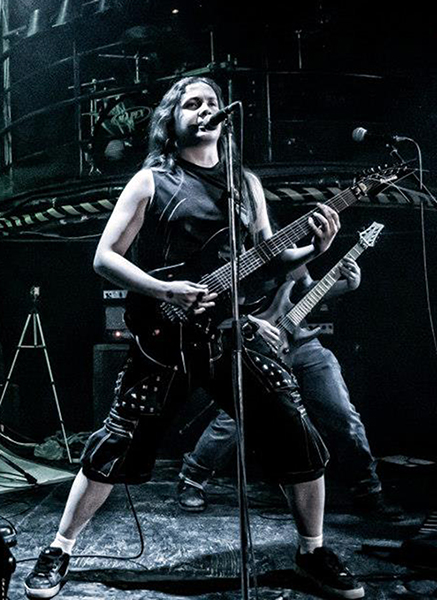 Montreal based metal band, Elderoth has recently released their album, “Mystic” on April 28th, which is a follow up to their 2012 self-titled debut. I had the chance to ask founding member, Collin McGee a few questions about the bands background, the album and more!

How did you choose the name, Elderoth?

I wanted to have a band name of a word that didn’t exist. I did this because I liked the idea of being unique and original.

I moved to Montreal, where I find that it has one of the biggest music scenes of Canada. So from there, I went forward to meet musicians to make a lineup for the band. I met most of the musicians at shows in the area.

You are based in Montreal, which is known to be the most active Metal scene in Canada, do you think that being in Montreal has helped you make your way as a metal band?

Yes, it really has. This is why I moved here. I think it would have been much more difficult if I hadn’t moved here.

You recently released your sophomore release, “Mystic”, how has the response been?

Overall, it seems really great! Lots of great reviews and the fans seem to really enjoy it! I am really grateful.

How would you say your sound has changed between your two releases?

It has changed a lot. The first album was more of a symphonic power metal kind of thing, but then after that I felt that I needed to sound more and more original. The second album was originally written more similar to the first album but then something clicked in my mind, and I decided to modify all the songs to have more outside influences.

Can you explain to me your writing process?

I write everything on a score on my computer. Nowadays, I usually write the chord progressions and melodies first on the score with a piano playing them. I also focus on vocal melodies first as well. So I modify what I write to suit my vocal range and then I add more from there. Surprisingly, bass and guitar are the two things I tend to write last.

Where do you pull inspiration from?

I get my inspiration from video games and soundtracks. Surprisingly, I don’t look to  much metal to get inspiration.

If someone hasn’t heard your music, which song would you recommend they listen to first?

This Shadow By My Side

When can fans expect tour dates from you?

Possibly this summer, but we shall see.

Canadian Beats is all about Canadian music, so who are your favourite Canadian bands and artists?

We always like to include a small portion of questions that may help fans get to know something new about you, so here goes:

What is your guilty pleasure song?

No, I don’t have any, but if I did, they would probably have something to do with Mega Man or Teenage Mutant Ninja Turtles, haha

If you could put together a festival show, which other Canadian bands would you want to play along with you?

At Dawn’s Edge, Karkaos, Unleash The Archers, Aeon’s Fall, and Shape The Above

Do you prefer digital or hard copies?

Last but not least,  is there anything you’d like to say to your fans?

I would like to thank all of our fans for supporting us through everything. A very big thank you.