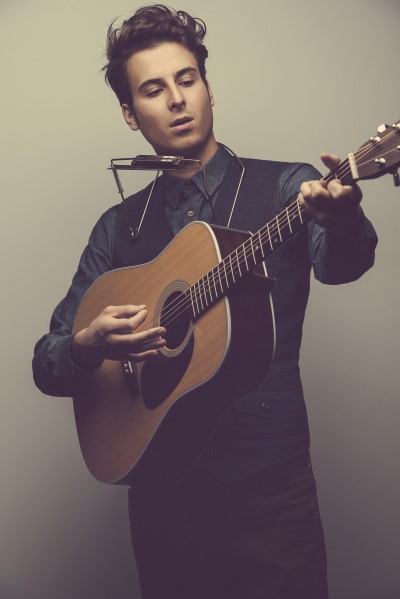 Quebec based platinum singer/ songwriter, Bobby Bazini is signed to Universal Music Canada, and released his debut album, “Where I Belong” on May 27, 2014. This incredibly talented Canadian artist took time out of his busy schedule to answer a few questions that I had, so keep reading to find out more about Bobby Bazini!

At 18, I was hired to perform at a local festival in Mont-Laurier, my hometown. Every morning I’d walk downtown, plugged in my guitar, and played all day long to entertain tourists. This was probably my first gig. I made a lot of new friends that week. Hugo Sabourin, who was the musical director of CFLO, the local radio station, saw me perform there and we became friends and started working together. He helped me find a management team in Montréal, and he made me realized I had a voice. That’s when everything started for me.

Who has been your main musical influence through your life?

I have many, but Johnny Cash is the one who made me want to start playing guitar and sing. He really inspired me. When I was 12, my parents divorced, and I didn’t want to choose between which of my parents I would live with, so I went to live with my grandmother instead. Her favourite singer was Johnny Cash, and his music was often playing in the house. Music suddenly became very important at that point in my life.

You released your sophomore album, ‘’Where I Belong’’ in May of 2014, how has the response been?

Great! It was certified platinum recently, and it was last years best selling album by a Canadian artist. I am very honoured!

What song on the album has the most meaning to you? Why?

I recently saw you perform your song, “Bubblegum (I Can’t Stop This Feeling)” live on the Junos 2015, what can you tell us about that song?

It’s funny ‘cause when I wrote it, I didn’t want to put it on the album. I was planning to give it to another artist, but everyone in my team said I should I record it, and I’m glad I did. It’s such a fun song to play, and it seems to be everyone’s favourite on the album.

Great! I was so happy to be performing at the Junos. It was very important for me to be there. I was a bit nervous but I think it went well and it was a lot of fun.

Speaking of this song, you released a video for the single in August of 2014, what was the highlight of filming the video?

Lots of pretty girls! We hired professional dancers for the music video, and they came up with this great choreography, it was very impressive to see it Live.

You are heading out on a western Canadian tour, when can your east coast fans expect a tour?

There are still a lot of places I’ve yet to go, I’m very excited for what’s next, we’ll be announcing more dates in the next few weeks. Stay tuned!

Which stop on the tour are you most excited for?

I’ve been very productive lately. I have a couple of new songs I’m excited to put out, but it still early in the process so it won’t be before next year for sure as we are still touring for ‘Where I Belong’ and the album is still going strong, which gives me more time to write more songs!

Here at Canadian Beats, we like to ask a series of “fun” questions that may help your fans learn something new about yourself, here goes:

Who is your current favourite Canadian band and/or artist?

Bahamas. I really liked his new album ‘Bahamas is Afie’. He’s got a great sound. Everyone should check him out!

I think it was LA Woman by The Doors. At the time, my friend Hugo introduced me to them, and I bought all their albums right away.

If you were able to tour with any other Canadian artist or band, which would you choose?

Neil Young! Not likely to happen but who knows? It would be great!

I don’t watch a lot of music video, but my all-time favourite is definitely ‘Hurt’ by Johnny Cash. It’s very powerful and moving.

If you were only allowed to listen to one album for the rest of your life, which would you choose?

“What’s Going On’’ by Marvin Gaye. Probably my all-time favourite album, and also still one of the best Soul album ever made.

I love you all!