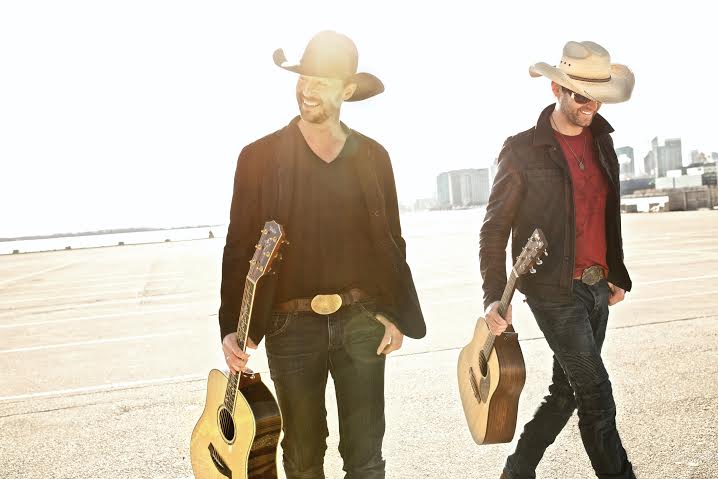 If you consider yourself a country music fan, there is no doubt that you are a fan of Dean Brody & Paul Brandt, two of the biggest Country stars that Canada has to offer. You may have also heard that two of them are teaming up and heading out on a Cross-Canada tour, known as the Road Trip Tour, which will kick off in Victoria BC on September 24, and wrap up in Halifax NS on October 24. For ticket information, please head HERE!

Dean has released his fifth studio album, “Gypsy Road” on April 21, do you can see our review HERE! Paul released his latest single, “Nothing” in March which recently hit #30 on the Canadian Artists chart, and now the two are packing up and hitting the road, with many excited fans anxiously awaiting these dates.

I had the chance to ask these two amazingly talented artists a bit about their career, the tour and more! So sit back, relax and enjoy this special 2-in-1 interview!

How did you know you wanted to pursue music as a career path?

Paul: Early on, I noticed people noticing my singing and writing, and I loved that process, the communication through music.  When the opportunity came through a record deal offer, I had to take the risk, and give it a try.

Who have been your biggest influences throughout your life?

Dean: For me musically – Dwight Yoakam.

Paul:  I’m also a huge Dwight Yoakam fan. I love the tradition and storytelling in his music.  My upbringing in Gospel music was also formative for me.

Up until now, what has been the biggest highlight of your career?

Dean: The Album of the Year nod at the Juno’s. It was special because it was something I shared with my producer Matt Rovey who has been there from the beginning.

Paul: Hard to pick just one for me, there have been so many fun times.  While I love performing, I think I’m a songwriter at heart.  I was asked to write a song for a music project which promoted the major motion picture “We Were Soldiers” by Mel Gibson.  I wrote a song called “For You” with a great collaborator and friend of mine named Steve Rosen.  We turned the song in at the deadline, and not only were we were selected for the project, our song was recorded by Dave Matthews, and Johnny Cash. My grandmother was still alive when that happened, and she was a great encouragement and supporter of mine.  She used to mail order Johnny Cash music to the house so she could learn to play the guitar when she was younger, and was a huge fan of his. When she found out Johnny Cash had sung something I’d had a hand in writing… let’s just say that took her excitement with my career to a whole new level.

You have won multiple awards, how does it feel to know that Canada loves your music?

Dean: It’s an amazing feeling to be onstage and hear a sea of fans singing a song back to you that you wrote off in a corner somewhere. That’s something that will never get old.

Paul: It’s always great to get a pat on the back for doing something people respect, but the awards aren’t why I do it.  It’s for those moments when people sing along, wipe away a tear, or write you online to tell you what the songs have meant to them over the years.  That connection with people through music is what keeps me coming back.

You are heading out on the #RoadTripTour in September, if you had to choose ONE word to describe what we can expect from the tour, what word would you choose?

Dean: Rollercoaster. Well, actually that may be 2 words…

Paul: Brodybrandtastic.  Wait, is that even a word??

Which stop are you most looking forward to on the tour?

Dean: For me it will probably be Halifax. Nova Scotia is home for me now and Halifax will also be the last show, which means I’ll see my wife and kids again!

Paul: It’s pretty tough to beat a hometown crowd… it’s going to be fun to rock the Saddledome in Calgary.

During shows, do you strictly perform your original songs, or do you throw in some cover songs? If yes, what is your go-to cover song?

Dean: Lately I’ve been going to Sloop John B by The Beach Boys. I wore the Beach Boys out when I was a kid.

Paul: We’ve done everything from “Summer of ’69” to “Don’t Get Around Much Anymore” to Capital Cities “I Could Life You Up”.  It’s fun to throw in something with our own twist on it and turn people’s heads with something unexpected.

You have four amazing female acts joining you on tour, Lindi Ortega, Jess Moskaluke, Madeline Merlo & Whitney Rose, so let’s talk about them — what’s your favourite song by these girls?

Dean: “High” – by Lindi, “Cheap wine and Cigarettes” – by Jess, “Sinking Like a Stone” – by Madeline, “East Coast Woman Blues” – by Whitney

Paul:  I was introduced to Lindi through her appearance on Dean’s “Bounty”.  “Tin Star”- Lindi, “Cheap Wine & Cigarettes” – Jess, “Sinking Like a Stone” – by Madeline,  “Heartbreaker of the Year” – by Whitney

If you had the chance to add one more Canadian artist to the lineup, who would you choose?

Paul: High Valley.  Those guys are great.  They are also pretty busy these days…

If you could give any up & coming country artist some advice, what would you say?

Dean: Discover how to write your own songs. It empowers you as an artist, makes you more valuable to a potential label AND – I think your fans will appreciate that the music is coming from you.

Paul:  Write down all the things you are about. Now pick one. Let that one thing drive you. Choose wisely. Also… be teachable, but don’t let others dictate what you are doing with your message and art.

What’s next for you after this tour?

Dean: A vacation! … then back to the studio to write for the next record

Paul: We have plans for some new television projects, music, and a few other tricks up our sleeve.  It never really stops for me… like my 6 year old son Joseph says… “Dad, it’s time to get up… there’s no rest for the weird!”

Dean: I get do what I love for a living because of you and I’m very grateful. We’ve made a lot of special memories.

Paul: Thank you for letting me do what I do. We’ve had a blast, and at the same time worked together to make a huge difference together on different projects around the world as well.  You’ve been there supporting and encouraging me for the last 20 years.  Here’s to 20 more!