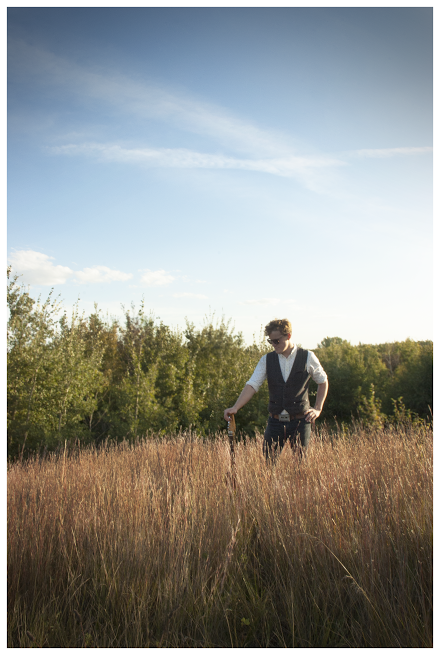 Eric Taylor is one of Saskatoon’s up & coming artists, and we’ve had the chance to ask him a series of questions to help you all get to know him a bit better. Eric was a former Music Business Student from the Nimbus School of Recording Arts in Vancouver, and has recently teamed up with Great Canadian Entertainment. Since teaming up, they have been preparing for the release of Eric’s first project, “Dreams in Colour” which is set for release this fall. Don’t want to wait that long? You’re in luck, he has released his debut single, “Caught Me” today (May 4, 2015). If you like what you hear with this single, you’ll be excited to hear that Eric, along with Great Canadian Entertainment have planned an extensive release strategy, which includes one single released per month during May through August, each accompanied by a video!

Now, let’s get on with the interview, so you can all learn more about this talented Canadian artist that I am sure will become one of your favourites before long.

You were 11 years old when you started playing guitar and writing songs, did you know that early that you wanted to pursue music as a career path?

When I was that young, I always dreamed of playing music for the rest of my life. Music was on my mind all the time, everyday.  When you are that young I don’t think you necessarily think about how you are going to make it a career, you just are so immersed in it you just believe it will happen somehow.

Who have your main musical influences been throughout the years?

When I started off playing guitar, I loved playing both modern and classic hard rock. LOVED AC/DC, Led Zeppelin, Black Sabbath. In fact, during my first couple years of playing, I bought a giant AC/DC songbook and learned over 60 songs and solos. I worshipped Angus Young (and still do!)  In my teens I loved bands like Billy Talent, Three Days Grace, Breaking Benjamin, Foo Fighters, Rage Against the Machine, Incubus and especially Our Lady Peace.  In my late teens I started to focus on the lighter side of musical taste. Loved bands like The Fray, Goo Goo Dolls, Death Cab for Cutie, Lifehouse, and Coldplay. This is when I started to sing and play piano. From this time to today, bands like Ben Howard, Black Keys, Arctic Monkeys, Bon Iver, Biffy Clyro, Kings of Leon, Civil Wars, Imagine Dragons, Cold War Kids, Half Moon Run, Alt-J, The Arkells, and especially Mumford and Sons have had a big influence on me.

You have just began working with Great Canadian Entertainment Inc., how does it feel to be working with this up & coming company?

It’s really amazing to have such great partners that are so passionate about music and making their artist’s visions come true. You hear a lot of horror stories with new bands signing bad deals that plague them for the rest of their careers. The guys at GCE are not like that at all. They have a lot of integrity and are very honest, hard working and fair. They have helped me a great deal so far and I truly look forward to working with them in the years to come.

You will be releasing your debut single, “Caught Me” on May 4, what was the writing process like for this song?

During my time at The Nimbus School of Recording Arts, super producer Garth Richardson overheard me singing and playing an old piano during class, and asked me to come record my songs with my class at his personal studio.  “Caught Me” was written in preparation for this session. I had always loved playing in crazy open tunings, that I make up randomly. I stumbled upon a particularly weird one that resembled an Open-C tuning, and this song came to me very quickly while experimenting with it.  It turned out to be my favorite song of the session, and paved the way for my new direction in regards to my musical style.

You will also be releasing a music video for “Caught Me”, what was the highlight of shooting this video?

We shot the video in my old bands jam space out on a farm in rural Saskatchewan, as well as the pastures around the acreage where I grew up, just outside of Saskatoon.  It was really great to incorporate these places into the video as they have a lot of meaning to me.

What inspires you when you are writing a song?

I believe that music communicates real emotion, the same emotion that we get from going about life and experiencing it. So the more I live, feel, and experience, the more I have to write about.

I think as an emerging artist, this is a great way to consistently have something to talk about and promote. I think that there is so much music out there that dropping a full album right out of the gate has a good chance of getting lost in the sea of content. When you draw out the release, starting by creating zero barriers for fans to acquire first single, it encourages interaction and a better chance of you being able to resonate with people.

Will you be releasing music videos for each of the singles?

Yes for sure!  Great video content that accurately depicts the message of the song is really important to me.

How did you choose the name “Dreams In Colour” for the EP?

I believe that the first and most important step to realizing your dreams or accomplishing your goals is to think, visualize or picture yourself doing whatever it is you want to do, know matter how far off it seems. The title track of the EP begins with “My life is grey, but I dream in colour” I’ve been dreaming big with my music my whole life, even when life felt grey or dull.

Can you give us any insider information about the upcoming EP?

Not much, other than it’s the best music I’ve ever written! We do have some amazing people involved with producing and mixing the record though. That will be revealed upon release.

We are excited for our Western Canadian tour this September starting here in Saskatoon and ending at BreakOut West in Victoria!  Its my dream to do a full Canadian Tour, as soon as humanly possible.

I absolutely love The Arkells. Its my dream to open for them on tour!

We always like to include a small portion of questions that may help your fans learn something new and random about you, so here goes:

What was the first song you performed live in front of people?

At my grade eight talent show I played AC/DC’s Thunderstruck and Highway to Hell in front of the whole school. Also, my first standing O, so that’s cool.

If you had to explain your sound in one word, what would you choose?

I wish. I’m getting one soon.

If you were able to put together a festival show, which other Canadian artists would you want involved?

So many good bands it’d go on for weeks.  As long as Our Lady Peace headlined, I’d be happy!

Dream Big, and see the world.