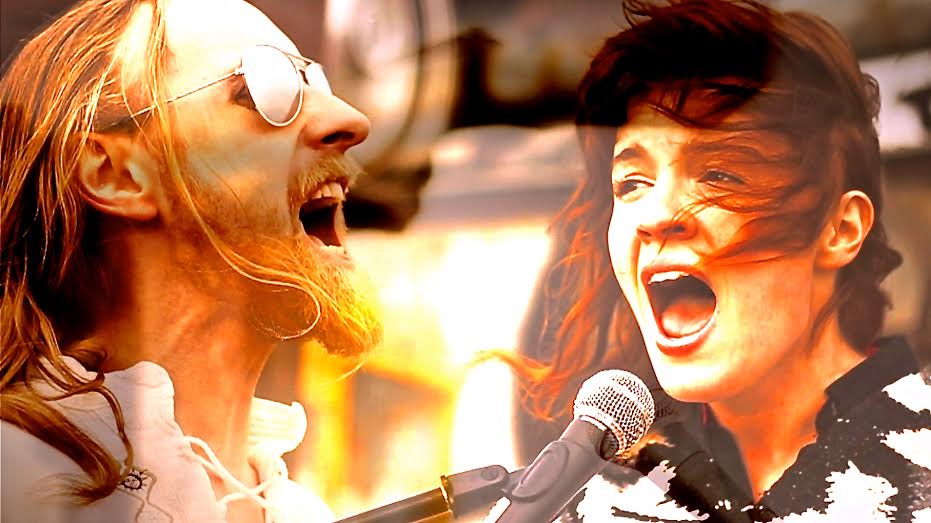 PandaCorn are a synth based rock band based out of Moose Jaw, Saskatchewan. The band have released a new video for their song Forgotten Machines yesterday (April 24, 2015). Keep reading to hear what they had to say about the release show for the video and their new music.

Brodie Mohninger; guitar and vocals and loops. Meg Nash; synths, and vocals; Ryan Schnell; drums. We started playing together in Moose Jaw Saskatchwan. We met through the local music scene, playing in different projects and going to shows. Brodie in Brain Sauce, Megan in her solo project and Ryan in Short Story.

You’re releasing the video for Forgotten Machines on April 24th at Amigo’s Cantina. What can people look forward to at this show?

We’re going to be debuting footage of the video along with other visuals by the director and editor of the video, Dave Howard. To play a bit more on the theme of Forgotten Machines it’ll feature SARCAN worthy television sets and old school VHS cameras. We’re also sharing the bill with some of our favourite Canadian artists, Jesse and the Dandelions and Colleen Brown.

Why was Forgotten Machines the song you chose to shoot a video for?

It was a great way to feature us both as the song is from both perspectives, one growing up urban and the other rural. Its about finding that common ground between the two that is what you leave behind. Its also an easy thing to interpret into a visual. We were toying with ideas about what to film and scoping out local wrecking yards, barns and even an archaic printing press. Ultimately we came across a scrapyard called Silver Star Salvage on the edge of town that had such an amazing visual aesthetic that we filmed most of the video there. We felt the owner was an artist in his own right in the way he arranged and piled his “forgotten machines” that we wanted to capture his work in this as well.

Do you have plans to shoot any more music videos?

Yeah, we have video of footage we compiled from Saskatoon live shows at MOSOfest and Vangelis that we’re putting together for our song Midnight Move. We also have a video of the recording session for an unreleased song we did at Avenue Recording in Saskatoon that we release later in the fall.

When can fans expect to hear some new music from you?

We will be releasing a single and video for, “Love Is a Quilt” later this year.

We always enjoy playing Midnight Move and Love Is a Quilt because of the emotion and interplay between the voices and lyrics, its fun to sing and the dynamics always seem to build right with the audience.

We hit the road at the end of April and are doing 14 dates across western Canada. You can check our Facebook for a complete list of dates.

Playing Ness Creek last year. We first up on the after hours stage and as Indigo Joseph finished their last song the MC threw over to us and we kicked of our set. I closed my eyes for the first half of the song and when I opened them there were 300 people crammed up against the stage. The rest of the gig got crazier with people dancing on stage and knocking over mic stands. Such a fun show and great moment that really made the positive vibe we’ve tried to put out with or our music feel real.

Mostly engineers and producers. We’ve been talking with Chris Notenboom of Robot Hive about laying down some new material.

Been spinning a lot of Mahogany Frogs disc and looking forward to their next release, as well as listening to Alex Vissia from Edmonton and Colleen Brown.