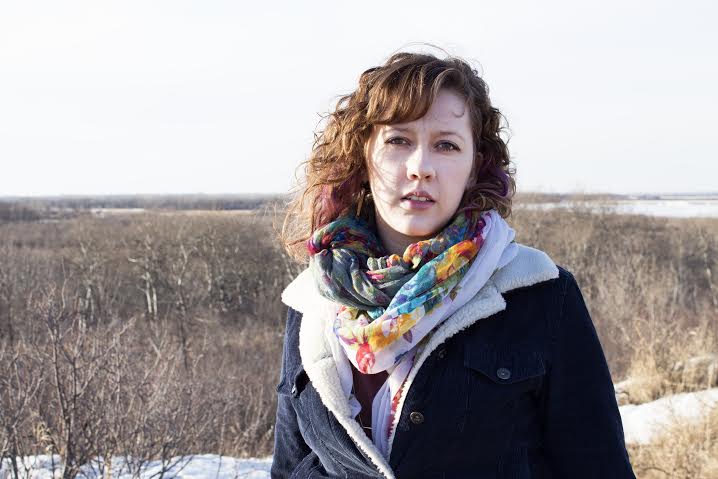 Rachel Fowlie-Neufeld, also known as FERN is a Saskatoon based folk artist, who released her debut EP, “Strange Fingerprints” through the Sound and Silence Collective in April 2014. This Spring in support of her EP, as well as her brand new single, “Combat” which was released yesterday, she will take off on a string of tour dates through the Prairies.

We had a chance to talk to FERN about her background, EP, new single and more! Continue reading to learn lots more about this talented Canadian folk artist. Also see below the interview for a full list of tour dates!

When did you realize you wanted to pursue music?

It’s tough to pick an exact moment. I’ve been writing music since my early teens, but didn’t share much of it until I was in my 20s. Sending songs to a couple of close friends and getting some important feedback/encouragement pushed me to start writing and performing more. It stayed an open mic kind of thing until Spring 2012 when I decided to sit down and record an EP (3 a.m. Fires) in my living room.  The recordings were all one takes, live off the floor because I only had one usb mic and didn’t know how to edit, but it was a personal challenge to see if I could put something out there. I’ve pretty much kept the ball rolling since.

Where did the name “Fern” come about for your name? Why not just use your real name?

Fern is my initials rearranged. When I first started performing I liked the anonymity a moniker and also thought people might have trouble spelling my hyphenated last name. So far its stuck.

You released your debut EP, “Strange Fingerprints” in April 2014, how was the response?

It’s been great! I wasn’t exactly expecting to make waves considering it’s my first studio EP, but I’ve had a couple of thoughtful reviews and lots of support in my home scene. I released it through The Sound and Silence Collective (a label based in Saskatoon) and they really helped get Strange Fingerprints into more hands than I could have on my own, so that was great.

You released a new single, “Combat” yesterday (April 21, 2015),  what can you tell us about the songwriting process on this song?

The finger-picking started out as part of a different song, but then the lyrics (to Combat) seemed to come all at once and fit better than what I had previously written so I went with it.

I had been performing it for almost a year before recording it, but made some pretty significant changes before going into the studio. I thought a lot about the ideas behind the song (love lost/conflict/self-reclamation) and how that fit in with its structure. Ultimately I decided to add a bridge/outro, which actually ended up being my favourite part of the song.

What influencing you when writing songs?

It could be anything, really. In the past my writing has been about exploring a certain feeling or state of mind and zeroing in on it through metaphor, but Strange Fingerprints was influenced a lot by childhood memories and the shift from adolescence to adulthood. Not that I’m entirely an adult yet. haha.

Right now I’m influenced by life events from a few years ago that I wasn’t able to work through at the time. Stay tuned for some breakup songs! 😉

I see that you have a full album in the works, which will be released in 2016, what can you tell us about that?

It will be typically angsty I think, but more raw and intricate. I expect it will feature more piano as well. I’m in a place where I’m experimenting more and feeling confident about the direction I want to take, so in my mind it’s going to be a masterpiece– I suppose we’ll see about that!

You will be taking off on a string of tour dates, through Saskatchewan and Alberta, what show are you most excited for?

I’m excited for all of them, but I would have to say Edmonton because a) I’ve never played there and b) It’s going to be really sweet house concert!! Mike Hudema puts on quite a few shows and he also just hosted Colleen Brown, so I’m feeling pretty good about the space.

Details here if any Edmonton folks are interested: https://www.eventbrite.ca/e/braden-gates-and-fern-an-intimate-house-concert-affair-tickets-16456105655

When can fans in other areas of Canada expect to see you heading their way?

That’s a great question! I’m still getting my touring legs so to speak, but I hope to go on a couple shorter tours in the next year and then plan a more extended cross-country tour once I’ve released a full length album. I have yet to play Eastern Canada, so I think that’s up first.

If you could choose any other Canadian band / artist to set off on a full Canadian tour with, who would you, choose?

The Weather Station! If only to hear Tamara Lindeman sing every night.

My go-to cover is Acid Tongue by Jenny Lewis.

TBH, I think it was Justin Timberlake ‘Justified.’ NO SHAME.

I saw Tanya Tagaq a couple months ago. It was craaaaazy. She’s unreal and so badass. I go to a lot of local shows as a fan too, though. Ominocity.com is a good intro to many of them!

I have a tattoo of a shark plane with the text “lady pilot” inside of it. The deluxe version of Neko Case’s last LP came with temporary tattoos that my friends and I put on to get pumped up for one of her shows in Vancouver (don’t judge-it was my birthday!). The next day I decided that I wanted it on my body for real, so my friend Leah walked me to a tattoo parlour by her place called Adorned and they made it happen.

It’s a tribute to my Aunty Beth who was a glider pilot. The song ‘Myth’ is also about her.

My next tattoo is going to be totally frivolous.

I haven’t gone on any yet this year, but early morning drives just outside the city are a favourite. I’ve found a couple nice spots tucked away off the highway that are really peaceful to just sit and drink a coffee in—especially after most of the snow has melted and things are starting to grow again. My brain goes into hyper-drive every Spring, so it helps calm me down and re-calibrate a little.

Hey! Hang in there.