By Remington Fioraso on April 21, 2015@https://twitter.com/RemingtonFD 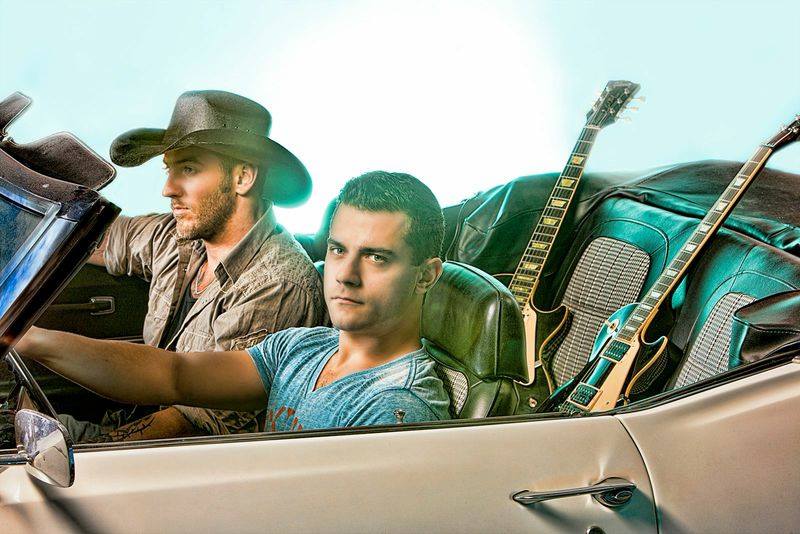 King and Cash is a new Canadian country duo consisting of Jordan Pritchett and Dan Arnold.  The two made their debut as King and Cash during the first leg of the Outlaws and Outsiders tour alongside Aaron Pritchett and Cory Marquardt.  They are set to begin the second leg of the tour in June hitting the East Coast.  Additionally, fans can expect to hear the debut releases including “Beer For That” soon.

Jordan: There are so many! Lately I’ve been listening to a lot of Elvis, and what a great place to start! The name King and Cash is a tribute to 2 greats, Elvis and Johnny Cash. They are big influences to me, but I really am a fan of many different genres, old and new. My dad’s been a huge influence to me in music, and with everything else in life.

Jordan: We met when he was on vacation in Penticton and I was up there for a management meeting. We hit it off, ended up partying and playing music and it went from there.

Dan: On the set of the bachelorette, we both lost out and decided to give up women and marry our guitars. It only made sense to start a band after that.

You both came from rock backgrounds, what influenced you into venturing into the country scene?

Jordan: Well, if you’d asked me 3 years ago if I thought I’d ever sing or play country, I probably would’ve laughed! But as I got older, I got smarter. I realized that country is fun. Country is catchy. Country players are good. Girls love country. Now I love country.

Dan: You grow up, you experience things. Country is about real life. I was raised on a farm. I worked rigs, I ran heavy equipment, I branded cattle, I seeded, I combined, that was just life for me and I related to that and wrote about it.

How did it feel playing your first shows as King and Cash during the Outlaws and Outsiders tour?

Jordan: Amazing! It was a party, the crowds were rowdy as hell!! It was a first tour for Dan and I, and we’re looking forward to playing the Ontario leg in June!

Dan: I kept pinching myself, even now, sitting waiting to go back again, it seems like a dream.

What did you learn from the first leg of the tour?

Jordan: Being surrounded by true professionals, we learned a thing or two every day. I watch my dad closely. He is so experienced and comfortable on any stage, and as a performer you try to see how what someone does on stage effects the whole crowd. The learning never stops!

Dan: How to take care of the human body.

How was the recording experience for your initial releases?

Jordan: Our time in the studio after tour was just unreal. It was an honour to have such talented people working on this project with us. We came out of it with 2 really cool songs that we’re very excited to have released very soon!

What can fans expect from the upcoming releases?  Is there an estimate release date yet?

Jordan: The release date is still being determined but it won’t be too long of a wait.

Dan: Probably around the beginning of May. Sonically, it’s very different than anything out there on the Canadian scene.

At Canadian Beats, we like to include ‘fun’ questions to help fans get to know a bit more about you.

-Those last 2 are just for “business purposes”.. lol

What is your favourite book?

What is your favourite thing to do on your downtime?

Dan: Probably go shooting, or write songs. Often one leads to another.

Jordan: A guitar, pen and papers.

Dan: A guitar, Jack Daniel’s, and my journal, so everyone knew I went out having a killer time..

Jordan: I’m excited to show our music to you all, and hope to see you at some shows soon!

Dan: Having a bad day?  There’s a beer for that