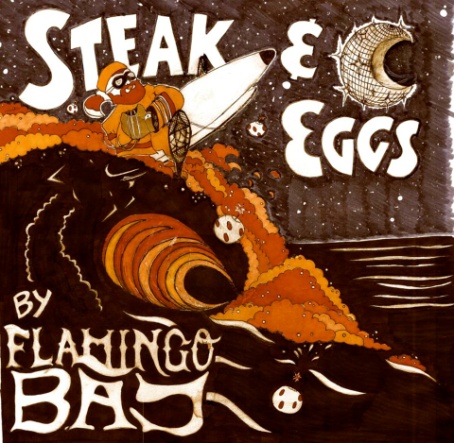 Flamingo Bay is releasing their second full length album called ‘Steak And Eggs’. They have released their first album called ‘Loco Pony’ in 2012, which has gotten many positive feedback from fans. Steak And Eggs is an album that is said to take the listener to the ages of Rock and a fix of the present day.

I have listened to the full length album and have picked out some of my favorite songs off of it. The first song I fully enjoyed is called ‘Checkout Line’. It starts out with the lead singer counting into to the start of the song which gives it an exciting feeling. The chorus is upbeat and the instrument break afterwards gives the song that rock sound that all rock fans will enjoy. The second song I fully enjoyed is called ‘Steak N’ Eggs. It is the last song on the album and it is another upbeat song that will keep the listener fully entertained and engaged in the song.

Overall the album has a fantastic flow of rock and is very consists to keeping the same sound though out. I fully recommend taking a listen to the album, you will be surprised at how much you will enjoy it.