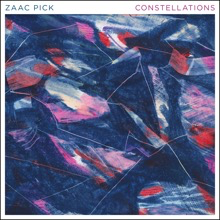 Zaac Pick has just released his latest album Constellations on April 14th. The Vancouver based folk-pop singer is already known for having his songs featured on many TV shows such as One Tree Hill and Rookie Blue, just to name a couple. Constellations was recorded over the course of almost two years, and let me tell you, good things take time.

The album starts out with “Impossible Blue”. My first thought was it had a very Mumford and Sons kind of feel to it but defiantly had its very own personality. I was instantly hooked on Zaac’s voice. It is so entrancing, so captivating. Every song flows perfectly into the next, making it very easy to just get lost in the music, and that is what sets apart good music and great music. “Roses” was my absolute favourite, the incredible strings paired with the smooth vocals will have this song playing in your head long after it’s over. Constellations comes to a close with the song “Kites”. Even though you probably aren’t ready for the end of this track list, it couldn’t have been executed any better. “Kites” leaves you feeling calm, collected, intrigued and completely wanting more.

This album is exactly what you throw on with a glass of wine in hand after a long day. I will be adding it to my favourites and I’m sure you will be as well. Zaac Pick is also hitting the road this month and these songs live would be nothing short of incredible! Be sure to check if he is stopping in a city near you!