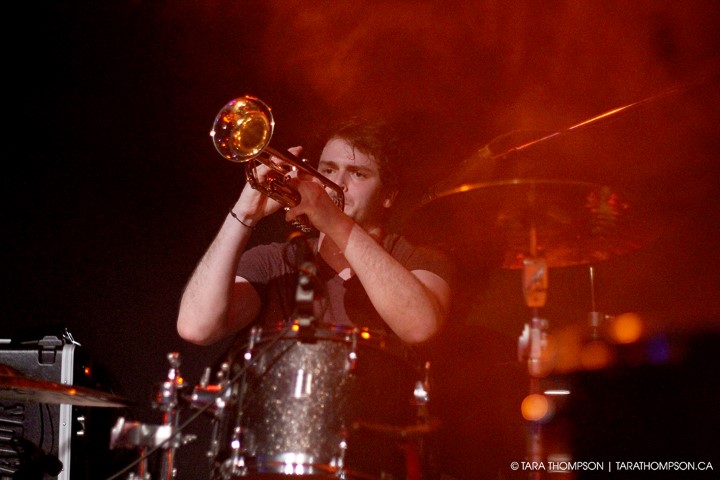 Saturday was the first day I was able to take in any of the conference side of things during ECMW. I headed down to the Delta at 2:30 for a “town hall” meeting about the state of the Atlantic Canadian music scene, where it’s headed and how it can be strengthened. There was a lot of talk about the business side of things and how to get the government to recognize the arts, but James Boyle, Executive Director of the Halifax Pop Explosion, brought up the most important point: “Ultimately, it’s got to be about making amazing f’n music, that’s where it has to start!”.

After that finished it was time to head down the hall for the keynote interview with engineer, producer and musician, Steve Albini. With no surprise, there wasn’t an empty seat in the room and people were standing against all walls. Steve has worked with bands such as The Pixies, Cheap Trick, Low and on Nirvana’s final studio album, In Utero. Ben Raynor, music critic for the Toronto Star, conducted the interview.

I got a short break until it was time to head to The Ship for the Breakout Stage. Morgan MacDonald opened the show with a few songs including one with a full band that he said up until the day before was just an acoustic song. Gillian Head followed up with some fiddle tunes influences by the modern style of contemporary fiddles and the traditional fiddlers of her home on Cape Breton Island. She even got off the stage and did some stepdancing before finishing her set. Up next was Kat McLevey who was one of the few I had previously seen. She looked like she was really enjoying herself and she had a huge crowd cheering for her the entire time. Husband and wife duo Tomato Tomato were definitely an act to be wow’ed by. Having never heard them before I didn’t know what to expect but it was unreal. Lisa played a washboard with her hands but also had both her feet going with pedals connected to a kick drum and a tambourine. My last act to catch at The Ship was one of my favourite local groups, Another North who always put on a great show.

Then it was time to head down to the MusicNL stage at The Rockhouse where Steve Maloney and the Wandering Kind were just getting ready to play. Steve had won the MusicNL Rising Star award this past year and it was easy to tell why as he had the audience in full attention. Waterfront Fire were up next to play a bunch of their new songs as well as a few old favourites. For anyone who hasn’t seen Waterfront Fire before, they’re definitely a band that works well when the crowd is really interacting and this time was no exception. In my opinion, there’s never enough Another North for one night so of course I was excited that I was able to catch a second set by them. Before ending my night it was time for a little bit of Everglow who gave out branded glowsticks before their set. The fact that this band is just two guys on stage is unreal because the sound that comes from them is what you’d expect from a 5 or 6 piece act.

Check out some pictures fro Day 3 on our Facebook page!