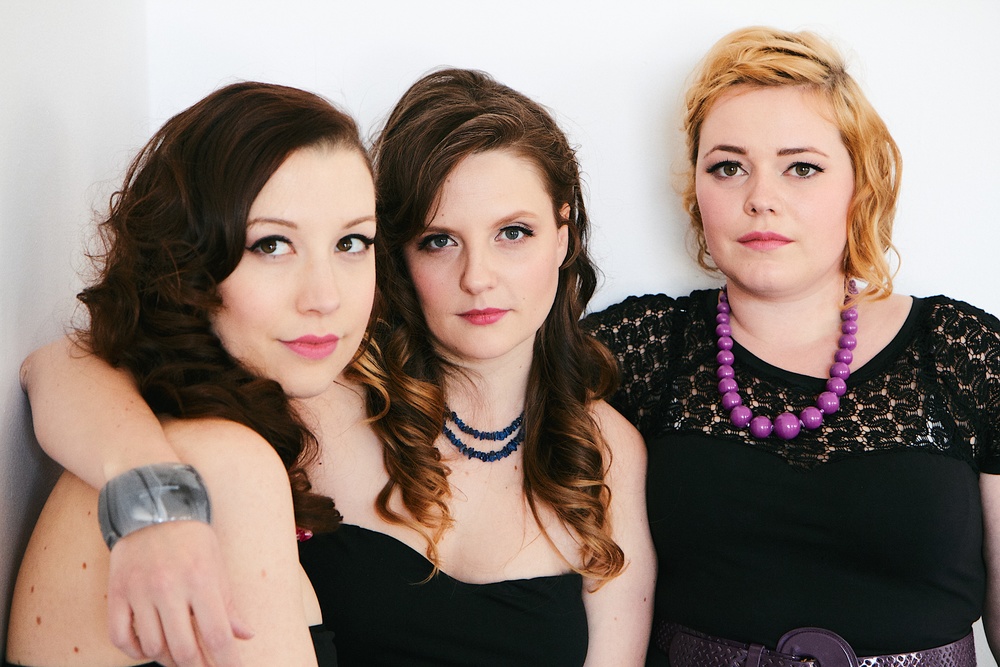 Toronto based band, The Spandettes are fronted by a fabulously talented trio of ladies, Alex Tait, Maggie Hopkins & Lizzy Clarke. That being said, the trio is backed by a seven-piece band. I have had a chance to ask the them some questions about their background, their music and lots more, so keep reading to find out more about this great Canadian band.

All three of us were into music at a super young age. We all aspired to be musicians and
singers when we were little girls. We got more serious about it in our late teens and early
twenties.

How did the three of you originally meet?

We all met in our first year studying music at Humber College. We were in the same
vocal master class with Trish Colter.

You are backed by a seven-piece band, what is the reasoning for having such a big band?

They give us this super funky, high-energy platform to really do our thing! Having a
three piece horn section is something that is becoming rare, for practical reasons. But it is
part of our signature sounds. We like the balance of having both a vocal trio and a horn trio, it gives us lots of musical options.

You have a unique sound described as Disco/ R&B/ Boogie, what is the inspiration behind this sound?

We draw our inspiration from three places: the 70’s retro Funk/RnB era, which was
the birth of so much amazing music, the 90’s acid-jazz funk revival with bands like Jamiroquai that influenced us as teenagers, and the future! We’re always trying to think ahead too and combine these throw-back influences with keeping our finger on the pulse.

You released your debut album, “Spandex Effect” in 2013, how was the response?

We had an amazing response in Japan! We’ve got a pretty loyal following there via
our label, P-Vine. We’re still waiting for Canada to really take notice – and we’re slowly but
surely getting there!

When can fans expect a new album?

We’re actually in pre-production right now! Should be out by mid-summer.

What can you tell us about the writing process of your music?

We’re really lucky to have quite a few excellent writers in the band! Usually someone
will bring in a song and we jam it, see if there are revisions, and re-visit the song after some edits. Every once in a while someone brings in a songs with every little detail mapped out and it’s perfect the first time! But usually there is an element of work-shopping.

If someone is able to see you live, what can they expect?

A crazy dance party! People have a really good time and cut loose at our shows. We usually try to have a dance-off at some point (and the reigning champ is the judge). We are full of energy when we play- it’s a real marathon for us!

Can fans expect a full Canadian tour at any point in the near future?

We would absolutely love to! Like field of dreams, if you book us, we will come 😉
The reason we haven’t yet, is purely practical. The expense of brining 10 musicians on the
road in such a spread out country is a bit daunting.

At Canadian Beats, we always like to include a small portion of fun questions that may help your fans learn something new about you, so let’s do it!

Think back to the first song you ever sang in public, what was it?

We had our debut concert in Jan of 2008. I think we opened the show with our song “Dig Deeper” which ended up being one of the singles on our first album, Spandex Effect.

What is your current favourite Canadian band and/or artist?

Tough call!! We love so many Canadian artists! On the massive star pop scene, we’re super into Drake. Tell him we’ll sing backups for him anytime 😉

If you had to listen to one album for the rest of your life, which would you choose?

Ahhh! So hard. We love so much music. Individually we would probably each pick different albums. Our biggest influence is probably the Pointer Sisters. Much like us, they played with the boundaries in terms of genre, and man could they pull off anything! So let’s say their greatest hits.

If you were able to travel anywhere in the world on tour, where would you choose?

Japan!! We want to play for our fans there so badly!

To our existing fans: Thank you so much for the love and support we have received
over the years! To our new fans: welcome into our little musical world! We’re so happy to
share our music with new people!!