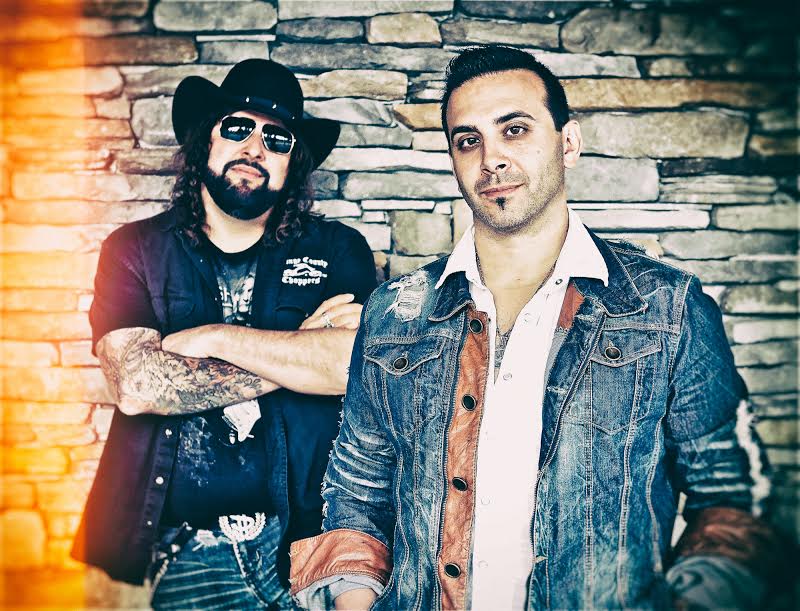 Country/ Rock duo, Sons Command is made up of Shawn Meehan & Sal Piamonte. The band has their debut EP coming out in the near future, and we had a chance to ask them some questions about their background, their upcoming music, and more!

When did “Sons Command” form?

Shawn approached Sal in June 2014 to see if he would be interested in possibly becoming a solo male country artist, but Sal told Shawn “screw that, this is our chance to finally start the band we’ve been trying to start together for years!” By August 2014, SC was already recording their first 4 songs, travelling back and forth from Vancouver and Ottawa.

How did you choose the name for the band?

We wanted a name that represented our Patriotic and proud side, as well as a band name that sounded like it meant business but without sounding hokey. Sal pulled the name “Sons Command” straight from the Canadian National Anthem, and when Shawn heard it, there was a unanimous “that’s it, we got our name.”

Your sound is considered “Modern Country/ Rock”, did you always know this was the type of music you wanted to pursue?

We both have affinities for Southern Rock and Rock n’ Roll, there’s no question. The bands that really unite our Southern musical tastes are bands like The Eagles, Lynyrd Skynyrd, Alabama…bands that really blend textured vocal harmonies with that soulful southern sound.

You released the first single, “Go For A Ride” which is off of your upcoming EP, how has the fan response been?

Amazing! “Go For A Ride” was really our first introduction to the Country world as a band. We wanted people to know that our message was about “putting your foot on the gas and never looking back” kinda thing. We wanted people to not only connect with our message, but with our positive energy and spark. I think this first single has far surpassed any expectations we might have had for it.

You have released a lyric video for “Go For A Ride”, but when can we expect to see an Official Music Video?

Well!!!…Safe to say that there are a lot of things in the works right now. A cross Canada tour, the recording of new songs, etc…BUT, we would be lying if we didn’t say that our first official video shoot is scheduled to be shot in Ottawa on May 9-10 while we are in town during our tour…it’s going to be a hoot!

You have a few tour dates coming up, starting with April 26th at the Roxy, what can fans expect from these shows?

I think fans can expect to see an honest, energetic, and kick ass performance. It’s one thing to have well produced songs, but we pride ourselves on our harmonies and live musical experience. Being that April 26th is in fact our first official “Sons Command” live show, fans will be able to see a tight band, complete with textured vocal harmonies, and ready to kick some butt! …I’m sure there will be excited jitters, and of course, a little anxiousness…but all in a good way. The more the band tours, the tighter we’ll get…no question.

Let’s talk about your upcoming EP, can you explain your writing process?

Ideas can originate musically or lyrically from either of us. Up until now, all of our songs have been written back and forth via voice notes and text messages…the first time we ever played the songs together after writing them was when we recorded them in studio! Typically, lyrics and concepts can come from either one of us. Sal tackles the lyrics, and then together, they discuss/edit/tweak the music/lyrics entire song kinda thing…it’s a very symbiotic writing partnership, each partner bringing equal value to the table…everything always being done for the best of the song, not the individual.

What is your favourite song on the EP?

Tough question…the truth is we don’t think we can answer that right now! Lol…we’ve just completed an album’s worth of recording, and are excited about all of the new tunes… we’d both agree that “Go For A Ride” holds a sentimental place in our hearts as it is not only our official debut single on the album, but it speaks to the bond/magic that we share: “Choke back the tears, kick in to gear, foot on the gas til’ we’re runnin’ on fumes”…it’s about pursuing a dream and never looking back.

If you were able to go on tour with any other Canadian band/artist, who would you choose? Why?

The Roadhammers look like our kinda guys…rockin’, energetic, and super talented…plus they look like they don’t seem to mind puttin’ back the odd beer or two 😉

Canadian Beats is all about Canadian music, so of course we have to ask…who is your favourite Canadian bands/ artists?

Favourite is a relative term! Certain bands are our favourites not only for their music, but for the barriers they broke, or for the message/legacies they have left. We admire and respect many of our fellow Canuck artists…artists like Bryan Adams, Shania Twain, Rush to name some…

What instruments can you play? Are there any you would like to learn but haven’t yet?

Sal: I am a jack of many musical instruments, master of none.

Shawn: I am proficient on the geetar, would like to learn the kazoo but Sal won’t let me.

YES!!!…we both have more tattoos than guitars!…Sal’s left arm is fully sleeved (a tribute tattoo to his grandparents and friends he’s lost), as well as tattoos on shin/ankle, as well as a tattoo that we’ll just say is located somewhere under his belt buckle!…Shawn’s right arm is sleeved, other arm is tattoo’d, and both have plans for more! Stay tuned!

What was the first song you remember singing in front of a crowd?

Can we answer for each other here in the hypothetical realm?…For example, if Sal was to “guess” what song Shawn first sang in public, it would probably be “Hot For Teacher” by Van Halen….Shawn would probably say that Sal’s first publicly performed song was “Livin’ La Vida Loca” by Ricky Martin! lol

We love you very much. Please come to all of our shows. Please tell all your friends about us-we’ll love them too. Please sign up for our Mailing List and follow us on social media. Always remember to say Please and Thank You. Thank You!