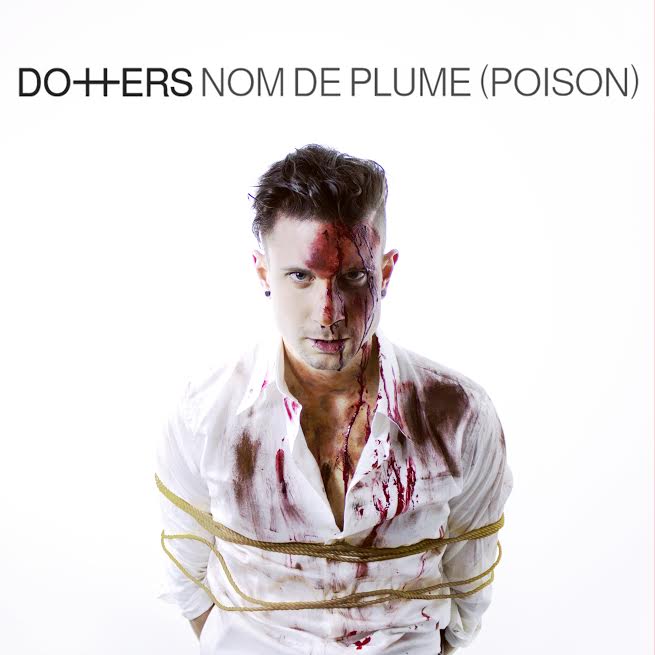 Dotters is the dark, experimental brainchild of Nigel John Crowe (of ByStarlight). The first single “Nom De Plume (Poison)” was released on March 19, 2015, and we had the chance to ask Nigel some questions about this great new project, the upcoming music and more!

When did you decide to start your new project, Dotters?

I’m not sure I ever really made a conscious “decision” to start Dotters. Anything I do musically has to happen naturally. At the end of last summer, things started really slowing down for the band. I’m completely incapable of slowing down when it comes to music however. So Dotters sort of emerged as a creative response to a frustrating situation.

Anyone who knows of ByStarlight, knows that it’s pure pop music, but Dotters is more of a dark rock, what made you want to pursue something darker?

Friends who have known me for a long time won’t be too surprised with the darker direction I don’t think. I grew up on metal and hardcore and those genres tend to deal with more serious subject matter. My interests tend to lean towards more melodic, electronic stuff these days, but the sense of honesty in the writing has always remained with me. And honestly, things have been rough. While I’ve been fortune enough to have some amazing experiences and meet some really inspirational people through music, it’s also been a soul-crushing experience at times. You put your all into everything you do, and sometimes for one reason or another it just goes nowhere. And for every good person there is on your side, there’s someone ready to screw you over and walk all over you if it gets them a step ahead. But I won’t stop doing this because it’s what I love and believe in. Dotters is me pushing back harder than I’ve been pushed.

You released your first single, “Nom De Plume (Poison)” on March 20, how has the response been?

The response has been better than I could have ever expected. I’ve had people who I haven’t talked to in years messaging me telling me how much they love it. It’s definitely tapped into a different audience than BSL did and that’s really rewarding to me.

Will you release an official video for the single?

Not sure yet to be honest! I’d love to. We’ll have to wait and see though…

You worked with Jeff Zipp, along with your brother, Tavish Crowe on the single, will they continue to work with you on upcoming songs?

Oh hell yeah! Jeff and I have a great dynamic when we work together. We think very differently but for some reason it combines into something beautiful. I’ll definitely be working with Tavish more. We’ve been making music together for 20 some years now and will be till our music sounds stupid and irrelevant to our grandchildren.

Are there any other artists you would like to collaborate with on future songs?

Definitely. The freedom this project allows me is something I’m really excited about. I’m already in talks with a couple wicked producers to do remixes of Nom De Plume. I’d love to write with some more talented people and see what comes though. If Danny Boy Styles, Ben Billions, Chvrches, Purity Ring or Deadmau5 are happening to read this, feel free to give me a shout 😉

Can you explain your songwriting process to us?

It’s really all over the place, haha. It’s often stream of consciousness, I’ll have an idea and others will just kind of come from it. Sometimes I’ll hear the entire song in my head in one go. That’s always the most rewarding, and of course the easiest. When I actually sit down with the intent to write, I tend to approach things visually. I’ll have a storyboard or picture or feeling I want to try to translate into music. The melody and sounds will all be an attempt to paint that picture visually to the listener, through sound.

When can fans expect more from Dotters?

Fans can expect more from Dotters soon! I intend to release at the same rate that I write. So basically I’m going to bombard you with music. Haha.

Since, we are all about Canadian music, who are your current favourite Canadian bands/ artists?

The Weeknd. Been a big fan of that guy for a very long time.

Last, but not least is there anything you’d like to say to the readers?

Well first off, thank you so much for taking the time to think of such insightful questions! It’s been a joy doing this interview. To the readers, all I can really say is that I hope you guys enjoy the music I’m making. I promise to continue to only make music I can honestly and fully stand behind. Thank you to the people who continue to support me in this journey.