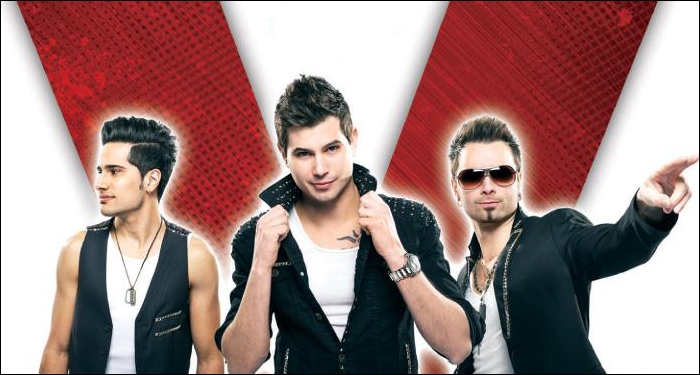 Toronto-based band, Manic Drive are no stranger to the Canadian music scene, they’ve been around for quite some time, with their debut album “Reason For Motion” released in 2005, and the release of their newest album just last year, “VIP”. Most recently they were awarded the Juno for Best Contemporary Christian/ Gospel Album of the Year, and now we’ve had a chance to ask them a few questions about their background, recent releases and their win at the Junos,

My brother (Shawn) and I (Michael) always had a passion of music since we were young children. Our Father was musical and our Mother was well…the visionary. They both greatly supported our love of Music and took us out to local concerts in the Toronto area. At the ages of 8 and 9, we started chasing the dream of performing music and even started a little family band with our dad…yes we do have CD’s of us sounding like the Chipmunks haha.

How did you choose the name “Manic Drive”?

It was a collaborative effort between my brother and I back in 2004. Shawn really thought the word “manic” was fun and describe our personality and style of the band. We later attached the word “drive” as if to be driven in life. We figured it conveyed a cool message for those to radically and manically be driven to follow their passion. Whatever road that may be. Naturally after saying the name out loud of few times, we thought it sounded rock n roll.

Your newest album, “VIP” was released in October of 2014, how has the response been?

The response to “VIP” has been our greatest one yet. During our radio release in the U.S for our new single, we were invited to perform in our hometown Toronto at the ACC (Air Canada Centre) with Grammy Award winning Hip Hop artist Lecrea. Over 15,000 was in attendance. The rush we had was unexplainable. Since that performance, “VIP” was Top 40 in sales on iTunes in the first week of its release, climbed to #1 on Top 30 Billboard Christian Rock, #12 on Top 30 Billboard CHR and recently, through a promotional campaign through iTunes, we received over 70,000 downloads of “VIP” in a week. On top of all that excitement, we were incredibly honoured to take home a Juno Award for our album “VIP”. The response has been simply overwhelming and beautiful.

You had released previous albums including “Reasons For Motion” in 2005 and “Epic” in 2011, how has your sound changed from these releases to “VIP”?

Our music has definitely morphed over the years. I think just naturally, being fans of all styles of music ranging from Rock N Roll, Funk, Metal, R&B, Gospel and Soul we wanted to challenge ourselves as artists and try different elements in our music. With “Reason For Motion” we were teenagers listening to a lot of awesome hard rock albums from Linkin Park and Incubus. Over the years, we wanted to branch out musically, we’ve been listening to the classics of Stevie Wonder, Michael Jackson, Aerosmith, Beatles and been enjoying modern artists such as Maroon 5, Bruno Mars and One Republic. All these influences has been fused into our music creating this edge pop sound that has I think in turn, has developed into a sound that’s our own.

You won a Juno award for “Best Contemporary Christian/ Gospel Album Of The Year” this year, how does that feel?

We have been fans of the Junos and Canadian music since we were kids. Some of our favourite artists are Canadian. Alanis Morissette, Our Lady Peace, Rush, I Mother Earth, Sarah McLaughlin, Magic, Three Days Grace…and the list goes on. To be among our musical heroes and those who have inspired us was an honour in itself. To have won such a prestigious award and to be acknowledged in Canada among iconic Canadian artists, was an experience all on its own.  I won’t lie, I was a little nervous during our acceptance speech seeing Geddy Lee sitting in front.

The title track from the album has done great on Youtube, gaining over 350,000 views between the video & lyric video, was that surprising to you?

In the past, we had gain some success through Top 30 Billboard singles “Walls” “Money” and “Good Times” and we were very pleased and encouraged by those numbers, however, reaching nearly 400, 000 between our lyric video and music video was not expected. We have been truly moved by the response.

We are always song writing and preparing for our next project. Currently we are focused on our album and our single “VIP”  launching in Canada and the U.S.

Are there any Canadian bands or artist that you would like to collaborate with?

Man, that’s so tough! There are so many amazing Canadian artist that we love. It would have to be a tie between Raine Maida and Alanis Morisette. Always been huge fans of their music.

Can fans expect a Cross Canada tour from you anytime soon?

Yes! We are anticipating more Canadian tour dates for 2015 – 2016. We have done a couple coast to coast Canadian tours through Maple Noise and Wintour in 2011 and 2013 and we love traveling this beautiful country rocking out for our Canadian Maniacs. As of now we are booking dates and even looking to collaborate with other artists.

Here, at Canadian Beats we like to include a portion of “fun” questions that may help fans learn something new about you, so here goes:

It was in Scarborourgh in the basement of a church called “The One Way Inn” The band was called “The Daniel Band” one of my favourite Canadian rock bands.

If you were stranded on a desert island, what three items would you want to have with you?

A fishing rod, knife (something that Rambo would use) and a water filtration system…maybe something from Brita…LOL

What is your all-time favourite lyric?

There is no greater feeling than for an artist to have his or her music listen to. To have their art and message  inspire and encourage people from different walks in life. We cannot thank you enough for your endless support and love for our music. We love you crazy MANIACS!