By Remington Fioraso on March 30, 2015@https://twitter.com/RemingtonFD 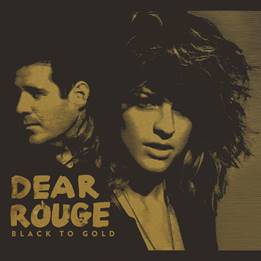 Dear Rouge is a synth rock artist from Vancouver, BC.  Formed in 2012, the group consists of husband and wife Drew and Danielle McTaggart.  The duo released their first and second releases that year – two EP’s entitled “Heads Up! Watch Out!” and “Kids Wanna Know.”  On March 30, 2015, Dear Rouge released their first full-length release called “Black to Gold.”  The album contains eleven tracks including the singles “I Heard I Had,” “Best Look Lately,” and “Black to Gold.”

I really enjoyed listening to the record.  vocals and instrumentals go together well.  The album has a Metric kind of vibe to it, yet maintains its own sound to it. Black to Gold is quite addicting and tracks can easily be put on repeat.  The tracks standing out the most on the release for me were “Best Look Lately,” “Kids Wanna Know,” and “I Heard I Had.”  It is a solid listen and I definitely cannot wait to hear more from the group.

I recommend listening to the singles “I Heard I Had” and “Black to Gold” to get a ‘taste’ of the album.  If you enjoy them, Black to Gold by Dear Rouge is definitely worth picking up via iTunes or on physical CD.