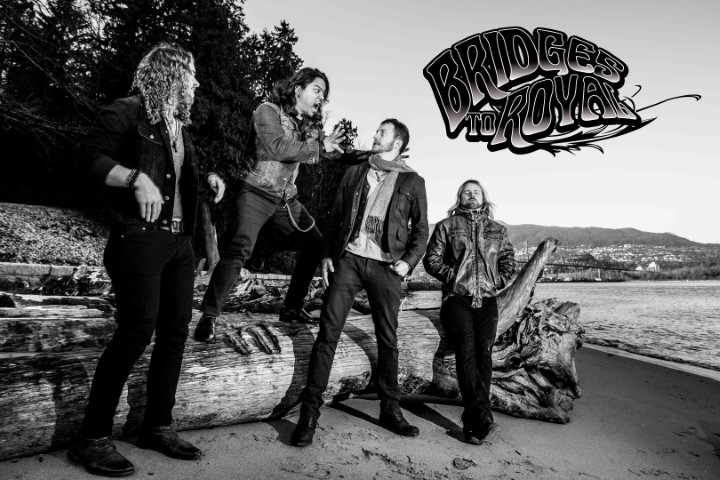 I had the chance to ask Amrik a few questions about their background, new music and more!

When did you realize you wanted to seriously pursue music?

I knew early in my life music was always going to be a big part of who I am. It was only after starting this journey with Aaron, James, and Cody that Bridges To Royal found its groove.

How did the band meet & form?

Aaron and I met in high-school, we were both wholly un-cool and needed a friend to survive through high-school with; Aaron randomly met James at a coffee shop; Cody materialized in our rehearsal studio one night after we prayed for a hard-hitting drummer, he even came with his own kit. We never questioned this event, we simply accepted it and moved on.

How did you choose the name, “Bridges To Royal”?

It truly is a harrowing tale involving broken hearts and dreams. Love was found and lost, bonds of our brotherhood were strained. At one point James managed to stave off a pack of hungry lionesses with a mere thought, whilst atop his majestic battle elephant nonetheless. The elephants name is Pinky. The journey was worth it though; we walked away with a band name we love, with our lives and limbs intact.

Who have been your main musical influences through your life?

I have had many musical influences through my life. Jerry Cantrell, Billy Corgan, Josh Homme, Scott Holiday, Kim Thayil, Jimmy Page, and John Frusciante are some guitar player names that come to mind. As a band our main influences are a good mix of Alice In Chains, Soundgarden, Foo Fighters, Led Zeppelin, AC/DC, and Dolly Parton.

Can you explain your song writing process to us?

The music seems to happen on its own, as long as we are all there to pour our heart and soul into it, but, we know we are on to something when each of us are like “F*ck yah, that felt great!”. We most definitely argue about it, we laugh about it, we drink about it…It’s basically a giant cluster f*ck until a song emerges.

I can neither confirm nor deny that we have new music coming for the summer.

You have been uploading acoustic sets of your songs, including Dirty & Wicked Wild Way, can fans expect more videos like this?

We will be releasing another one shortly. Our fans can definitely expect more videos like those. Wicked Wild Ways was filmed at one of our manager Clyde Hill’s Christmas party. We had a lot of fun sorting out an acoustic set and the idea had stuck with us since doing the Christmas party.

Watching these live acoustic videos, makes me wonder about tours, when can fans expect to see you on a cross Canadian tour?

We are definitely planning a tour, we will be posting updates on our website and social media as soon as we start confirming some dates.

If you were to put together a tour consisting of yourself and two other Canadian bands, which bands would you want to include?

This is a tough one…probably Monster Truck and The Trews

Since we are all about Canadian music, we have to ask you the obvious question…who is your current favorite Canadian band or artist?

My playlist consists of, but not limited to The New Pornographers, The Trews, The Tragically Hip, The Zolas, The Pack AD, japandroids, Death From Above 1979, and a several more.

Here, at Canadian Beats we always like to include a small portion of “fun” questions that may help your fans learn something new and interesting about you, so here goes:

Think back to your young days, what was the first song you ever sang in front of others?

hmmmm….most likely “Stille Nacht” or “O Tannenbaum” when I sang in our German Choir Group.

What was the first instrument you learned to play?

Can you remember the first concert you ever attended? What was it?

It was probably an SNFU show at the old York Theater on Commercial Drive in Vancouver. I cracked a few ribs that night, all in good fun of course.

Yes, two of them I got when I was young and I just needed any excuse to piss of my dad. My most recent one is my son’s name on my forearm.

If you could chat with any musician from the past or present, who would you choose?

Mozart, I have soooo many questions about his pet starling. Scott Holiday is one of the living musicians I would love the opportunity to chat with.

Our drummer Cody is single, willing, and quite able.