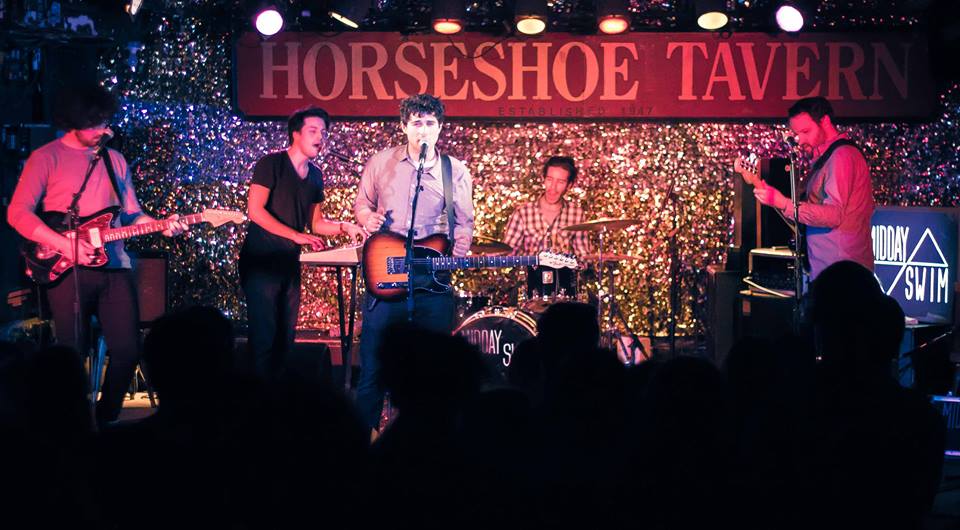 Midday Swim is an indie pop/rock five piece band from Toronto. The band, made up of David Krygier-Baum (vocals, guitars), Stephan Ermel (keyboards, vocals), Sebastian Shinwell (guitar, vocals), Craig Saltz (bass, vocals) and Max Trefler (drums) may be new as a whole, but the members have all had quite a lot of experience within the industry. In his former band Max Trefler won CBC’s Cover me Canada Contest in 2011, as well as had a single on the top 10 iTunes rock charts and has shared the stage with heavy hitters such as Blue Rodeo, Craig Saltz has scored multiple movies, David Krygier-Baum is a music educator, Stephan Ermel is a classically trained pianist with a background in one man shows in theatre, and Sebastian Shinwell also plays in The Holy Gasp.

They have been busy with releasing their two singles “Summer Eyes” and “We Got The Feeling” and are preparing to release their new album. Be sure to follow them on their social media sites so you don’t miss anything with the upcoming release.

Why did you decide to come together as a band?

We’ve been making music together in different projects for nearly a decade, so we are very comfortable playing together. Midday Swim began after David had written the demos for what would later become ‘Summer Eyes’ and ‘We Got the Feeling’. Even before being worked on and recorded those early demos had a maturity that felt different from anything we’d produced before, so a fresh start under a new name seemed appropriate. And Midday Swim was born!

How was the response to your first two singles?

The response has been great. I think a big part of that is the fact that we decided to make a music video for our first single. I think people were really into it. So we’re stoked to release our second video for our third single ‘Back to You’. We’re in the middle of editing it as we speak. We also got nods from some of Canada’s leading voices in music such as Alan Cross and Exclaim.

Do the singles give any hints on what to expect from the album?

Absolutely! There is definitely a common thread sound-wise throughout the album. The sound has lots of driving rhythms, lush vocals and atmospheric guitars. So if you like what you’ve been hearing so far, you can look forward to the rest of the album!

Can you give your fans any details on the album?

Our album comes out May 1st and we are playing an Indie88 showcase on May 8th for CMW at The Mod Club.

Dreamy indie pop/rock. It’s a really big sound with a huge sonic scape. There are lots of melodic vocals and harmonies going on. The songs have an element of celebration and chantey choruses.

In a lot of ways we’re very patriotic where Toronto is concerned, so of course a big one for us is Broken Social Scene. But we also take influence from Arcade Fire and Wilco. Some influences from earlier years of listening to music also include Simon and Garfunkel and The Beatles.

Do you feel your combined experience from your past musical endeavors helps you as a band?

Of course! When you’ve been playing together for as long as we have, you start to understand your band mates strengths and weaknesses, and it’s more clear where you fit in and what your role needs to be. When we perform live we always bring high energy and our genuine happiness of playing together really reads.

What are some of your main inspirations for song writing?

We want to make music that people can move to and that translates well to a live setting. As a 5 piece band we can create a big sound and have lots of vocal harmonies going on. We often look to our personal or group experiences for inspiration for out songs. The lyrics we write can also apply to most listeners like love and longing, or having a good time with your friends.

For this album David had already recorded a bunch of demo tracks. So essentially, the process was sifting through that raw material, picking out what we liked and then refining it. We took those tracks into the band room and shaped them collectively into what you’ll hear on the album.

What do you think the most played song or album on your iPod is?

I know each of us is going to have a very different answer to that question:

Craig: All of the Midday Swim discography (he’s too busy mixing our music to listen to anybody else’s 🙂

We love you all. See you on May 8th at the Mod Club for our Indie88 showcase at Canadian Music Week!