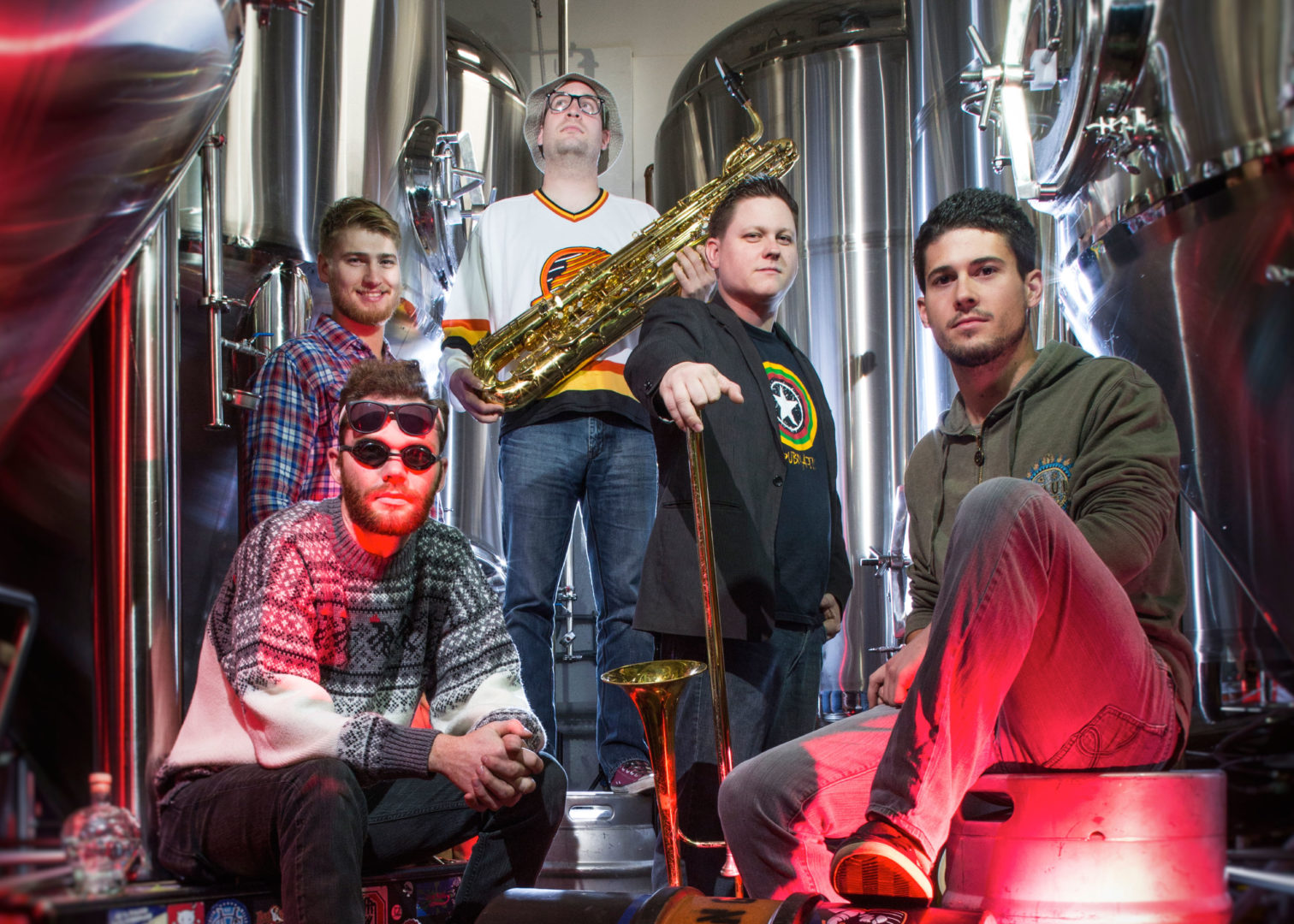 I recently had the chance to ask British Columbia based band, Dope Soda a few questions about their beginnings, “Carbonation” LP, upcoming tour dates, and more.

For more about their upcoming tour, head here:
http://www.dopesoda.com

The original lineup came together when Matt Carter and I formed a new group out of our previous ska group, The Kiltlifters, and the current lineup has been together since 2013.

We met our current guitarist at a show in our hometown, Nanaimo.  Some kid snuck into the green room, started drinking our beer, took me aside, and said “anytime you guys need a substitute guitar player, I’ll be there. I’ll have all the parts ready to go.” I laughed because this was the same tactic that got me into the Kiltlifters years ago!

Mikey, the guitarist, is a monster; the rest of the band, Phil, Jesse and Andrew (trumpet, drums and bass) came after by recommendation and friendship through The Bananafish Dance Orchestra. I couldn’t be happier witht he group of guys we have now. Each one can hold their own when put in the spotlight and I respect their musicianship and friendship in every way possible.

How was the name Dope Soda chosen?

Beer is the dopest form of soda. And we love beer.

You released your 1st full length album, “Carbonation” in 2014, how was the response from fans?

Great! We have received awesome feedback from fans and, based on that album, we were just nominated for Group of the Year and Song of the Year (“Bullets”) by the Vancouver Island Music Awards.

You seem to be inspired by a wide variety of genres, from ska, punk, jazz, pop, and more. How did you figure out that all these sounds went together?

A lot of it comes from our live show. Sometimes when Mikey or Phil are taking epic solos in a reggae tune we get super hyped and just switch to punk rock on the spot, or to a fast swinging bebop beat just to goof off. The guys love to switch up genres–keeps the show fresh and interesting–and sometimes, four shows later, we might switch up a song’s style again. No two shows are ever the same.

On “Carbonation,” a lot of the songs were pre-written by Matt or me, so it was just a matter of fine-tuning the styles and layout. For our next album, we went and rented a remote cabin in Youbou, brought 3 kegs of beer and six massive steaks, and played music (with the occasional Halo break) for three days. No distractions and no obligations, and it resulted in the creation of an album’s worth of new tunes. It was the best thing we could have ever done and I recommend it to any band out there.

You have a bunch of tour dates coming up in BC & AB on the Dope Soda Bottle Drive tour, when can the rest of Canada expect a tour?

We definitely want to make our way out east at some point. The Amnesia Rock festival in Quebec is packed full of influential bands, and we drool over the thought of wiggling in on that lineup. 2016 might be our year!

How did you choose the tour name?

We surveyed our fans and that one came out on top. However, we have already had people ask where they can drop off the bottles and one venue already said that they wouldn’t be too impressed if our fans started bringing empties to our shows.

What show are you most excited for in the upcoming list?

Tough question. I’ve been to Guilt & Co (Vancouver) to see other bands and it was always such a fun time. Sun Peaks Resort is a good one; they have supported us right from day one and we play there every year. This year we’re playing an after party for the Mountain Dew Tour Ski and Snowboard competition. Mother Mother is playing the outdoor stage that night so we are stoked to see them. Kelowna is also a big supporter of our music and Kelly from WetApe is amazing. Always hooking us up with sick spots.

For me, right now, is a new song I wrote about my cat Simon. It’s called “Simon the Cat,” clever enough. I made a video for it too. I like cats, specifically Simon.

When can fans expect new music from Dope Soda?

Well as soon as we get back from tour we’re diving into Nimbus Studios to pump out a couple singles, and I think we might do one more of those cabin retreats before recording an EP. But hopefully you will get a single for the summer and possibly an album for the fall.

Canadian Beats is all about Canadian music, who is your favourite Canadian band and/or artist?

That’s tough; there are so many great acts out there, and so many of them are our friends. To name a few:

Here, at Canadian Beats we like to include a small portion of random questions that may help fans get to know you better, so here goes:

If you were asked to put together a tour with 2 other Canadian bands, who would you choose?

Do you have any tattoos, if so, what are they?

What is your favourite movie soundtrack?

A Nightmare Before Christmas – Danny Elfman

If you were able to write a song for any movie, which would you choose?

Last, but not least, is there anything your fans?

Drink up, hit the dance floor and don’t stop till they kick you out. Then have a street party!