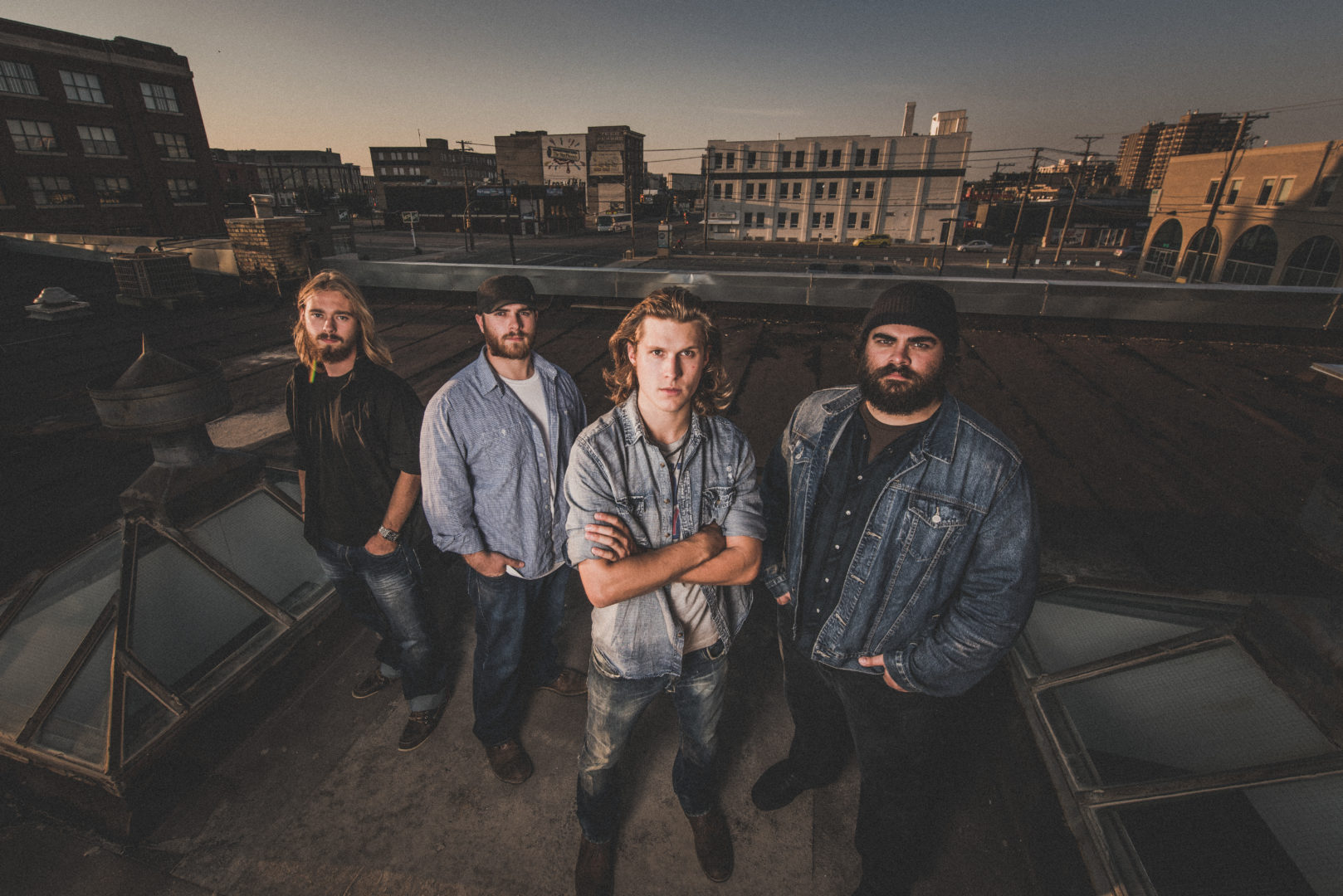 League of Wolves are a Saskatoon rock band made up of Dillon Currie (Vocals/ Guitar), Aspen Beveridge (Vocals/ Guitar), Greig Beveridge (Drums/ Vocals) and Ethan Stork (Bass). They are releasing their self-titled album on April 7th, but be sure to keep an eye out on Canadian Beats for a pre-release review on March 23! Following the release of the album, the band will set off on a Eastern and Western Canadian tour, you won’t want to miss out on that!

We had a chance to ask the band a few questions about their history, the upcoming release, and more, keep reading to find out much more about this rising Canadian band.

How did you choose the name, “League Of Wolves”?

We chose the name because we were intrigued by a story our (Aspen and Greig) dad told us. It involved a friend who was a helicopter pilot and his job was to capture wild wolves on Manitoulin Island, Ontario. On one occasion he had shot a wolf with a tranquilizer dart and moved in to tag or collar it and it attacked and bit him. When we heard the story while trying to figure out a name, we decided to use it somehow. We feel that the name suits us and when we randomly met Madchild (Swollen Members) he agreed that it was bad-ass – so needless to say, we’re keeping it! (haha)

You have been childhood friends, but when did you make the conscious decision that you wanted to pursue music as a career path?

It was after playing our first show at one of the hometown bars in Maple Creek. We played at the ‘Sper’ as it’s called. It was packed full of our friends and family and the bar sold a record amount of beer, so despite our nervousness, inability to remember lyrics and countless mistakes we called it a success. Since then we’ve tried to keep the ball rolling by putting a lot of time into writing, practicing and playing shows as much as we possibly can.

Who have been your biggest music influences throughout your life?

All of us share some common influences and bands we love. They range from some classic favorites like the Beatles, CCR and Zeppelin to modern rock groups like Kings of Leon, the Black Keys, Arctic Monkeys and Queens of the Stone Age. We’re also huge fans of the Canadian rock scene – Wintersleep, Sam Roberts Band, Hollerado and also bands like Two Hours Traffic and The Stills (who are unfortunately no longer bands).

You released an EP entitled “The Motions” in 2013, and are about to release your debut self-titled full length album, how has your sound changed since the release of “The Motions”?

We did put some of the tracks from the EP on the album, but overall our sound has changed and evolved. It has a grittier edge to it and it’s more focused on transferring the energy of the songs directly to the audience. The direction of the songs is now more about getting people’s attention and getting them moving and singing. There is meaning in the songs and in the lyrics, but they are also meant to make you dance to the beat and sing the melodies.

Can you tell me more about recording the album in a previously abandoned country school in Saskatchewan?

It was a crazy idea at first. I (Aspen) walked into the school and thought, “this is a very unique place, but how would I set up in here? Do the outlets work? Is the roof going to cave in?”. It was kind of sketchy before my parents put some work into it and fixed it up. Thanks to them, after a short time it was liveable – running water, beds, clean floors, fixed roof and ready to set up a studio! The character of the place makes it really easy to work there and it’s inspiring and exciting to be out in the middle of nowhere sometimes. We didn’t have distractions from friends coming over or work schedules, like we might have in the city, we didn’t have time constraints or stress (like in a commercial studio) and we had tall ceilings and hardwood floors to make the recordings come to life.

Usually I (Aspen) will have an idea that starts with a guitar part and a melody or I’ll record a rough demo of the song I’m working on, and I’ll bring it to the guys. If the reaction is positive and feels like everyone’s getting excited about it we’ll jam it out and hope for good things to happen. From there we might arrange things further and make small changes that improve the song. We usually don’t settle on the song in a short period of time. Typically, the song takes months of working out the kinks, playing it live and feeling the reaction of the audience and sometimes taking advice from some of our musician friends. I’m writing all the time, usually drawing from personal experiences and getting ideas from books I stumble upon. One book that has given me at least one song idea is called “Piapot Trails”, it was left in the school house went it was shut down and it holds a ton of historical information and stories about the people and places surrounding the area.

What has been your main inspiration during writing this album?

The songs share some common themes and in general involve heartbreak and loss.  The song ‘Runaway’ is about seeing someone you really wanted to keep all to yourself just walking out the door.   ‘Don’t Wanna Be Alone’ also shares this theme. Other songs venture out from that though. Youngstown is based on the Tim Burton movie ‘Big Fish’, in particular the part of the story where the main character comes across a town that is perfect but he can never leave.

Of the 13 songs on the album, which is your favourite?

As a group, I’m not sure we have a favourite. At least not that I’m aware of.  I like the songs with guitar solos. (haha)

You recently released a video for “Runaway” which is off of the new album, what was the highlight of shooting the video?

Working with Prehistoric Productions (the film crew) was a really fun time. We all got along well and became comfortable working with each other quite fast. Delicious, free food and refreshments from all of our parents during the shoot was also a bonus!

How did you decide that “Runaway” would be the lead single from the album?

We all felt like it was gonna be the first single when the album was coming together. It stood out among the others as an appealing song for almost anyone who listened to it or saw us play it live. It fits the mold for an upbeat, catchy and lively song that speaks to the listener immediately. We also felt that it was an accurate first impression and representation of our band and the album as a whole.  It was a shoe-in for the first single for us.

How has the response from fans been for this video?

It has been great. Some of us were hoping for a couple thousand views to draw some attention to the band and have people get interested in the album. Fortunately, right now we’ve got over 4200 views in just over a week and for an independent band releasing their first album, we are really happy with that!

You will be starting an Eastern and Western Canadian tour soon after the release, what can fans expect from a live show?

We always aim to deliver on stage. We aren’t the type of band that stares head-down or looks bored on stage – we want to impact the audience and bring some energy into the room. Often shows end with lots of sweat, hoarse vocal cords and a feeling that we’ve connected with the people in the crowd.

You have opened for quite a few well known Canadian bands in the past, such as The Trews, Glorious Sons & One Bad Son, which other Canadian bands would you love to tour with?

We have always wanted to tour with a band like The Sheepdogs or Wintersleep. Any band that we’ve looked up to really.

Canadian Beats is all about Canadian music, so who is your favourite Canadian band and/or artist?

We are huge supporters of Canadian bands and follow many of them. Hard to name a favourite, but we always make an effort to catch bands like Yukon Blonde, Hollerado, Dan Mangan, The Sheepdogs, Arkells, Sam Roberts Band, Wintersleep, The Dudes, Kathleen Edwards, Andy Shauf and many more!

Here, at Canadian Beats we like to include a small portion of “fun” questions that may help your fans learn something new about you, so here goes:

Our bass player (Ethan) had an interesting first concert with us. We went to a venue here in Saskatoon, while Ethan was still under age. He made his way in with a fake ID that said he was 29 and a lot shorter than he is. He certainly did not even look 19 at the time, so it was a small miracle he made his way in. The show was Two Hours Traffic and they rocked!

I’m a huge fan of Go With the Flow, by Queens of the Stone Age. Very dark and almost has a graphic novel vibe to it.

If you had to choose one album to listen to for the rest of your life, what would you choose? Why?

Elliott Smith – Either/Or. Even though we are a rock band, we started out around the campfire playing acoustic guitars. The album is timeless and never gets old.

Which lyric (other than one of your own) means the most to you?

I wouldn’t want to answer this for everyone else in the band, but one of my (Aspen) favourite lines in a song is “There was laughter once, there were pretty songs, pull the metal shards, thin my clotted blood, oh my rotted skin, oh my burning skies, I will close my eyes” . Quite disturbing and dark, but powerful lyrics from Jaws of Life by Wintersleep.

None of us have tattoos. We better work on our street cred I guess. I’m pretty sure I heard Dillon (our singer) say that he wanted a big green dragon on his back and Ethan (bass player) wanted a  tattoo of a sewer rat on his chest…..weird I know.

If you were asked to give a new band some advice, what would that be?

Be ready to spend MANY hours in a van with other smelly, sometimes annoying band-mates. Look for a Tim Horton’s sponsorship. Also, work really hard and be humble – take advice from others who are at the level you want to be.

Thanks for caring about League of Wolves!