A huge crowd of people came to the small, yet cozy basement inside Dakota Tavern on Wednesday March 11th, for hometown band Sun K’s album release party; and what a party it was. They were joined by the likes of Raven Shields and Jerry Leger who performed as well.

Opening the night for Sun K’s album release party was Raven Shields.  It became noticeable to me that this is a unique band with talent. In the old looking basement venue, with lit candles on every table and a disco ball, my eyes were glued to the front of the stage where the lead singer along with the backup singer, keyboardist and tambourine player (yes, one person does all that) entertained. It was amazing to me that one person could do so many things at the same time while performing. Raven Shields started off with a song called “Take Me Home”.  Before long, people were by the stage, getting into the music, enjoying Raven Shields performance and their unique sound. Ending their set with a great new song “Sea foam Blue”, Raven Shields was a great band to start off the night and get the energy in the room going. 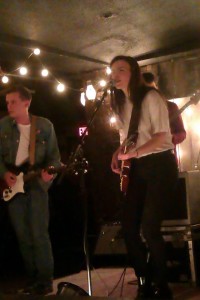 Following Raven Shields was Jerry Leger. I would describe his music as the type of music my parents listen to; sounding similar to The Beatles. The word around the Tavern that night was that Jerry is an amazingly, talented song writer, which I witnessed this during his performance. The crowd was so high energy; more so than I had seen throughout the night to that point. Groups of two suddenly started gathering to the centre of the room and began dancing.  It was an insane set, nicely done by Jerry Leger. 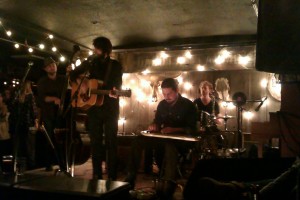 Lastly, up to perform was the band everyone was waiting for. It was Sun K’s album release party, and it was finally their time to perform. As they always do, Sun K gave a phenomenal, entertaining performance. 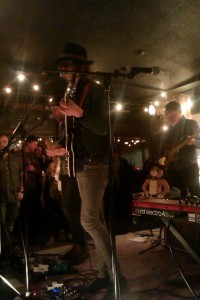 They even brought special guest, Puss N Boots (in doll form of course) up on stage with them. Immediately, the band had everyone engaged, dancing, clapping; People were standing on chairs and tables dancing. They even got me dancing… and I don’t dance. Kristian, the lead singer was all over the place- jumping up and down, jumping on ledges and tables as he continues to sing and strum his guitar; Stuart playing both the keyboard and trumpet, sometimes at the same time.  Kevin, tapping the base, took over the microphone for one song, and just blew everyone including myself away. 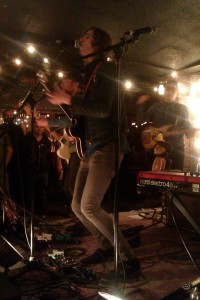 The room was just jumping with excitement and good times. What a way to end their album release party!! Raven Shields, Jerry Leger, and Sun K are three extremely talented artists definitely worth checking out.

I’m Jenna, the founder and editor of Canadian Beats. I have had a strong love for Canadian music, which started many years ago. I have a passion for promoting these talented Canadian bands and artists, and that’s how Canadian Beats came to be.

Canadian Beats has grown to become more than media, and what a journey it’s been.