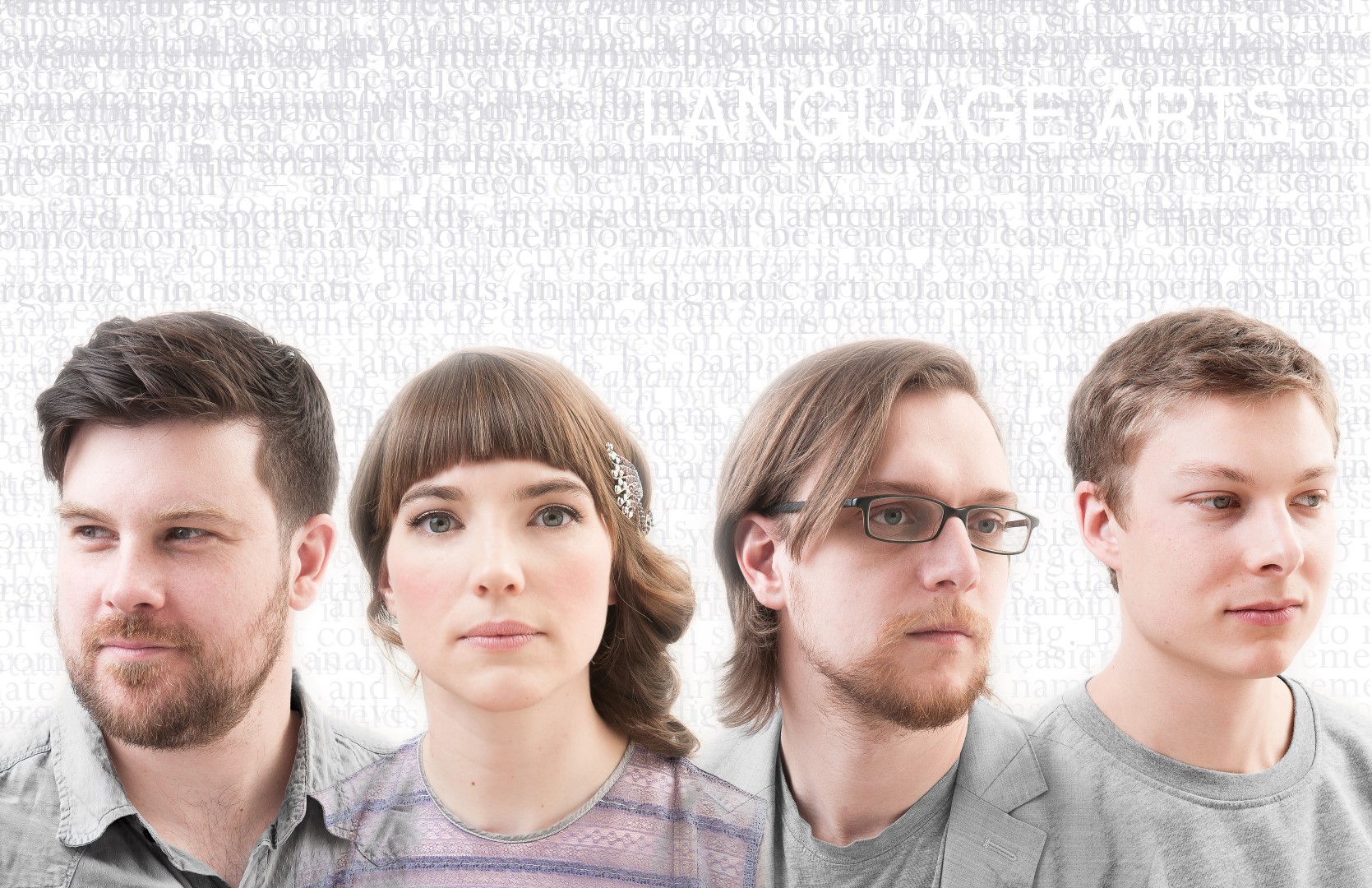 Language Arts is a four piece art pop band based in Toronto. Under MapleMusic Recordings Kristen Cudmore and her bandmates Neil MacIntosh, Joel Visentin and Soren Nissen released their album ‘Wonderkind’ in April of last year. With many shows throughout March and April, be sure to find out all you need know about this band before you check out one of their shows when they stop in your town on their Wonderkind Spring Tour.

How did you come up with the name for your band?

LA: When I first started the band, I wasn’t comfortable with my singing voice, so I rapped and it got pretty wordy. I got into the idea of the words and music being equal entities, it only made sense to have that show in our band name. Now that I lean more towards my singing voice, the words still are written with rap sensibilities, so it gives the listener an idea of what they are going to hear before pressing play.

If someone hasn’t listened to your music before, how would you describe it to them? Is there a song you’d suggest they listen to first?

Kristen: On our albums the music is carefully composed. We use layers in a semi-mathematical way, braiding in melodies, counter-melodies and harmonies to pull different emotions to match the subject matter of the words. Live, it is a high energy show with slightly improvised moments. We have been coined as a genre defying act and it is important to us to keep our sound original. That is something we strive for. My favourite song on the record is ‘Old Familiar’ but the songs are all quite different from one another. I am too bonded with them to recommend one over another.

Neil: It can be subtle, dynamic and bombastic. Bombastic breaks of passion!!! I’d say ‘What if it Were To Be Reworked?’ If I were a wrestler, I would want it to be my intro music.

Joel: How about, a rock fueled cosmic sound journey? I guess ‘Oh Tangible World’ covers all of the ground of what we do.

What were some of the inspirations and influences behind ‘Wonderkind’?

LA: The people I love and the people I have lost. The people who helped me grow as a person and a musician. It is an homage to them.

What was it like working with Darryl Neudorf as your producer for ‘Wonderkind’?

LA: Darryl is the absolute best. He brings music to life in a way through his mix that is so inspiring and humbling. We learn a lot from him but it is also effortless. He forced us all out of our shell in a way we didn’t expect. He also has a really amazing sequenced suit (a toriador) that Joel wore to track in, one day. On other days he would cheer us on by quoting cheezy movies like ‘The Fast and the Furious’. I truly believe he put his heart on this record too. He believes in us, as artists and, to us, it is the biggest honour yet.

LA: High energy music. Utmost sincerely. Our goofiness. Possibly a light show or lasers depending on the venue. Joel is playing synth bass, keys, effects and singing. A high learning curve of multitasking, that he has solidly grasped. Neil is an animal behind the kit, one of the best drummers I have ever seen live. He makes the funniest faces and he sings gangs. I (Kristen), am awkwardly dorky. I do light looping, have lots of guitar tones and try and play and sing slightly out of my comfort zone, so that I can be in the moment with the music and my band mates.

Are you playing somewhere on this tour where you haven’t played before?

LA: Band jokes. Meeting new people and bands. Seeing how people live outside of our music bubble in Toronto.

Here at Canadian Beats we like to throw in a few questions so your fans can get to know you a bit better:

If you could collaborate with any artist, who would it be?

LA: Jim Henson (he is dead, but does that matter?)

If you were in charge of a weekend long music festival, who would be on the bill?

Top three places in the world you would like to travel?

Kristen: What the Heck Festival in Anacortes Washington, put on by Mount Erie, best weekend of music, community and friendship, of my life!

Neil: Queens of the Stoneage, at Koolhaus, the Eravulgaris tour

Do you have any Canadian bands/artists that you would recommend to your fans?