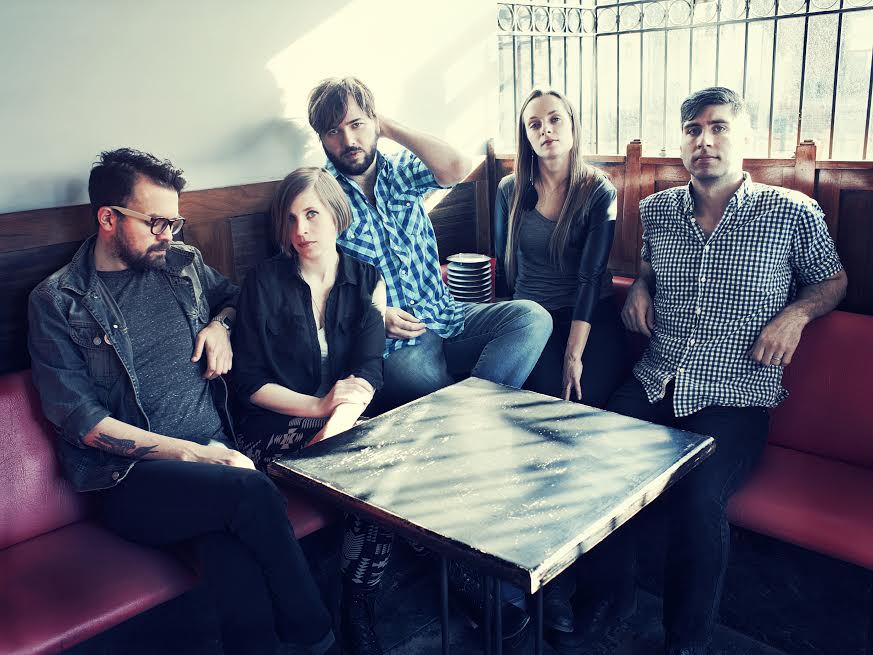 Toronto based indie-rock band, CANVAS has just released their debut LP entitled “sticktoitiveness”. On top of that, the band will be heading out on a eastern Canadian tour, stretching from Windsor, ON to Charlottetown, PEI. We recently had the opportunity to ask the band a few questions about the new LP, the tour, and more!

How did you choose the band name, CANVAS?

Someone mentioned it at a party.  I liked the idea of starting a new band with a blank canvas, so it stuck.

How did the band form?

After my former band went their separate ways, I immediately got to work writing over twenty songs in a matter of a couple of weeks. Working alone for the first time in years, I took the opportunity to record myself playing all the instruments on these new tracks.  Once I had an album ready, I sought out the right talent from the local Toronto scene to help bring the songs to life on stage. That journey was full of twists and turns, from a chance encounter at a dive bar, to tracking down old friends and protégés, to cold-calls, all to find that perfect fit.  Hearing the songs played live with full harmonies and a new energy was exciting and motivating.

You recently release your debut LP, “sticktoitiveness” on March 3, how has the response been from the fans?

Great so far, although we’re really looking forward to taking the songs on the road.  We are heading out on tour in support with a lot of great bands across Canada starting March 16th, and will be heading home to headline the Horseshoe on April 2nd.

How did you choose the name for the LP? What does it mean?

There’s been a lot of ups and downs over the last few years, and I was looking for the right phrase or word to capture the idea of not giving up in spite of the odds or whatever else is going on in your life – so ‘sticktoitiveness’ seemed appropriate.  At the same time I was working on the Canvas album, I was also producing and recording the album ‘Happy Times’ by Splash’N Boots, which is now nominated for a Juno award, so I’m amazed I was able to find some moments of zen in there while juggling it all and still put out these records.  The title is also a reference to the Canadian music scene, and how it can be a long climb.  (that was an alternate title).

Can you describe your writing process?

I usually write in clusters, say for a specific project or album.  I’ll either pick up a guitar or sit at a synth and start layering parts, whatever comes to me and start singing over that.  That’s one way.  The other way is much easier, where I’ll be walking or driving along and a melody just pops into my head and I’ll record it right away and eventually put an arrangement around it.

What song has the most meaning to you on the LP?

‘The Soul Who’.  A lot of my songs are pep talks to myself – you kinda need that as a musician sometimes.  This song has a lot of that.  Holding onto the idea that ‘the best is yet to come’, even if the present is tough going.  It’s also about taking a step back and taking stock of your life, and realizing how you can never really predict where you end up, or being ‘the soul who’…

You are about to take off on an eastern Canada tour, which stop are you most excited about?

Well, playing Baba’s in Charlottetown on St. Patrick’s day is up there for sure.  We’re also playing a big show at the University of New Brunswick.  The big highlight though will probably be headlining the Horseshoe for our album release party on April 2nd.

We came in first place at the 2014 Hamilton Music and Film Fest based on our live performance, which I guess means we are doing something right.  People can expect solid musicianship, high-energy and tunes they won’t forget.  If you want hooks, we’ve got them.  if you want a long meandering jam, well we might just throw that in too.

Social media is a huge part of the music industry now days, how do you feel about it?

I love it actually.  I’m a tech nerd myself and love being able to do everything online.  I wouldn’t say it’s a necessary evil, it’s just necessary.

Canadian Beats is all about Canadian music, so of course, we want to know who are your current favourite Canadian bands/artists?

I’ve always been a big fan of all of Ryan Kennedy’s bands out of Peterborough, so really digging his Kennedy Cult project.  Also been listening to Pierre Kwenders and Fontarabie out of Montreal.  And of course, still holding out for a Land of Talk reunion.

We always like to include a small portion of “fun” questions that may help your fans learn something new about the band, so here goes:

I would probably need someone to jog my memory about my first concert, but I did grow up singing and hearing hymns performed in church so I guess that was the first live music I witnessed.  The first real concert I attended was the U2 Zoo TV tour at the CNE, but I was so far back I’m not sure that counts.  The first memorable one was Van Halen at the Molson Ampitheatre.  My friends and I were actually more there to hear Our Lady Peace play – it was pretty empty at the time because I don’t think too many people knew about them.  In any event, as a joke we ripped up an old dish rag (I think it was my mom’s old pyjamas), and made a Van Halen flag out of it.  A friend ran to the stage, threw it up, and Sammy Hagar wrapped it around his waist.  So yeah, if you check out the live DVD, Sammy Hagar is wearing my mom’s nighty.

Right now I’m producing and writing on songs for the new album by jazz singer Tia Brazda, so my go-to songs are really any of the ones we’re working on.

Probably Depeche Mode. They inspired me to start writing music on synths as a kid and try to take it to the stage.

If you have a day off, what could we find you doing?

What’s that?  But seriously… what is that?

If you were to put together a festival, which Canadian bands / artists would you want to play?

Do you you have any tattoos? If so, what are they?

Last but not least, is there anything your fans?

Check out our website www.canvastunes.com to see when we’re playing live, and we promise you won’t be disappointed.