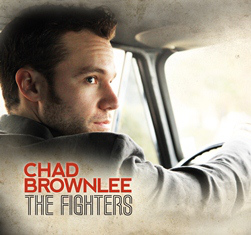 Chad Brownlee, former NHL player current Canadian country artist released his album ‘The Fighters’ in June of 2014. With plenty of awards and nominations under his belt and touring with genre giants such as Dierks Bentley, Deric Ruttan, and Jason Blaine, the singer from Langley, BC hit the roads for his own coast to coast headlining tour in March of 2015.

I’ve said it many times before that it’s hard to find an artist that can actually sound just like they do on their recorded music as they do in a live show but Brownlee sounds even better, if that’s possible. The 11 track release shows off his musical talent and impressive vocal range. My favourites off the album would have to be “Fallin’ Over You”, the title track, “Matches” and “Just Because”. There honestly isn’t a bad song on the album and I can guarantee my favourites will change every time I listen to it. The songs go from upbeat, feel good, perfect for summer jams to emotional ballads and everything in between.

From start to finish, the entire 40 or so minutes of the album is amazing. There’s a song perfect for any playlist and any listener, whether they like country music or not. Although this is the first album I have listened to of Brownlee’s, I’m anxious to see how he follows it.

When The Lights Go Down Tour: http://whenthelightsgodowntour.com/tour-dates/