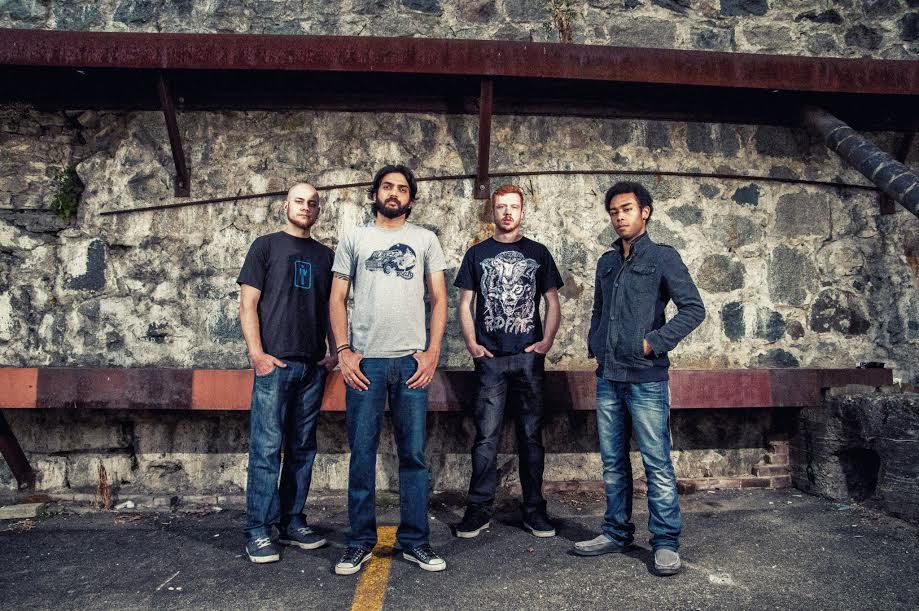 Liars and Lions are from Vancouver, BC who originally started as a 3 piece but moved into a four piece in 2014. With influences drawing from many different types of music, the band are ready to take it to the next step and see what happens. Keep reading to see whats going to happen.

We’re a 4-piece band from Vancouver, BC. We’ve got Frazer Pelling on drums and backing vocals, Devin Turner on bass, Nick Waterman on guitar and Imaad Dalal on guitar and lead vocals.

After becoming a three piece in 2011 with the addition of Devin, was it a natural progression to add a second guitar player with Nick in 2014? Did you ever think about staying as a three piece?

We actually had a second guitarist join the band, along with Devin, but it ended up being a short-lived experiment. We always had plans to add a fourth or maybe even a fifth member, but didn’t pursue it actively and ended up getting pretty comfortable as a 3-piece. It wasn’t until Nick became available that we actually decided to take that step.

You met Devin through his work as an audio engineer while recording some songs but how did you meet Nick?

Nick was in another band called the Special Tease, and we actually played a show or two with them, getting to know them along way. When they decided to go their separate ways, we got together with Nick for a jam or two, and immediately noticed the difference in our sound. And since we got along so well, Nick joined the band officially very soon after that. It’s awesome to have that second guitar thickening up our sound, and providing a better balance.

How do you usually go about writing new songs?

In the past, our song-writing process was a little restrictive in the sense that one of us would come up with the bulk of a new song and then we would collaborate to complete it. It would usually begin with a main riff or chorus concept and expand from there, but it wasn’t truly collaborative from start to finish. We often found that when we actually started to practice or record those songs, we had to rework certain parts or even rewrite things because they didn’t exactly fit together as well as we had initially envisioned. Going forward with the new material we’re working on, we’re really focusing on writing together as a unit as much as we can, so that everyone’s on the same page the whole way through. It’s already proving to be a much more satisfying way of doing things, where all of us are able to contribute and have a say in the direction of the songs.

Do you have an plans for recording a full length album or EP?

Hopefully sometime in the near future! We’re in the process of recording a couple of our newer songs, and writing new material. Over the coming months, we’ll be focusing on writing as much as we can, so that we have a good selection of songs to choose from for an EP or an album.

We all have our favourites individually, but we really like songs like Walk Away, or the newer songs, like Vultures, because people really get into them. There’s no better feeling than watching the audience rock out and show their enjoyment, because we feed off that energy. At the same time, those songs have some technically challenging parts, and some really cool changes that allow us to showcase a little of what we can do.

We’re working on the plans for our first tour, but it’s in the very early stages. Ideally, we’d love to be on the road sooner rather than later, and hopefully we’ll have that set up for sometime in the next few months!

One of the coolest things is having people recognize you away from the shows. There have been a few times where one of us has been stopped at a gas station, or the mall and asked, “You’re in a band right? Are you that guy from Liars and Lions? I’ve seen you guys a few times, you rock!” We love playing the music that we write, and it’s really satisfying and exciting when we hear the positive feedback from our friends and fans.

We all have different musical backgrounds, but one of the reasons we get along so well together is our common yet varied tastes in music. Though we try not to mimic any one band or artist because we’re trying to craft our own sound, we do draw inspiration from bands like Periphery, Animals as Leaders, Dream Theater, Intervals, Alter Bridge, Soundgarden, Led Zeppelin, and Black Sabbath, just to name a few.

We’d love to have the opportunity to work with any of the artists or bands that inspire us, but right now, we’re just enjoying playing shows and networking with local bands in Vancouver. We’ve become good friends with the guys in Killing Vogue, Bridges to Royal or Beyond the Confines, and we’re just enjoying sharing our experiences and knowledge, to move everyone forward.

In our honest opinion, focusing on where people are from and pushing nationalism is impeding our social and spiritual development and really divides people into categories instead of realizing we are all the same and need similar things to be compassionate and prosper. We don’t gravitate to certain bands or artists just because they are Canadian, but rather we’re drawn towards those from whom we can learn and grow, and who are open to learning from and experiencing our interpretations of music. That being said, there are a couple of bands who happen to be from Canada who we really enjoy, like our local friends in Killing Vogue or Bridges to Royal or Beyond the confines, and bands like Intervals or Protest the Hero.

Last, but not least, do you have anything you’d like to say to your fans?

We’d just like to say thank you to everyone for spreading the word and the for the tremendous support we’ve received so far. We love hearing from you so please get in touch! And stay tuned for some new songs, coming very soon!