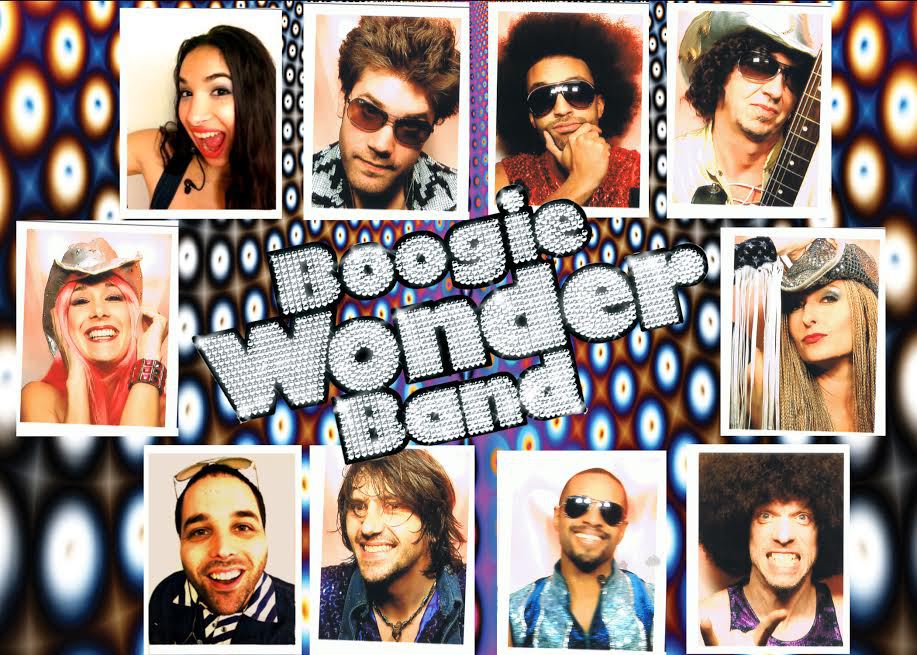 Ten piece cover band , “Boogie Wonder Band’’ is Montreal’s hottest disco funk band. With their sound and unique costumes, they are sure to bring you back to the 70’s. Formed in 1996, Boogie Wonder Band has performed in over 450 cities, including at events such as Formula One, The Grey Cup, and PGA tours all across North America. In 2001 they released an album of original songs, called “FLY”. Later releasing a cover album titled “Kiss My Disco” in 2004 , and another in 2010 called “Supercool”. Their ability to put on highly entertaining shows for any crowd has paid off, eventually getting the opportunity to work with Gloria Gaynor, Kool and The Gang, and KC and The Sunshine Band. Boogie Wonder Band has performed for many A-list celebrities including the likes of Donald Trump, Jon Bon Jovi and Celine Dion.

What inspired the name of your band?

The name of the band was inspired by the Earth,Wind & Fire song Boogie Wonder Land, it is such a cool name and it says it all about us, we are bringing you with us to the land of Disco! Now that we have been around for a while we hope that when people hear our name it brings back great memories!

Why did you choose to become a disco funk band compared to all the other many genres there are?

We are playing disco and funk because this kind of music is so inspiring, the musicians who wrote and played those songs are phenomenal. We are a 10 piece-band with percussions, brass , 3 singers, drums, guitar, bass and keys and for us to recreate this music that’s  fully orchestrated we need to practice and work on our arrangements to make it sound as good as possible! We also perform with choreography, costumes, and a full light show. We are trying to bring this music back to life in a concert format, but with some original flavour, like if you stepped into Studio 54 in 1976!! We just love it!!

You’ve performed in over 450 cities. Where is somewhere you would like to perform that you haven’t?

We’ve had the chance to travel a lot over the years, we’ve been to big and small cities, but every where we go, we try to get a taste of the local scene…For example, it was our first time playing in Windsor/Sarnia area and we had a blast, beautiful theatres, great people, good food. We have played in many places….Tokyo, Hong Kong, Macau, Monaco, Brindisi, Guayaquil, Las Vegas, San Francisco, Austin, New York, New Orleans, Cuba, Bermuda, Bahamas, Hawaii, etc… I think we would be curious to play in Africa or in the Middle East.

For very big events like the Formula 1 it is very cool, we have had the chance to be part of something bigger than us and it rises the level of the band to the major leagues.  When you play for the Sugarbowl Gala, the Mardi Gras in NOLA or for a VIP fundraiser at the New York Stock Exchange, you need to have your A game on 🙂 But no matter the size of the event, we always give 100%.

What are the messages behind your albums “Kiss My Disco” and “Supercool”?

There is not really a message behind our albums, it is more about giving music to our fans, a part of our show they can bring home, so they can keep on dancing when they  need their Boogie Fix!

Explain the experience getting to work with Gloria Gaynor among many other celebrities.

Over the years, we had many performers sharing our stage, some are more memorable than others, we actually had to audition to play with Gloria Gaynor, and we passed the test!! But we had many interesting moments like Rick James joining us on percussions, the brass of KC & the Sunshine band or Kool & the gang coming to play with us, or playing the music for Disco Inferno with the Trammps ! We just love it!

Was it intimidating performing for Donald Trump? Were you fired? 😉

We played twice for Donald Trump for his birthday party , it was very impressive to meet the man. We remember that there were so many beautiful girls everywhere. The second time we performed for him he said we were his favorite band. We didn’t get fired, but hired again lol!

What’s next for you guys?

We have a pretty full schedule for 2015, including many shows in Quebec and Ontario, like the 60th anniversary of Elliot Lake where we will play with the Sheepdogs. In August we will be coming back to Toronto to perform at the CNE.  We have a few shows in Europe and the USA as well this summer. Next year is our 20th anniversary, so we will start to prepare that tour as well, we are very excited about it!

What do you hope your band will accomplish in the future?

That is a very good question, since we play all live no sequence, we always look forward to stimulating new projects, like when we played with a symphonic orchestra, or we did concept shows for Just For Laugh in Montreal 2 summers ago. This year, we were hired to play a tribute to the biggest Canadian Disco artists for the 25th SOCAN Gala.

Where can people find your music if they’re interested?

Our music is available online. If you visit our website you will find links to listen to it! Fans can see videos of our live shows and pictures via our social media portals. They can follow us on the road and feel part of the BWB family!