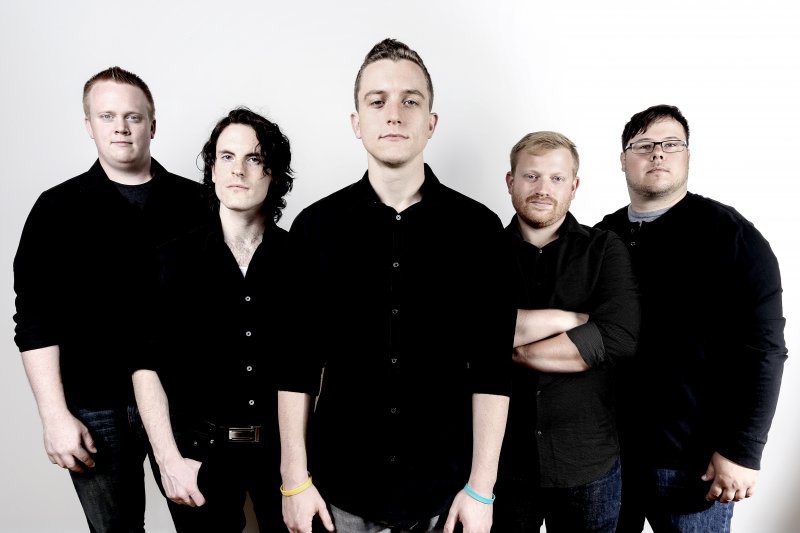 DB Cooper is a five piece indie rock band based out of Toronto. Dan Mauro (lead vocals), Jeff Beemer (guitar, keys, vocals), Darren Marranca (guitar, vocals), Ben Peirson (bass, vocals) and Eric Davis (drums) put indie, pop, and rock influences together to create their music. They have an upcoming EP called ‘The Road EP’ which is due to be released on March 17 sophomore EP and follows their April 2014 release ‘The Catherine North EP’. All of their music can be found on their Bandcamp page, including the new single off of ‘The Road’, “The Election”. Be sure to keep your eye on all of their social media sites below for any news on their upcoming release.

How did the five of you come together as a band? Why did you decide to call yourselves DB Cooper?

DB Cooper: Ben, Eric and Jeff played in a band together a couple years ago. They were looking for a new project so we decided to start jamming. Eventually, we decided we need some more layers so we brought in Darren on guitar and Dan on vocals and the rest is history.

What kinds of things inspire you to write songs?

DBC: It really differs for all of us. Lyrically we tend to write with some form of romantic tongue, but a lot of the songs have hidden meanings. For example, our new single The Election is about voter apathy and a little bit of a love story about Olivia Chow.

DBC: This is one of those things that differs as well. Generally someone comes in with an idea somewhat or totally formulated. We then start playing it together and tear it apart. Its really a matter of taking a song that is fully written, dissecting it, then putting it back together. That doesn’t always work though. Sometimes we just don’t feel like a song is going where its supposed to, so we shelf it and come back to it later when our minds are fresh.

DBC: This is fun too. We really tend to differ in our music tastes, which is likely why everything comes together so nicely!

You worked with Derek Hoffman (The Elwins, Crystalyne, Brighter Brightest) on your upcoming EP, how was that?

DBC: It was really great getting to work with someone with such a great ear. Derek has such an interesting process and it differs from a lot of the way some of us had recorded in the past, so we had to adjust a little, but working with him totally got us to a place we wanted to be with our newest record.

How does your new EP ‘The Road’ compare to your last EP ‘The Catherine North EP’? Can you give your fans any hints on what to expect from your new music?

DBC: The Road is a lot rockier, refined and poppy all at once. We like to consider it polished indie punk.

You recently released “The Election” as a single and video. How was the fan response? Was it what you were expecting? Do you plan on releasing any more videos for this EP?

DBC: So far so good. We want to release two more videos, one for The Road (the title track). Not sure of the other track yet but ideas are percolating.

If someone hadn’t listened to your music before, how would you describe it? Is there any particular song they should listen to first?

DBC: This is the hardest question for a musician to answer you know. “What do you sound like?” “uh…music stuff?” A good representation of polar opposites in our sound would be The Election and Let Go. Think of most of our stuff as falling between those extremes.

As always at Canadian Beats we like to throw in a few fun questions for your fans:

What has been your favourite concert to attend as a performer? As a fan?

Darren – From First to Last and All American Rejects

Jeff­ – I like Festivals generally and try to get out to Osheaga on a yearly basis. Lets hope we’ll be playing it soon!

If you were in charge of a weekend music festival, who would be on the line up?

DBC: All of our influences of course! Seems like it would be Riot Fest of last year. And of course Hologram­Tupac.

What are three things you must have with you on tour?

DBC: McDonald’s Jr. Chickens, Phone Chargers and A leash for Dan (our singer).

DBC: Of course our friends that joined us in our music video: Xprime, Brooklyn Doran, Royal Streets. Some special shout outs to projects Derek Hoffman is in , which are Spells of Vertigo and Brighter Brightest. And all the amazing folks joining us on our album release tour in March; Kasador, Made Them Lions, Big Lonely, JBKD, The Ven Dreddies, Max Keaton, Monarch Project, Growing Irons and Several Futures.

If you had to listen to one album for the rest of your life, what would it be?

DBC: Anything by Kanye West.

DBC: Live Long and Prosper, May the Force Be With you and ET Phone Home.