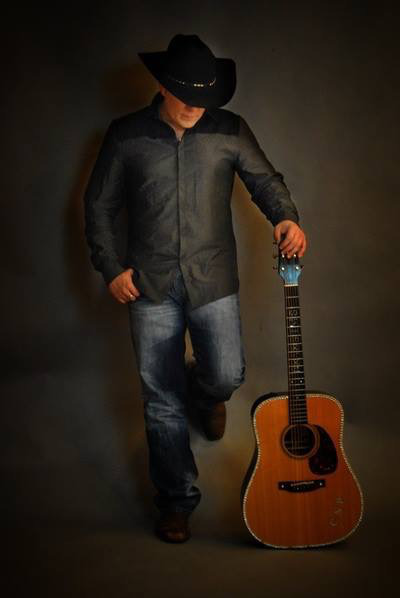 Grande Prairie based country artist, Brad Sims has been making his way into the country music industry, and is no stranger to the stage. He won top prize in 2013 at the Alberta/ BC Talent Contest, as well as Duke’s 2010 Entertainer of the Year. He has released his first single, “She’d Look Good On Me” and is currently working on his first album which is set to be released this year! Want to find out more about Brad? Now’s your chance!

How long have you known you wanted to pursue Country music as a career?

That’s a good question. Ive been surrounded with music my whole life. Both my Mom and Dad sing. I got my first guitar when I was four years old! So you know I really don’t remember an exact time of knowing when I wanted to do pursue a career in Country Music because I don’t remember a time when I didn’t want to (:

You won various contests in the past, including The Next Nashville North Star (2014), Alberta/BC Talent Contest (2013) and Duke’s Country Club Entertainer of the Year (2010), do you think these accomplishments have helped to make you who you are today as a musician?

Definitely! Its made me more confident as a performer and as person as whole! They have given me even more drive to pursue my passion!

Oh Man! I have so many! I grew up listening to George Straight, Highway 101, Mark Chestnut, Alan Jackson and  I still listen to all of these guys,  But, George Jones, Dwight Yokeman Merle Haggard were the 3 biggest influences on me  and they continue to influence my music to this day. As I got older I added Brad Paisley, and of course Garth Brooks to this list!

I listen to a lot of Gord Bamford and Bobby Wills now too!

You have a single on 30 country radio stations, called She’d Look Good On Me, how does it feel to have your song play on the radio?

Sometimes I just don’t believe it still! It’s a pretty awesome feeling. Especially when I see people requesting or hear them request it. When I actually hear it on the radio its something honestly I cant even put into words at this point.  Sometimes I honestly get happy tears in my eyes.

How has the response been for your single from your fans?

They love it! They’ve been incredibly supportive, requesting on radio, viewing online. Even requesting on radio stations not carrying it! Which I love!! lol If it wasn’t for my fan support the song just wouldn’t be doing as well it is. The fans are where its at and I help make me who I am today.

You also have a video for “She’d Look Good On Me”, which can be watched on YouTube, and has gained 7360 views, did you expect this big of a reaction from Country music listeners?

No not at all! Not this fast! Maybe after a year being that its only my first single and music video! Again I have to thank my fans and their incredible support! Within in two days I had 2000 views and this was just overwhelming! It really has been an experience beyond my expectations!

You are currently getting ready to release your album, what can you tell us about the writing process behind the album?

First I should clarify its a 4 song EP. I co-wrote 2 songs on this EP. The other two songs were written by a couple of talented Alberta writers and a guy out of Nashville.

Straight Whiskey the one song I co-wrote came to me quick, and I just wrote it in the bar one night. I was going through a break up and working at the bar I wrote the song at, and my buddy asked me what I wanted to drink and I said “Straight Whiskey” and we looked at each other and knew it was a song! Sometimes that’s just how a song happens.

She’d Look Good on Me is a kind of a funny story lol. Im not an alcoholic but this song started at a bar too!! lol I was hanging with a buddy having a good time and this waitress was serving us all night and at the end of the night as we were toasting each other I looked at my buddy and said about the waitress Damn! “She’d Look Good on Me” (I was single then) my buddy just bout spit his drink on me as I said that and I said “There’s another song you Shrub”! It took me awhile to finish the song and in fact I got stuck and eventually took it to Matty Mckay *Brett Kissels Guitar Player and we spent two days working on and finally got it finished!

What can you tell us about your upcoming album?

lol well its not done yet! For the most part their all upbeat with only ballad. You can definitely hear my love of traditional country but I think modern country fans will enjoy it as well!

Let’s talk about touring, do you have any tour plans for across Canada in mind?

Well Ive got big plans but no big tour across Canada  lol! For now Im concentrating on building my fan base outside of Northern Alberta. I’m really trying to break into the rest of the province and BC/Sask right now.

What can fans expect from  you next?

A new Single to radio and likely another video to go with the single! I’m always looking for and booking more shows so they be watching for those too!

Here, at Canadian Beats we always like to include a little portion of questions that may help the fans get to know you a bit better, here goes:

Who is your all time favorite Country artist?

It’s a tie between Dwight Yoakam and George Jones

Thinking of only Canadian bands/ artists, who are your current favorites?

What is the first album you ever purchased?

If you were asked to do a cover song, which would you choose? Why?

I would choose “Everything That Glitters Is Not Gold” by  Dan Seals. Its one of my favorite songs since I was a little kid. My parents use to listen to this when we went on road trips and I loved it from the first time I heard it!

I can’t thank them enough for all their support! For coming to the shows for buying my song, sharing my posts, sharing my video, requesting my song on the radio, the list goes on! Again I honestly cant thank them enough for helping me achieve my goals so far! I hope they’ll continue to stand by me and Ill continue to make them proud because without them I wouldn’t be where I am today! Love them all!