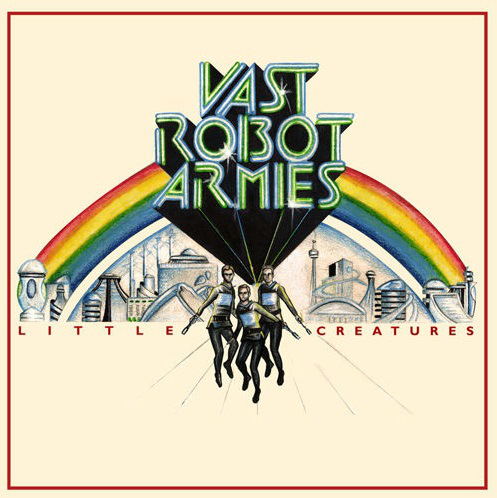 Toronto based rock band, Vast Robot Armies is made up of Jay  Thomson (Vocals/Guitar/Keys), John Agee (Vocals/Bass/Guitar/Keys), Joe Wells (Guitar/Bass/Keys) and Chris Metcalf (Drums). The current line up came to life by the merging of two  bands (Sundiver & Vast Robot Armies), and it was evident that this was the beginning of a new band, then the final piece came later when Chris joined the band, and as they say, the rest is history.

The band released their album, Little Creatures today, and I was given the chance to do up a review and let all of the Canadian Beats readers get the scoop on this high energy album. The album features 10 songs, each full of energy and producing a raw rock sound that is appealing to the ear.

The sixth song on the album, “Foxtrot” was by far my favourite on the album.  I would recommend this song to anyone who likes rock music. It’s one of those songs that you will likely find yourself singing along with.

The other song that stands out to me is the eighth song, “In The Other Room”. It’s not usual for me that the music outshines the vocals, as I tend to be easily pulled in by vocals, but in this song, the music is what pulled me in.

I would recommend this album to anyone who is a fan of 90’s style rock music, mixed with a unique raw sound that makes each song as appealing as the last.