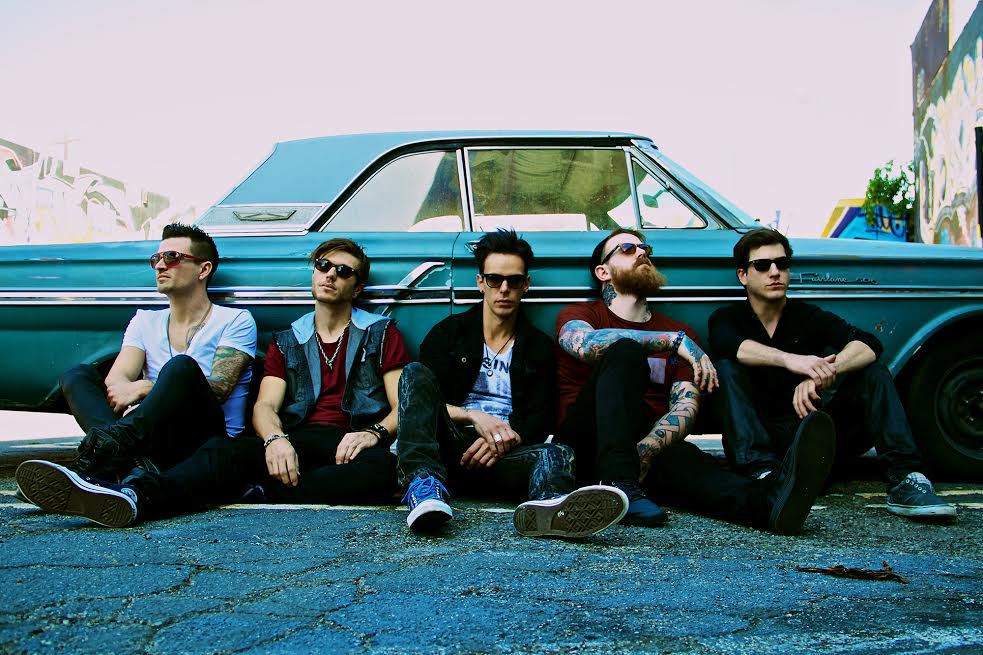 Pop Alternative Calgary based band “The New Electric” are working their way up to becoming a well-known name in the entertainment industry.  They only formed in 2013, and have already worked with names like Kevin Zaruk , Jeff Ojeda from Chief Music Management. They went to Los Angeles and worked with Brian Howes in the summer of 2014, to record their debut EP. They finished recording their Maroon 5, One Republic, and Imagine Dragons sounding EP and it is expected to be released in early 2015.

What inspired your band name?

Our band name was inspired by the idea of everything being new and refreshed. Indy (Bass), Daz (Guitar) and I were in a band prior and have played with James (Keys) and Chris (Drums) in other, separate, past projects. Having a new sound, a new team, a new name and two new beautiful band members made it feel like a new born project. So the idea of, “The New something” came very easily. We were stuck on “The New Analog” for a bit and started rehearsing as such. One day in rehearsal, I was bantering with the back wall and shouted, “Thank you, we are “The New Electric” by accident. Indy, immediately said, “What did you say?” And it’s been the band name since.

When can fans expect new music?

As for a release, at this point, it’s very hard to say. We’ve released a clip of one of our songs, “Inside Out” on our Instagram, @TheNewElectric but have no official release date for our EP or a single. Our team is in the planning process, so our hands are tied until deals are done and dates are set. I’m going to be doing a series of cover videos, to give our most precious fans, a little something ; )

What is the name of your new EP?

The name of our new EP is a discussion we’ve been having for a while now. We have a few great ideas, but Indy is fighting to self titled. That’s a good question for the fans and for you guys! What do you think of a band self titling their first EP?

What is it about bands like Maroon 5 and Imagine Dragons that inspires you?

Things that are inspiring about Maroon and Dragons….Hmmm…. Well Maroon are very hard working and are super adaptable. They’ve been able to re-create themselves and stay as American currency, for sometime now and that’s amazing and rare. Not to mention, great singing, song writing, I just appreciate their quality. Dragons are inspiring in the way of their trueness to the art they create. This band is old school in the sense of, performing on record, developing parts over an organic timely process and then adding the element of the modern edit and programming to create a sick blend of vintage modern. I love their songs as well. The Radioactive still blows my fucking mind!!

What goals do you have for the bands future?

Our goals for the future are simple. We wanna be the biggest band in the world ; ) Short term goals would be, releasing our EP, releasing a single. We wanna tour with all the great Canadian pop bands, Hedley, Marianna’s Trench, Simple Plan etc. We want to play our first stadium as a band and we want to spread to other territories!

What was recording in Los Angeles with Brian Howes like?

Recording with Brian Howes in LA is always something I soooo look forward to. Brain is a friend; ) Not to mention a world class songwriter/producer/guitarist/singer. Yes, I have a #brocrush…. Funny story, the second concert I ever went to was, Finger Eleven with Closure as the opener. So I saw Brian rocking out when I was 18. His song “Look Out Below” was, by far, the best song on the radio, at the time and I was in love with it. So you can imagine my excitement when our manager told me, you’re going to LA to write with Howes. WHAAAAT!!!! Brian is decisive, artistic, mathematical, and experimental in his production approach. He pushed all of us to our best highest self.

LA is one of our favourite spots! Avy (Chris Avalos – Drummer) has a ton of family from down their, so he’s deeply routed. Daz is a Vegetarian and every second restaurant in LA is vegan or veggie, not to mention, he’s from New Zealand and loves to surf. Indy loves motorcycling and LA is warm all year long and has some of the best riding in the world. James lives in LA and works as a session musician full time. He actually just got called in to play keys on a new Hedley track. I love the massive contrasts of people, housing, life and the diverse equality/inequality. Basically, anything you’re looking for, It’s in LA.

Are there any countries you would like to tour?

Personally, I’d love to tour The UK. I just have a believed connection to Ireleand, England and Scotland. I gotta see that shit before I die. I’m guessing that Daz would wanna tour New Zealand and Australia for obvious reasons ; ) I’m not entirely sure about the other guys. If there’s any one specific country they fantasize of touring, but I do know that everyone in the band is dying to tour Canada again!!!

Where can fans hear your music?

For fans to hear our music, they’d have to go to our Instagram, @TheNewElectric and hear our clip of “Inside Out” or check out some of my cover series on our YouTube channel, https://www.youtube.com/user/thenewelectricTV The first video will be posted Friday the 27th of Feb.

Hey peeps!! This is Kyle from The New Electric. Thank you so much for your patience and support! Our recent blow up of Twitter fans has meant the world to us and we’re doing everything we can to get our music to your hearts and hands!! Be sure to keep up with my cover series on our YouTube channel ; ) #muchlove