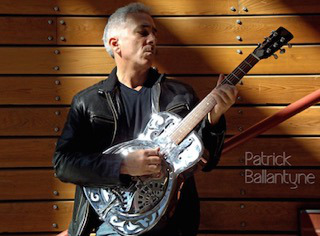 Patrick Ballantyne is a folk/rock/country artist from Windsor, Ontario. He recently joined the Northwood Records family and has released his newest single “She Loves A Man”. His last album ‘Days of Rain’ was released in June of 2014, and has been re-mastered for its new home with Northwood.  We had the opportunity to talk to not only Patrick to check in on how he’s doing since we reviewed his album, but also to ask Northwood Records a few questions as well. Be sure to check out the review and the social media links for both Patrick and the label below.

First of all, congratulations on signing with Northwood. What made you decide to sign with them? Were you looking to be signed with a label, or did it just happen?

Patrick Ballantyne: There was a fair amount of happenstance, actually. I’m a big fan of Ambre McLean, who is also with Northwood. She and I worked on a new song recently and we got to chatting about Northwood. One thing led to another and here we are! I wasn’t really looking for a label, but Matt Connell at Northwood is prepared to help me get material out in a very supportive way. My main music gig is songwriting but I really enjoy recording. This will give me an opportunity to release music that might otherwise stay in my basement!

Patrick is certainly a great addition to your roster of artists. What made you decide to add him to your label? What do you look for in new artists?

Northwood Records: Here at Northwood, we’re always on the lookout for new artists that will enrich the fabric of the label. We’ve been familiar with Patrick catalogue for some time, and more recently had the chance to be a part of the co-writing process between Patrick and one of our other artists. It was shortly after that, that Patrick began telling us about his interest in releasing some new material, one song at a time. The renewed interest the industry has given to releasing “singles” has been an interest shared by Northwood Records since it’s inception; serving both the future’s demand for consistently fresh material, and music’s past golden age of hit songs delivered on 45’s. It was this discussion that ultimately led to the partner ship between Northwood and Mr. Ballantyne, and we are very excited for the chance to be working with him.

Do you have any advice for artists trying to break out onto the Canadian music scene?

PB: Be aware of trends, then go in the opposite direction. Chasing what is popular will leave you frustrated, so be your own person. What makes you unique as an artist is YOU, so refine YOUR art, not what you think others want from you.

NR: With the constant changing state of the music industry, one rule has and always will outshine any other – make good music. Focus on that first and the rest will come.

You’ve been named Best Songwriter of 2014 by Now readers, how did you feel when you heard this? Did you expect it at all?

PB: Extremely humbled and thrilled. When you see Ron Sexsmith, for example, among the other nominees, honestly, I was thrilled to just be mentioned with him. Winning was certainly not expected.

You’ve written with many names in Canadian music. Are you continuing with that or are you focussing more on your own projects?

PB: My main focus will always be working with other artists, and contributing what I can to their careers.  Northwood Records has graciously given me an avenue to release songs that haven’t yet found a home elsewhere.

How was the fan reaction to ‘Days of Rain’?

PB:  The feedback has been amazing. Those that commented all seem to select different favorites…a song that moved them in some particular way, or resonated with them at a particular point in their life. The album is best listened to, and was designed to be listen to, as a whole. Some songs flow into the next with a break. As a kid, I enjoyed putting the headphones and getting lost in an album. I tried very hard to create that same vibe with ‘Days of Rain’. Clearly, however, in an era of ITunes and downloading single songs, it can be tough to find time to listen to an entire album from beginning to end. I think it’s worth it though!

Why have you decided to revamp Patrick’s older music and re-master ‘Days of Rain’? Is there going to be anything extra added to the newer versions of the albums?

NR: This was actually more Patrick’s idea than anything. Anybody who has every made a record(even ones that they are immensely proud of…) knows about the collection of little regrets, or lists of “things I would have done differently if I had the chance”. Patrick saw this as his chance to change some of those 20/20-hindsight issues, and we were happy to help him seize the opportunity. Beyond these types of little enhancements, each one of his older albums has been bundled with a never before heard bonus track.

You also released a new single on February 13th, “She Loves A Man”. How have the fans reacted to the new song? Were you a little uncertain about releasing it a Friday the 13th?

PB:  Matt and I laughed about that release date…I could say that it reflected both the joy of true love (Valentine’s Day) and the fear and uncertainty of any relationship (Friday the 13th). But, of course, the calendar just fell that way this year. “She Loves a Man” is the antithesis of the rather sombre “Days of Rain”…it’s a little bit silly, upbeat…with a rockabilly vibe. I really like the song and so far the reaction has been enthusiastic!

Is there anything coming up for Patrick that you can give his fans a little hint on?

NR: Let’s just say that beyond looking forward to Patrick’s output of recorded music, we are looking forward to seeing how his songwriting may have the chance to influence the catalogues of some of the other artists we work with…

PB: Thank you for listening to and buying music I’ve had a hand in writing. I’m aiming to have lots of new songs out this year through Northwood Records so keep an eye (and ear) out! www.hitamonth.com