By Remington Fioraso on February 24, 2015@https://twitter.com/RemingtonFD 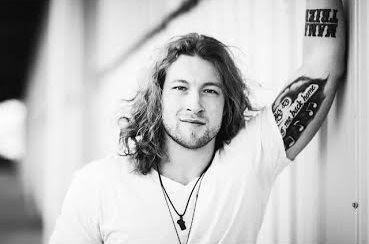 Cory Marquardt is a country-rock singer from North Bay, Ontario. In July 2014, Marquardt released his first single “Smartphone” to iTunes, country radio, and Youtube. In January and February of this year, he toured with King and Cash and Aaron Pritchett on the Outlaws and Outsiders tour. Later in the year, he is set to release his debut album entitled “This Man.” Keep on reading to find out more about the singer!

CM: I have many influences from many different genres but if I could pick a hand full as an artist. Merle Haggard, Eric Church, Elvis Presley, Vince Gill, Glen Hughes/David Coverdale.

What inspired you pursue music?

CM: I’ve always had a passion for music and fate has always guided me to it. Once I picked up a guitar, starting writing and realized I could make a living doing this. There was no turning back now knowing that feeling of singing to country music fans and crowds. The best feeling in the world is hitting that stage and playing to a sold out crowd. I’m hooked!

What were your favourite memories from the Outlaws and Outsiders tour?

CM: There are very many and some I don’t think I can share with you haha. Overall I think my favourite memory happened in Medicine Hat, Alberta. Long story short I noticed with only about 5 songs left in Aaron’s set, Jayson Brinksowrth our monster drummer on tour wasn’t looking to hot from where I was side stage, enjoying a Jack and Ginger and after 3 attempts of what seemed like him waving me over to him as he played I went behind the curtains walked behind the drum kit on stage and he yelled in my ear “Dude! You have to take over! I’m gonna F’n jet puke all over right now!” After a quick chuckle I realized he was dead serious. So without missing a beat we switched positions and I hopped on the kit to finish the other half of  “Done You Wrong”, the look and smile on Aaron’s face was priceless haha and from that show on the band and Aaron agreed to make this part of every show. Every show after that for the remaining of the tour Aaron would call me up to play drums for his hit song “Hell Bent for Buffalo”. Jayson came back after “Done you wrong” to finish the rest of the show and rocked!

How was the recording process like for your upcoming debut album, ‘This Man?’

CM: It’s always such a cool feeling to see and hear your songs come alive. Working with a great producer like Danick Dupelle from Emerson Drive makes that process even sweeter! I think we turned this album into a monster. My team, Danick and I are very proud and confident in this record and believe we have a new sound with a new edge and it’s Me.

Are there any particular songs that you are most excited for fans to hear?

CM: I’m very proud of every song on this record and the feedback regarding the songs are very humbling and great to here. For me I think songs like “21”, “This Man”, “Nowhere with you”, “Take you home tonight” and “Smartphone” are killer tracks with a new and unique sound. My sound, the sound I’m going for with an 80’s rock/90s country mix.

Your new single, “21,” will be hitting iTunes and country radio in April.  What can you tell us about the single?

CM: With big production, heavy guitars and drums along with a cool lyric. “21” is another rocking anthem type song with that new edge I’m talking about. I think people and country music fans are really gonna get me and this new sound after hearing this one.

In traditional Canadian Beats fashion, here are some fun questions to help fans get to know you a bit better!

What is your favourite phone app?

CM: I don’t really have one but if I had to pick it would be anything that helps me make my social media posts easier. Facebook, Twitter and Instagram. Songza is another good one I use it a lot when I work out.

Who is your favourite hockey team?

CM: The Marquardt family has always been Leaf fans. I know, I know it’s a little tough for us right now. But I’m also a Boston fan seeing my brother played 2 years in Providence, RI in the AHL for the Bruins farm team.

CM: FOOD haha…If I had to pick 3.. Pizza, Sushi, Chicken with mixed veggies and rice.

CM: I think the first album I ever bought was for my Mom. It was Easter and I got her “18 til I die” by Bryan Adams. The first record was either “Down to earth” by Ozzy Osborne or Pantera’s greatest hits I know it’s far from country but these dudes rocked and where The Cowboys from hell! RIP Dimebag.

CM: There is so much talent in Canada that isn’t recognized but the 1st names that come to mind and that I was raised on would be Rush, Bryan Adams, Celine Dion, Shania Twain, Blue Rodeo. I also have great respect for an amazing group and family by the name of “Leahy”. Saw them live 3 times and they are truly amazing.

CM: To my fans. I love you all and can’t wait to rock you! Please like and share my official social network pages. I will see y’all in a city, sometime, someday, somewhere. Jump on this crazy train for one hell of a ride!