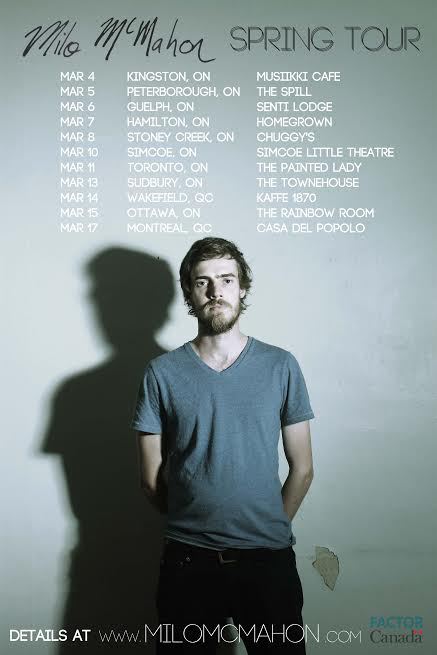 Milo McMahon is a solo rock artist from Montreal, Quebec. He is hitting the Canadian roads in March in support of his newest EP ‘Gone Too Long’ which was released in October. He is stopping at 11 cities in Ontario and Quebec in the first two weeks of March. With influences such as Neil Young, Sam Roberts and Pink Floyd, he is definitely an artist you need to check out. If you want to learn more about this solo rocker, check out his social media below.

You released your EP ‘Gone Too Long’ a few months ago. How did the fans respond? Was it what you expected?

Milo McMahon: Hi there 🙂 Reaction to the EP was beyond what I had expected. I sort of expected a few of my friends would check it out and maybe show some of their friends, but it seems to be spreading beyond that, which is exciting. It was a bit of a step forward for me as a producer as well as a songwriter and I took a few risks… luckily some of those risks seem to be paying off.

What are some of your inspirations when writing songs?

MM: I’m inspired by those little stories that happen in life that make you feel alive. Falling in and out of love is a common theme in all music because the emotional rollercoaster hits you like a freight train and you ultimately can’t help but step back and be grateful for the experience, good or bad. So tapping into those magical moments is what it’s all about for me, lyrically.

Musically, I always tend to be inspired by whatever I’m listening to at that time. I think nowadays people tend to fill their iPods with a vast array of songs from various artists and listen to a constant shuffle. I much prefer to spend time listening to a few select albums start to finish. So if I’m revisiting a Radiohead album that week, a new song might have a more Radiohead-y feel. This week I’ve been spending a lot of time with the record “Chet Baker Sings”, so I’m gravitating towards a more soft-spoken kind of sound.

MM: My process typically involves sitting down with a guitar first thing in the morning, before I have a chance to eat or think about anything, and either coming up with a completely new chord progression or developing one of the two or three that I’ll have kicking around at any one time. At a certain point I’ll start humming along or scatting, maybe even singing makey-up words until a melody presents itself. This often results in one really good lyrical line, which will likely end up being either the very first line of the song, or the chorus. Either way, the rest of the song gets written around that.

When I’m actually writing the songs I really try to clear my mind and let whatever thoughts or ideas are happening at that time just flow. I used to sit down with a guitar and put pressure on myself, like a voice in my head was yelling “Write something genius right now!” But that style just doesn’t result in the type of honest lyricism that I strive for. So it’s all about being clear-headed and devoid of intention in that moment.

I came close to doing other things, at one point I almost became a lawyer. But over the years it has just become more and more clear that this was what I was meant to do. I’m the type of person who is crazy enough to believe that anyone can do anything that they put enough care, dedication and hard work into. So at the outset I was asking myself, “what makes you think you could have a successful music career?”. That question has since evolved to “What makes you think you can’t have a successful music career?” There doesn’t appear to be an answer to that question, so here I am.

If someone hadn’t listened to your music before, how would you describe it? Is there a particular song they should listen to first?

MM: We’re currently describing ourselves as Alternative Folk Rock. I’ve experimented with a lot of genres over the last 4 years or so, but this is the description we’ve landed on for the time being. If people listen to my debut album Big City Hustle they’ll hear a wide range of genres, from Beastie Boys-esc rap-rock to Neil Young-esc folk to Garage rock and a whole bunch of flavours in between. With the touring that my drummer Mike Beaton and I have been doing, the sound has become more and more focused.

As a band who are going to have a lot of people listening to us for the first time, we knew we had to make our strongest song the first one on the latest release. So as such, I’d point people towards “Gone Too Long” as a tune to check out, and hopefully they’ll dive a little further down the rabbit hole to see what’s there.

You’re going on tour in March. What can fans expect from your live show?

What has been your favourite concert as a performer? As a fan?

MM: Well… we had a lot of very, very memorable shows on the last two tours of Ontario and Quebec that we did in the fall. The EP launch in Toronto was my favourite show I had done up until that point, then a few days later we finished up the tour in Montreal with an awesome hometown crowd at Inspecteur Epingle, which was even better. We’re playing Casa Del Popolo in Montreal on March 17th, the last date of this upcoming tour. Something special happens every single time I play that venue. So I have a feeling we could have a new fave by then…

As a fan, I saw Arcade Fire in a 1,000 seat theatre in Dublin the day that Neon Bible was released. It was, and still is, the best show I’ve ever seen.

What are some things you can’t go on tour without?

MM: Last tour I brought 4 books and didn’t read a single page. Mike and I bring sleeping bags and roll-out mats and often crash with friends and fans who we’ve met over the last couple of tours. That’s a super fun way to tour. It’s also a good idea to bring a backup T-shirt, in case the main one breaks down.

MM: It would start with a set from Sun Kil Moon, during which he’d hopefully tell us all to shut up or something. Wilco would then take the stage, followed by Arcade Fire. Then Radiohead would rock it, with Kendrick Lamar bringing the evening to a rowdy end. Or so we would think. Then all the original members of Pink Floyd, including holograms, would come back for a final rendition of The Wall.

MM: We’ve got a new song called Who I Knew where I loop a guitar riff at the end of it, then rip a solo over top of that. It’s the only one like it in the set. We’ve also been closing with I’m On Fire, which is great fun cause I’m basically yelling as loud as I can at the end of it.

MM: It’s “All I Need” from Radiohead’s In Rainbows.

Are there any Canadian artists/bands that you would recommend to your fans?

MM: Yeah I would tell people to check out my friends Suuns. They’re experimental rock from Montréal. Some other Montréal bands people should check out are Blood & Glass and Sunfields. The Nursery are a cool band from Toronto who’re playing with us at Casa in March. And as a bonus Wyvern Lingo are an all-female band from my town in Ireland who’ve got some of the most beautiful vocal harmonies you’ll ever hear.

MM: Yeah I just want to thank everyone so much for your support over the last year. This has been a wild ride. Also want to thank anyone who takes the time to check out the music. Means the world to me.