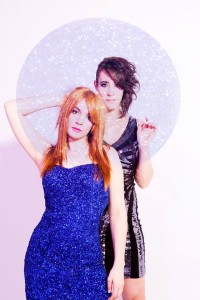 Calgary, Alberta Indie-Avant/Pop duo “Sidney York” first started as a long-distance collaboration between opera singer Brandi Sidoryk and bassoonist Krista Wodelet. “Sidney York” performed at big events both in and out of Canada, such as the 2010 Vancouver Olympics, SXSW, Canadian Music Fest, NXNE. They performed at BIGSOUND in Australia, Music Matters in Singapore, and Reeperbahn in Germany. They have shared the stage with many big named artists, most recently with Rich Aucoin and Carly Rae Jepsen. They were named Best Untapped Newcomer at the Calgary Folk Fest and will be featured in a documentary called “Tracks on Tracks”, which highlights ten Canadian musical talents on a musical adventure across the country aboard a VIA Rail train. Their newest album called <3s (Hearts) is an album in five volume. It is available in Canada and the US; the final volume of the album was just released on February 10, followed by the all-inclusive full-length.

How did you come up with your name?

Brandi: When I first started writing indie pop music, I was still performing and studying opera. “Sidney York” (a pseudo-anagram of my last name) became my musical alias, to separate my classical music world from the pop music one.

Krista: When Brandi and I met and started writing together, I was primarily playing in orchestras as a classical bassoonist. We decided to keep the name Sidney York as our band name as a reference to our secret double lives – which are not so secret anymore!

How would you describe your sound and the term “indie-avant” to someone who’s never heard of you or that term before?

Krista: I think qualifiers like “indie” and “avant” are a nod to the unusual instruments we use – it’s definitely uncommon to see bassoon and French horn in a pop band. But at the end of the day, that’s what we are – a pop band!

What was it that influenced your careers as an opera singer/bassoonist and now performing as a duo?

Krista: Though Brandi and I are both trained classical musicians, we’ve always loved pop music. It was a much more natural transition than it might seem. I think the fact that we both have similar musical upbringings has definitely helped us as a songwriting team, though – we can read each others’ minds a little bit sometimes!

Brandi: Yes, the mind reading helps. It’s because Krista and I are usually in the same musical headspace when it comes to writing. We think like classical musicians, and we often approach our songwriting and rehearsing from a perspective of classical music tradition.

What was your favourite thing about performing at festivals such as NXNE and Reeperbahn?

Brandi: Showcasing at festivals is always a chance for us to play with bands that we normally don’t play with—and to reconnect with our “band friends” that we haven’t seen in awhile. At Reeperbahn, we got to catch up with Boreal Sons and Ann Vriend; at NXNE, we played and hung out with Human Kebab of USS and the Gay Nineties. Basically, it’s social hour in and amongst performing—our two favorite things : )

Krista: Plus, we get to see some very cool cities from the inside out. When you travel to perform, it’s different than visiting a city as a tourist – you have experiences you never would have had otherwise, including meeting other local bands! When we were in Singapore for Music Matters, one of the highlights was hanging out and collaborating with local band The Sam Willows in their living room – definitely a side of Singapore we would not have seen otherwise.

Krista: Tracks on Tracks was exactly as fun as it sounds – a bunch of musicians playing and partying on a train for four days. We made some of our most valuable band friendships on that train! It was the first time we ever met Shred Kelly, and they’re still one of our favourite bands ever, musically and personally.

Brandi: There is nothing more breathtaking than travelling across this country by train. And to travel across it with some of Canada’s most talented musicians is humbling and exciting all at once.

Are there any challenges you have faced career-wise?

Brandi: Are there any challenges we haven’t faced? I think that being an artist is two parts creativity and three parts struggle. It’s hard to realize the other without experiencing both.

Krista: A particular challenge I think is reconciling the business side with the artistic side. As an independent musician, you are a small business, and you have to be smart about how you run it – but you also need to leave yourself room to write, play, and create, because that’s why you’re here in the first place. This can be doubly challenging for female artists. It’s still a male-dominated industry, on both the artistic AND the business side, and to be respected in both worlds is a delicate balancing act.

What went into recording “Hearts”? What was emotionally behind the album?

Krista: <3s is mostly a breakup record. We didn’t set out to write one, but we both just happened to be going through some tough splits when we were writing the record, and it bled its way into our songs. You wouldn’t necessarily know it on first listen, though – we love wrapping dark lyrical content in a sparkly pop shell!

Brandi: But to take it only at face value with that first listen would not have the full effect. This album truly takes on the form of the “fake it ’til you make it” breakup mantra: you pretend everything is just fine on the outside, to mask the intense level of emotion simmering beneath the surface.

Krista: Smarties! I’m very Canadian about this. I like them just because you can’t get them anywhere else.

Brandi: While I am usually an avid fan of anything Canadian (just ask anyone about my TV tastes to verify this), I would take M&Ms over Smarties any day.

Krista: Neither – but I can drink an entire case of Club Soda in one eight-hour road trip and still only make a single pit stop. It’s kind of my superpower.

Brandi: I’m with K on this one—plus, I don’t drink pop, so I’m not even too sure if Coke and Pepsi taste different from one another!

Krista: Both? I MAY have actually thought they were the same company until right this second.

Brandi: My style is varied to say the least, but if I had to choose, I would say Aritzia. Full disclosure: I have shopped at neither.

Brandi: Twitter! I am usually very long winded, but Twitter has taught me the art of being concise. Now, I am only slightly long winded : )

Krista: Can I be difficult again and say Instagram? I don’t care if they’re painfully hipster – filters make everything pretty.