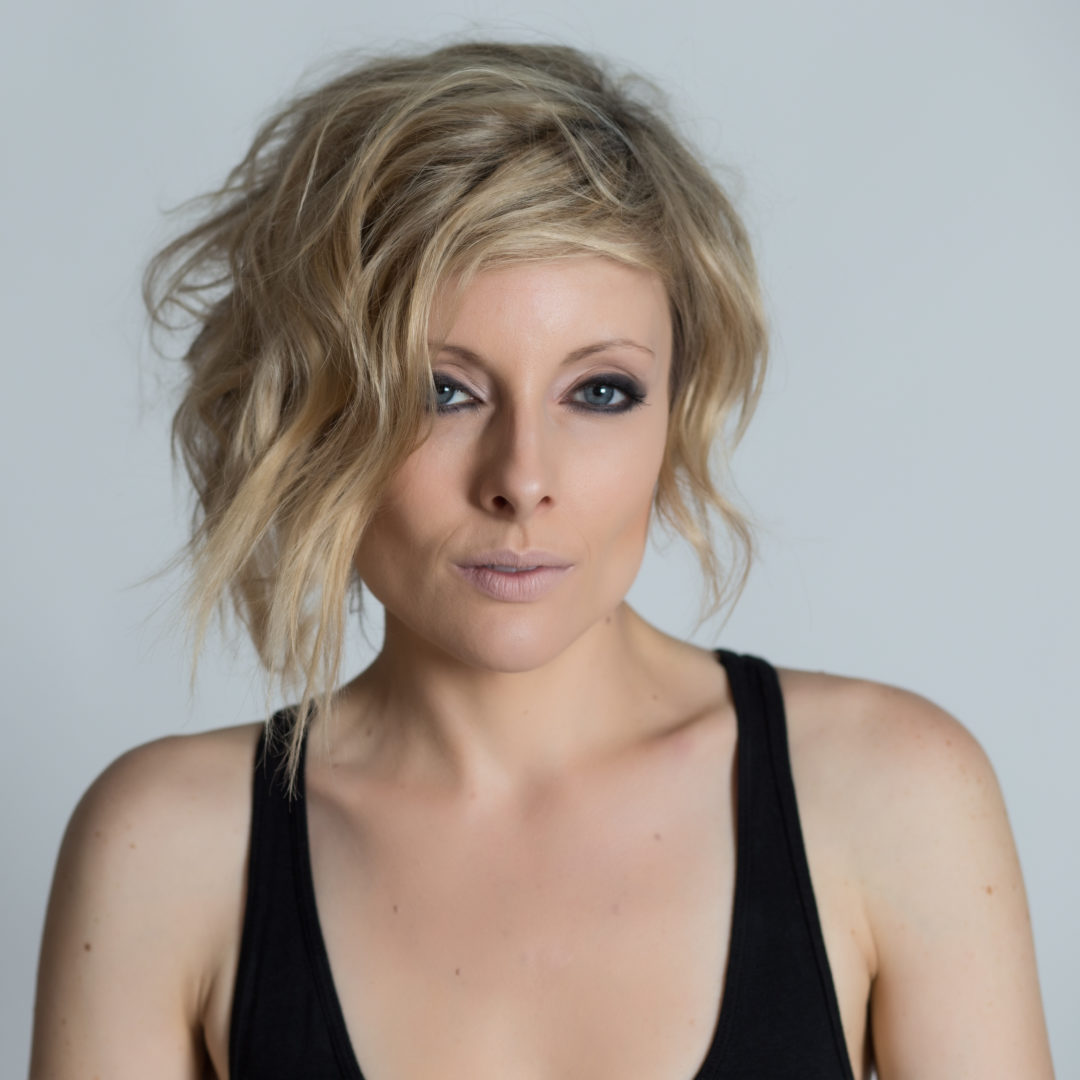 Pop/Rock singer Christina Martin was Born in Florida, and raised in New Brunswick. She says her Father and MTV got her enjoying many types of music. She moved to Texas in 1999 and then moved to Germany to work on various music projects. In May of 2000 she moved back to Texas to perform and write. When she returned home, she had small success when two of her songs were placed in the award winning BC TV drama “Sex Traffic” and “Snakes and Ladders” Her Second album “Two Hearts” was released in 2008. It attracted attention and award nominations. The music video for “Two Hearts” was #5 on the Much More Music countdown. Following that, she went on her first national and international tour. Her song “You Come Home” was repeatedly heard on the 2010 teen drama series “The Best Years”. For her third album “I Can Too”, released in 2010, Christina collaborated with Blue Rodeo’s Greg Keelor. In 2011 she worked on building her own Canadian label called “Come Undone Records”. She worked with pledgemusic.com to release acoustic versions of songs from her first three albums. Money from this project went to the CMHA. That same year, she was nominated for the 2011 Digital Artist of the year, at the 2011 Music Nova Scotia Awards. ”Sleeping with a Stranger” (released in 2012) is Christina’s newest award winning album. It was nominated for 3 East Coast music awards. Her Fifth album “It’ll Be Alright” is a 10 song collection, expected to be released Feb 24, 2015.

You credit your father and MTV for leaning you towards liking certain music, but what was the factor that played a role in you becoming a singer?

CM: Since I can remember, but behind closed doors, I would mimic famous musicians and try to match their tone and style, artists like Michael Jackson, Whitney Houston, Annie Lennox, Tom Petty. I just enjoyed the music and enjoyed how it made me feel to sing along. I always enjoyed the idea of writing short skits and entertaining people with stories, I even wrote music when I was very young on piano. But around age 10 I became more of an athlete. It was years later that my girlfriends in High School encouraged me to sing while we were intoxicated. It was their coaxing that led me to join a local cover rock band called Headrush when I was 14, and with them I sang Alanis Morissette, Beatles and Joan Osborne covers. At 19, after my first summer in Austin Texas, I bought an acoustic guitar and starting writing and singing my own songs.

Why did you choose to go to Germany to work on music projects?

CM: Well, I tour quite a bit in Germany, but I have yet to record a project there. I went to Germany as a nanny in 1999, and met some producers that year that gave me work singing Pop music in their studio. After that year, I returned to Austin Texas for three years, and so I’ve really only worked in North America on music projects, either in Austin or in Nova Scotia. I studied German Language and History in University to maintain the language skills I had learned while working as a Nanny in Germany. I was also interested in returning to Germany and playing music there some day. I didn’t realize that it would turn out to be a really supportive region for my music.

“Two Hearts” got a lot of attention. What was it like hearing songs from the album used on TV shows and getting award nominations?

CM: Hearing songs of mine on a TV show can be great if it means more people in the world are hearing the work that my band, my producer and I have done. Award nominations can be good for business, especially winning awards, however they are not always a measure of great art. I don’t like the idea of people sitting around a conference table deciding what music from my peers is worthy or not of a nomination. However, when a nomination or award comes from a genuine respect for the art or work, or from the people that listen and enjoy your music, that feels good.

Describe what going on your first tour was like?

CM: Going on my first tour was pretty much like riding a rollercoaster. The tour began slow, playing coffee shops in Nova Scotia and New Brunswick after a packed album launch at FRED in Halifax in May 2008. Then I came back a few weeks later to play two energizing shows opening for Matt Mays and El Torpedo at the Marquee in Halifax with my band. Then returning to the grind, I drove to Quebec and Ontario, playing some pretty sparse shows, ending my tour in Toronto at a cool and cozy bar I used to play on Queen Street West called Not My Dog. I remember doing some cool interviews along the way, the tour made me a bit of cash, and I was starting to build an email fan list. All of this was pretty exciting to me, and encouraged me to book a tour in Western Canada in Fall 2008, which went better than expected. The tour ended with a feeling of excitement and relief that I had actually accomplished what I set out to do, and established an insatiable hungry for touring. I loved touring by myself back then, it gave me a lot of time to focus and listen to my favourite tunes in the car, and I found myself writing again while touring. It was also my first realization that you work your ass off to put out a record properly, and you finally get to realize your dream and see if you are supposed to continue doing it. I’ve always relied on the public’s feedback to determine whether I should continue recording music. I knew we had done a record I was proud of with Two Hearts, but there isn’t much meaning in pushing the music out into the world if it isn’t having a positive effect on others.

CM: Greg was wonderful to work with in the studio. I don’t know him as well as Dale does, but in a conversation back stage at The Carleton in Halifax, he offered to sing on my record I Can Too after I told him I was recording with his buddy Dale Murray. I had only known Greg casually through Dale, met him at the Horseshoe in Toronto in 2010, and he was always extremely easy to talk to and down to earth. Greg came into Dale’s studio one day while he was on tour with Blue Rodeo, and he just nailed this vocal part on a song called ‘Subject To Change’, a song inspired by the poetry of Canadian poet Alden Nowlan. He also offered to play the baritone guitar part, and he nailed that. We knew that song would be a great fit for Greg, and I came to find out after the session, that Greg was also a fan of Alden’s work.

Why did you decide to donate proceeds from your project with pledgemusic.com to the CMHA?

CM: I was a volunteer with CMHA in 2003 for many years, so I have been able to see first hand that CMHA social programs have a direct positive affect on people’s lives. Being involved with CMHA and also studying psychology in University helped me better understand my own struggles with anxiety and grief, and mental illness in my family. I continue to try to find ways to support CMHA and other great causes, as they supported me during difficult times.

What can fans expect from your new album?

CM: I hope that fans will enjoy listening to this album in its entirety, perhaps with a cup of coffee as they put the vinyl on the turn table and sit back to take it in. I did try to select songs and write lyrics that would resonate with people. Fans who have enjoyed Dale Murray’s guitar work in the past; will be blown away from his solos on songs like ‘I’ve Got a Gun’ and ‘Puppet Museum’. There is certainly a pulse throughout the record that gets below the surface. I think all of the musicians really pushed themselves in the studio, so I can only hope that fans will listen and fall in love with the songs and want to come to the shows.

For someone whos never heard your music how would you describe your sound?

CM: I’m terrible at describing my own sound, so I will steal Rich Aucoin’s recent quote
“Feels like I’m listening to Stevie Nicks filtered through the modern production and energy of an indie guitar toting powerhouse band like Phoenix or Spoon” Rich Aucoin

Who in the music industry do you look up to?

CM: I despise both… but I did sneak in a Big Mac this new years eve at 3AM.