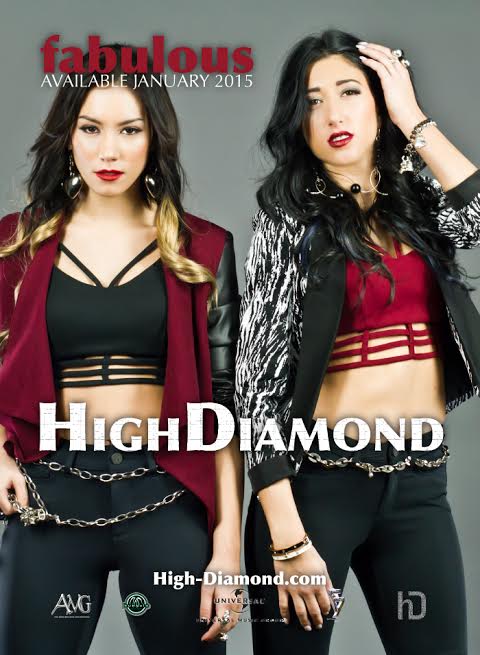 The last time we talked with Kitchener sister duo High Diamond was in August of 2013, shortly after they released their first single “Broken”. The dancing and singing duo of Angela and Catina have been busy making new music and performing for thousands at events such as Youth Day in Toronto and the TeenFavz Awards. They released their newest single “Fabulous”, which is available for streaming and will be available for purchase soon. Check out this interview to see what the sisters have been up to and what’s coming up next for them.

The last time we talked to you was a few months after you released “Broken”. Did you expect the level of success it brought? Were you surprised?

High Diamond: It was very exciting to see Broken make it onto the top 100 pop hits chart! As our first single we didn’t really know what to expect but that was amazing! We really focused on building our fan base and making a mark in the music scene here in Canada!

You performed at events such as Youth Day in Toronto. How was that? Would you play other events like that again?

HD: Youth Day was such a great experience! Especially for our first time performing as HighDiamond! Events and performances like that are why we do what we do! Entertaining our fans and putting on a show is what we were born to do!

You also performed at the TeenFavz Awards. Was this the first award show you performed at? Was it what you expected?

HD: We’ve performed at award shows before but it was our first time performing as an artist and not a dancer! We mostly knew what to expect but being on the other side was nerve racking and exciting all at the same time!

What else has happened to you since we last spoke?

HD: We are currently in the studio recording our first album for the release of early summer 2015! We just dropped our latest single Fabulous, which is the first song off of the album to be released and we are looking forward to release the music video for Fabulous!

You recently released your single, “Fabulous”. How was the fan reception of the song? What was the inspiration behind it?

HD: Fabulous is all about individual power! Girl power in our case! Being happy and confident with who you are in your own skin. Not feeling the need to depend on someone other than yourself. – We have received great feedback since the song was released Jan. 13, 2015! We’ve been told that its catchy, fun, empowering and makes you want to get up and dance!

What’s coming up next for you guys? Can you give your fans any hints on any future tours or new music?

HD: As mentioned earlier, our album will be released in the summer of this year! Our music video for Fabulous will be out in the next month! Before Fabulous was released to the public we posted a link on our Facebook wall so our fans could get a sneak peek of what was coming for them! Get in touch with us on our social media and you will always be ahead!

HD: We can’t thank our fans enough or show them how much we appreciate and love them and their support! Keep it up because you are both our inspiration and motivation! Shine bright diamonds! – HDxx