By Lindsay Newman on January 28, 2015@https://twitter.com/lindsaynewman_ 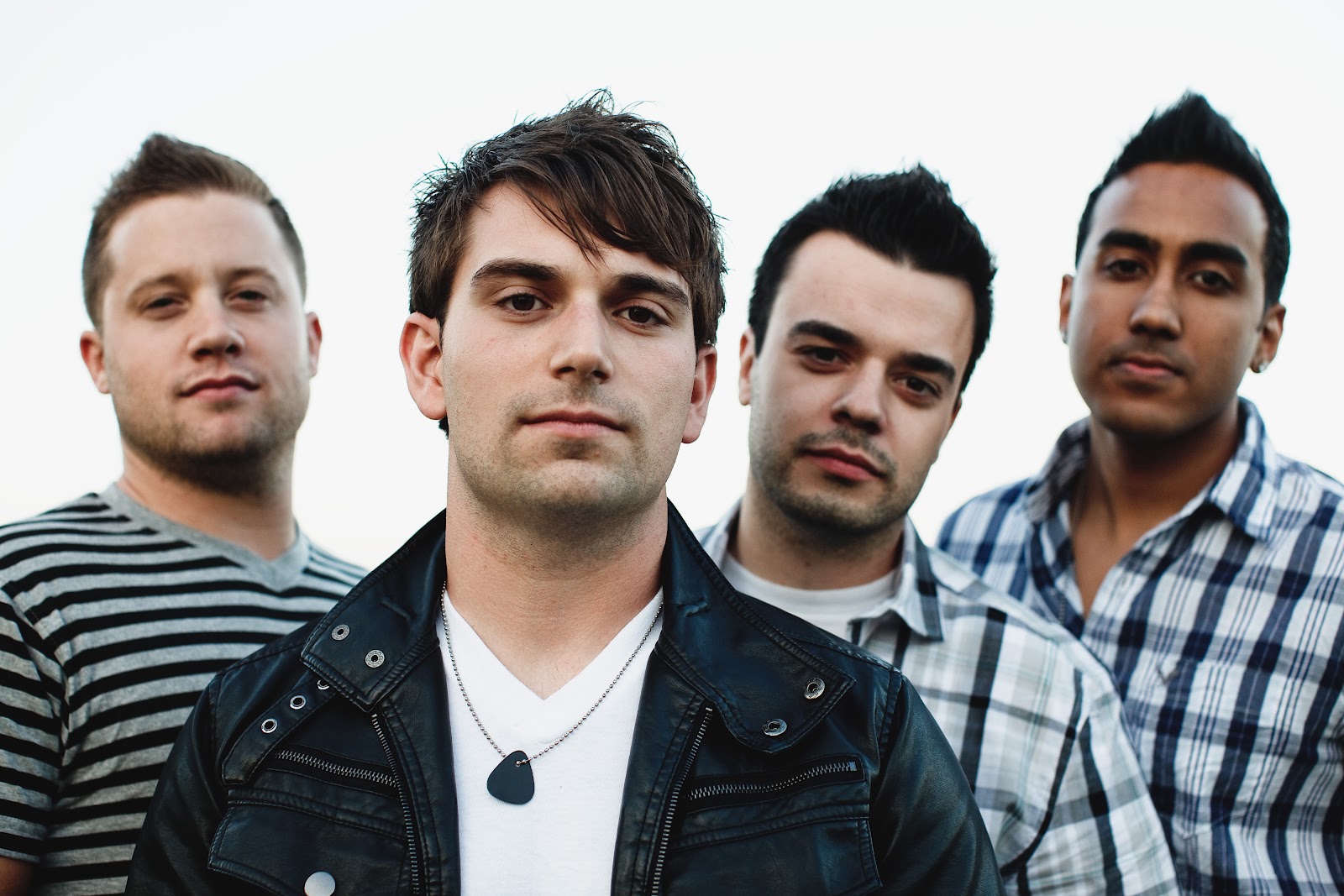 Breaching Vista are a rock band from Kitchener, ON. The band formed in 2007 and they are currently signed with Bright Side Records. They released their debut album back in 2011 and have been playing shows across the province since the album came out. I had a chance to conduct an email interview with lead vocals/guitar, John Maksym.

Mike and I met through the local music scene, playing in different bands back in high school. There was one show in particular that my band at the time, Klutz, was playing, and he was there assisting the sound guy for the night. When our drummer was late arriving to the venue and we couldn’t sound check, Mike quickly jumped on the drums and played some Green Day with us for the sake of sound checking all of our instruments. From that point on, Mike and I remained friends, and a few years later, being the multi-instrumentalist that he is, Mike filled in on bass for a 3-week tour with my then band, Close To Home.

Al, Nik, and myself all went to the same high school, though we are each 1-year apart (me being the oldest/wisest). They played in a band together, and our bands would often play school assemblies together which led us to developing a friendship and mutual respect for each other as musicians.

Should we be expecting some new music from you guys?

The short answer: yes. We’re not quite sure on a timeline for releasing anything just yet, but we have been working on some new music. Our main focus right now is to just keep writing and demoing, and if things continue to progress the way they have been, we should have some really great songs on the way.

What are some of your influences for your music?

We all share a common interest in 90’s music as we grew up during that decade, and in our opinion, some of rock’s greatest bands came out of that era. We’re also big fans of the early 2000’s, so I think our music is highly influenced by a combination of the two eras. Bands that seem to have had a major influence on our progression as musicians and songwriters would be Green Day, Nirvana, Bush, Silverchair, Coldplay, Our Lady Peace, Third Eye Blind, Counting Crows, Blink 182, Taking Back Sunday, Brand New, and even some of the older rockers like Bruce Springsteen and Styx.

While those bands have helped us to shape our sound based on the music we love, most of the influence on our songwriting content comes from personal experiences. I’m the lead songwriter of the band, so the majority of our catalogue was initially written by myself, and then completed collectively as a band. I’ve found inspiration from watching movies, hearing stories, meeting and interacting with people, looking at people from an outside perspective, failed relationships, current events in the news, just about anything I’m exposed to could potentially spark a songwriting idea. Sometimes I enjoy writing completely fictitious stories/songs, which allow me to explore ideas and places that I’ve never been to myself and can really help me get the creative juices flowing.

What was the writing process like for “Vera City”?

The writing process for “Vera City” spanned a long time. When the band started in January 2007, I had already penned a few of the first Breaching Vista songs, not even knowing they’d become BV songs. At the time of recording our first EP in November 2007, we picked the 4 songs that best represented the band at that point in time, out of a handful of available material. Some of the songs that we didn’t feel fit the EP, we saved to use on Vera City. Two of which I can specifically remember being “Reverie” and “Tonight”.

The two acoustically driven songs on VC, “Nervous” and “Letters”, were both written back in 2006, during a period where I was writing and performing as a solo acoustic artist. “Nervous” often found its way onto my set list, but I considered “Letters” to be a b-side track that only existed as a poorly recorded demo. At some point between 2008-2009, I played the “Letters” demo for Mike, and it seemed to really strike a chord with him. He insisted that I play it for the rest of the band, and from that point on we began developing a full band arrangement of the song, which found its way onto Vera City.

The rest of the songs on Vera City were written between 2008-2010, where we had ample time to spend working, reworking, and fine-tuning each one individually until they felt just right. During that period the band saw many highs and lows, all of which helped inspire elements of the writing, and really helped us band together in the pre-production phase as well as entering the studio. Two songs that stand out to me are “Sleep” and “Give Me A Reason,” because they were constructed in completely opposite ways from each other.

“Sleep” may have taken the longest to write from start to finish. For as much as I love sleeping, I struggle with the idea of going to bed. I’ve been known for staying up long hours (often writing songs between 1-3am) and at times it catches up with me. I remember sitting at my desk at work, so tired that I could barely keep my head from falling onto my keyboard, and the words and melody for “Just let me get some sleep” suddenly coming to me. I quickly jotted down the line and knew that I was about to begin writing one of the most important songs of my career, but I was just too tired to focus on it at that moment. I wanted to make sure that every line written was the best possible line that could be used, and so I decided to record a demo and listen to it on repeat while out jogging. It took me an entire summer of daily jogs to finally complete writing the verses for Sleep, but it was a very fulfilling experience and it helped me get in great shape.

“Give Me A Reason” was the combination of parts of 2 different songs that just seemed to blend well together sonically as well as in their content. One song was generally about the end of the world, and the other song was about some personal feelings I was battling at the time, being unsure if I wanted to continue playing in the band, but leaving the band would feel like the end of my world. Two days before heading into the studio to start recording VC, I showed the guys both of the partial songs that I had started, and somehow we came to the conclusion of combining the two. Within a couple hours of reworking the songs, we wrapped up band practice with one complete song and were so energized by it that we convinced our producer that this song had to make it on the record. We fine-tuned it while in the studio and it’s collectively one of our favorite songs on the record.

We ended up with somewhere in the area of 18-20 songs ready to record, but carefully selected the 12 songs that best represented the band at that time, and we included a short intro track to kick off the record.

For me, there wasn’t one thing that happened that made me want to pursue music. It was a combination of things that started with my Dad playing his Bruce Springsteen and Rolling Stones records for me at the ripe age of 3 yrs old. I’d bounce around on the couch singing a long to “Born in the USA” and “Dancing in the Dark”. From there my parents bought me some toy guitars and I would dress up in a cape and mask with a little red electric guitar and pretend to put on a show. Fast forward to my 11 year old self, and I suddenly became interested in taking some guitar lessons. My Dad had an old acoustic under the bed, so he gave it to me to get started and from that point on I never looked back. Once I started playing and learning some Green Day songs, I found myself idolizing the way Billie Joe Armstrong (of Green Day) could perform and captivate an audience, and I just started envisioning myself on stage in his shoes.

Our focus is on writing new songs, and getting back into the studio. It’s been 5 years since we started recording Vera City, so we know we’re due for something fresh. That being said, we are pushing ourselves to create our best music yet, so we’re excited to see what comes out.

Spring and summer festivals are always on our “to do” list, so we’re hoping to book a few of those this year and have a chance to showcase some of the new music that we’ve been working on.

You played Big Music Fest back in July, what was that experience like?

Festivals are a lot of fun for me personally because I love playing on outdoor stages, with big sound systems, on beautiful days. Not every festival ends up being that, but in this case BIG Music Fest was all of the above and then some. It was by far the largest stage we’d ever set foot on, and getting to play was a huge adrenalin rush.

Just knowing that we were sharing the same stage with music legends like Slash, Aerosmith and Bryan Adams, helped add to the surreal experience that weekend. I’ll never forget walking towards the massive stage, up the 3 levels of ramps to the back stage area, and finally stepping out on that monster sized stage. There was enough room for 10 bands to set up and play. The complete set up from the ground to the lighting trusses was 5 stories high, just incredible.

At Canadian Beats we like to throw out some fun questions so fans can help to get to know you better.

If you could see any band alive or dead who would you see?

What is something a fan wouldn’t know about you?

When I’m on stage, I like to have all eyes on me (or on the band as a whole), but once I’m off stage, I prefer not to be the center of attention. I’m a very social person, but I’m not one for making a big scene, I like to keep things low key. I love having one-on-one conversations with fans and getting to know a little about them.

Is there anything you would like to say to your fans before we finish?

Thanks for taking an interest in what we do. We appreciate your support and absolutely love to write music, record, and perform for you!