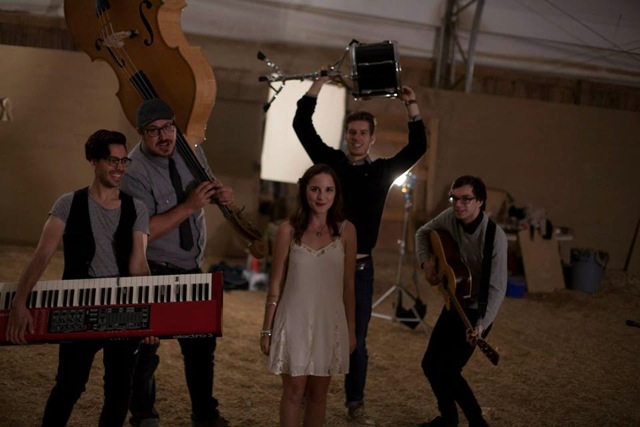 Brooklyn Doran is a Toronto based folk singer-songwriter. I had a chance to ask this talented lady some questions about her EP, her new single and more, and now you’re the lucky ones that get to read and learn more about her background and her future plans!

Let’s start with some background, when did you first get into music?

BD: For some reason, this is always the toughest question for me to answer because my introduction to music (and songwriting) came in stages. I’ve been singing ever since I could talk, but I only first picked up the guitar when I was an exchange student in France at age 15. I was just picking up the language and because I wasn’t too well versed in French, it made me a bit shy. There was a guitar in the bedroom I was staying in with my host family, so I spent a lot of time channeling my energy into that. Fast forward to 2012, when I just graduated from theatre school and was eager to perform and write. I was gigging all the time at theatre fundraisers & events and then something clicked. It was one of those cheesy romantic “It was always you… It was you all along” moments. Music and songwriting was always just under my nose, and once I found it, its become one of my most valuable creative outlets.

Were you always pulled towards Folk music? Who have been your biggest musical influences?

BD: The majority of my music tends to land in the “contemporary folk” category, but I think I’m pretty lucky to have been exposed to a large variety of music and genres over the years that have definitely informed my work.

That being said, I REALLY dig folk music. Growing up in Kenora, Ontario (which is pretty near to Winnipeg) I was able to discover a TON of great local and international music from the Winnipeg Folk Festival. In the early 2000’s, before platforms like Bandcamp and Soundcloud were really driving how people were finding out about new music, I was buying CDs from artists I heard at the Fest.

You released an EP entitled “There’s A Light On” last year, how was the response?

BD: The response has been overwhelming! To see such support and love for something that I’ve spent so much time and energy putting together is really heartwarming. To look out into the crowd and hear people singing the words I’ve written back to me is one of the best things. EVER.

What was the best part of putting together the EP?

BD: This was my first EP, and so every part of the process was new and exciting. From recording, to mixing to mastering, I felt like I was learning really valuable information each step of the way that I hope to put towards my next record. What I consider the best part of putting together the EP was the ability to collaborate with a group of incredibly talented artists and people in the recording industry. We were able to take heartfelt songs I wrote in my bedroom and build them into fully realized sonic ideas. I’m pretty happy with how everything turned out.

BD: It’s pretty different for each song. Sometimes I labor over a song for a while before it feels finished, and sometimes a song will form itself entirely in my head on a walk home. I do some of my best songwriting on my bicycle. I figure that if I’m biking fast enough, people won’t notice how loud I’m singing until after I’ve sped by. 😉

You recently filmed a video for your single, “There’s A Light On” which was filmed inside an old barn, how was this experience?

BD: We filmed at the Elmwood Polo Farm in Port Perry, which is this huge barn. Horses would poke their heads in through the windows while we were filming, and there were barn cats and ducks. I attribute the video to an incredible team of emerging filmmakers led by director Kyle Marchen and producer Van Wickiam. They are both absolute dreams to work with and I trust their visions when it comes to the world of cinematography.

Can fans expect any live dates in the near future?

BD: I’ve got a few shows in the works for spring. I’m pretty excited to be working with a not-for-profit music initiative this March called Headquarters Cooperative. They’ve been starting to curate shows in the Toronto music scene and I really like their philosophy about supporting local musicians and building our city’s pretty stellar community of local artists.

BD: More videos! The video for my second single “Lansdowne” is being released in late February and it was all shot in Toronto. I also shot live videos with Current Sessions Productions recently for a few songs that have only ever been sung live- so it’ll be pretty sweet to have a record of that so fans from abroad can take a listen to my newest material.

Here at Canadian Beats, we always like to include a segment of “fun” questions, so to begin, what was the first album you ever purchased?

BD: Hanson’s Middle of Nowhere. I was 7 when it came out and I had such a crush on Zac.

If you were to put together a tour, which other Canadian bands/ artists would you want to include?

BD: I’ve been thinking of touring for a while now and so has the keyboard player in my band Mike Tudisco. He’s currently in the process of recording a bunch of new material under his pseudonym “Mikey Disco” and we were thinking of hitting a few dates in Southern Ontario this summer.

If you were asked on the spot to perform a cover song, which song would you choose? Why?

Who was your idol while you were growing up?

BD: My mom. She led by example and showed me about how to be a supportive friend, instilled in me a positive work ethic, and taught me to have fun and the importance of laughter. Does everyone say their mom? Moms are pretty darn awesome.

Choose one word that you think explains your sound.

BD: Winking? Sometimes I feel like my songs are a bit of a wink to those who know some of the stories I’m singing about.

If you find yourself at home alone on a day off, what would you be doing?

BD: I’d be in the bathtub with a giant mug of tea and reading a book, or wearing sweatpants, eating Chinese food and binge watching Netflix.

BD: Thank you. You are the drivers and tastemakers of the music industry today and with every “like”, “share” or “retweet” and every evening that you brave the cold to pay cover to see a local artist, you are shifting the attention of the industry onto those artists. Your support means more now than it ever did, and I’m so glad that you’re with me on this journey.