Interview – Laugh At The Fakes

By Remington Fioraso on January 25, 2015@https://twitter.com/RemingtonFD 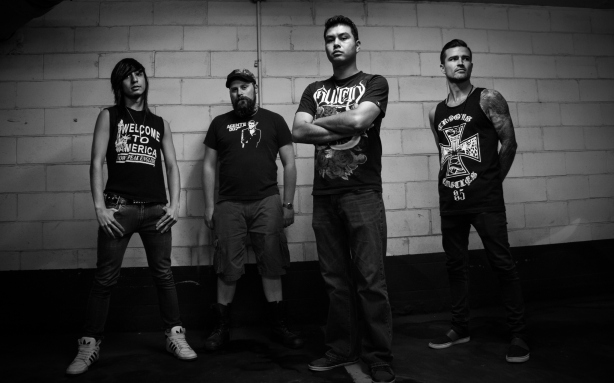 Laugh at the Fakes is a rock-metal group from Toronto, Ontario. The band consists of Everett Mason on guitar/vocals, Galen Weir on bass, Kevin Daliri on guitar, and Chris Avalos on drums. Laugh at the Fakes released their first full-length release entitled “Dethrone the Crown” on November 18, 2014.

I’ve known Galen (bass player) for many years. He was my next-door neighbour in the house I grew up in. Kevin responded to a guitar add we posted last spring and has been in the band since July. Galen and I knew Chris from a previous band we were all in. So we reached out to him in August and he has been playing with us ever since.

What inspired you name the group ‘Laugh at the Fakes?’

When I put this group together, my goal was to start an uncompromising rock band. I knew by naming the band ‘Laugh At The Fakes’ that we would be vowing to stay true ourselves and to our fans. It’s not only a band name, it’s a statement that seems to be more and more relevant with every person you meet or place you go. You come across genuine people and fake people all the time.

Iron Maiden, Black Sabbath, Pantera, ACDC, Alice In Chains, Led Zeppelin, Guns n’ Roses, the list could go on forever but those are the main ones.

For someone who has yet to listen to you, how would you describe your sound?

We are a rock and roll band that is influenced by thrash metal. I love the songwriting of bands like The Rolling Stones and Guns N’ Roses but then I also love the riffs that bands like Slayer, Pantera, and Metallica come up with. So why not have a band that has both.

How has the reception been for Dethrone the Crown so far?

We have been getting some good press, which is something you don’t really count on. But it’s nice to get the recognition. We just have to keep the momentum going! Countdowns and reviews are subjective but you can’t help but enjoy reading them when they are complementary. Some of the people reviewing it sounded like real fans, they understood what we were going for and they really dug it. Lots of them don’t get paid to do reviews or anything, they just spread the word because they love the music.

Are there any particular songs that you enjoy performing the most from the record?

Dethrone The Crown and Got No Regrets.

What have been some of your best show memories in 2014?

Our first show of the year was opening for Ex-Iron Maiden singer Blaze Bayley, so that was awesome. We also played 2 shows at the Bovine (Toronto club) and we are definitely getting tighter with each show. We weren’t playing shows while we were recording the album, so we didn’t have many shows last year. This year we are going to take a break from the studio and just play live.

What can fans expect to see from Laugh at the Fakes in 2015?

Lots of tour dates, a couple of new videos, and some new songs.

At Canadian Beats, we like to include ‘fun’ questions to help fans get to know you a bit more.

What is your favourite album?

What songs have been on repeat the most for you?

What are your New Year’s resolutions?

Keep laughing at the fakes. You guys rule!